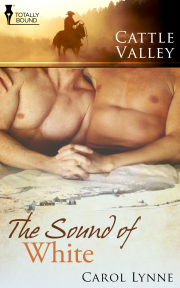 The Sound of White

Book 8 in the Cattle Valley series

Finally healed after a beating that almost took his life, the last thing Richard Johnson needs is to be attracted to Chad Neal. He's got a bar to open and a heart to mend.

Despite his smaller stature, Tall Pines Lodge Manager, Chad Neal, needs to be in charge, both in the bedroom and out. So why is he attracted to a six-foot-three man who looks like he could rip the limbs from Chad's body?

Electrician, Collin Zeffer, longs for the kind of relationship he sees his friends have, but who would want someone as boring as him? When he meets the reclusive Abe Cross, Collin decides maybe there is someone made especially for him.

Hiding his face from the world, Abe Cross is content to live out his life alone. His cabin in the woods above Cattle Valley seems like the place to do it. The last thing he needs is a sexy as sin electrician showing up to remind him of what he can never have, but when an unexpected blizzard blankets Cattle Valley and the mountains above it, his life, and the lives of the three other men, will change forever.

The Sound of White

“Goddammit!” Richard yelled, running his fingers through his hair. He knew he’d left his tool-belt on the bar before going to his room. Eight hours later, the belt was nowhere to be found.

“Yeah. Lots. Have you seen my tool-belt?”

Collin’s eyes scanned the room. “Nope. Haven’t run across it. You losing stuff again?” Collin asked with a chuckle.

“There ain’t no losin’ about it. I put that damn thing right here before going to bed,” Richard roared, slamming his fist on the bar. Collin held up his hands. “Sorry.” The tall slender man turned back to the electrical outlets he had been working on.

Feeling like shit, Richard walked over to stand behind the kneeling man. “I didn’t mean to yell at you. It’s just this seems to be happening a lot lately.”

Collin nodded and looked over his shoulder. “That’s okay. We’re all under the gun to get this place up and running by New Year’s Eve. It’s natural to become forgetful with the stress you’ve been under.”

Richard didn’t correct Collin. Sure he’d been under a lot of stress, but he sure as hell wasn’t going crazy. The phone attached to the holster on his hip began to play “Friends in Low Places.”

Looking at the display, Richard rolled his eyes. “What do you want?”

“Good morning to you, too,” Chad Neal, the lodge manager greeted.

Richard simply gave the little prick a grunt and waited.

“Is there something you’d like to tell me?” Chad finally asked.

Go to hell came to mind. “I don’t have time for this, Chad. What do you want?”

“One of my employees found something of yours in room three-thirteen. Again.”

Richard’s jaw dropped. That was the second time in less than a week something of his wound up in that particular room. “Look,” he said into the phone, “I don’t know who’s fuckin’ with me, but I’ll tell you the same thing I told you the other day. I haven’t been in any of the rooms except for my own suite.”

“I’m not going to argue with you, Dick. I’ve got better things to do with my time. I’m simply calling to say that your property is at the front desk should you actually do something that requires it. The only thing I ask is that you close the windows next time. I’m not about to authorise an insane heating bill because you’re trying to heat the entire outdoors in this god-forsaken wilderness.”

“First of all, Mr. Miami, my name’s Richard, not Dick. I believe we’ve had that discussion before. Secondly, if you don’t like Wyoming, get the hell out.”

Richard grinned as Collin stood and looked at him wide-eyed in surprise. No one talked to the lodge manager that way. Although small at barely five-foot eight, Chad Neal was a force to be reckoned with. He’d already earned the reputation of firing people on the spot for anything from insubordination to being late. Thankfully, Ezra and Wyn owned the Grizzly Bar and not Guy Hoistington. Richard didn’t know if he’d be able to handle someone like Chad being his boss. Hah. I bet it kills the man to know he has no power over me.

“I call ‘em as I see ‘em,” Chad replied. “I’ll be up on the third floor in fifteen minutes. You can pick up your equipment then.”

After clipping the phone back into its holster, Richard shook his head. “They found my belt in three-thirteen,” he told Collin.

“Seriously?” Collin asked, his face losing some of its colour.

Collin shook his head. “There’s something about that room that creeps me out.”

“Why? It’s just a room like the forty-nine others.”

Collin ran his hand over the back of his neck. “No, it’s not like the others. I’ve redone the wiring in that room four times.”

“I don’t know. Things seem fine for a day or two then everything just stops working. If I didn’t know better, I’d say that room had rats in the wall...or ghosts,” Collin added.

Richard laughed. “You’ve been watching too many horror movies.” Looking down at his watch, he motioned to the door. “I’m gonna go pick up my stuff. I want to get all the lights installed before Guy, Ezra and Wyn show up on Thursday.” On his way out, Richard looked around the large open space and smiled. The Grizzly Bar had come a long way since its inception, and he felt proud of the work he’d accomplished. In keeping with the lodge theme, the bar was rustic with the outer log walls left exposed. The copper, lantern-style lights would look absolutely perfect hanging from the overhead beams.

Wyn and Ezra had gone to a great deal of expense to add extra heating to the area in front of the soaring two-story windows. Richard smiled when he remembered that particular discussion. Well, argument was more like it. Wyn insisted they have the extra heat if Ezra was going to go ahead with his plans for the wall of glass. Ezra tried to disagree, saying the large pit fireplace in the centre of the bar was enough extra warmth. Wyn would have none of it. Insisting that if people came inside from skiing, they’d need to get warm. If they couldn’t do it in the bar, they’d find some place else. Of course, like most of their ‘discussions’, Wyn won, and Ezra had put in three times as many heating ducts in the area in front of the windows.

Walking through to the large lobby, Richard headed for the front desk. His beloved belt lay haphazardly on the gleaming wooden surface with a note attached in Chad’s scrolling cursive.

5 out of 5! Ms. Lynne has created a story that is an action-packed mystery that fulfills everyone's desire for holiday spirit with a little bit of heat thrown in.

I enjoyed getting to see more than one couple featured. There was a nice set up for the next book at the end and what looks to be a future pairing was also introduced so I have that to look forward to. I...

Share what you thought about The Sound of White and earn reward points.