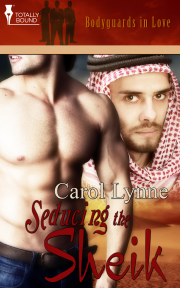 Book 5 in the Bodyguards in Love series

It's a daily battle for Prince Ali Zahar to hold power of Jurru. After two men from Three Partner's Protection are injured while guarding him, there's only one man left who will take on the challenge, Gavin Burk.

With no friends or family, Gavin lives his life volunteering for dangerous missions. He's learned not to get close to anyone and as a result leads a very solitary life, but the passion stirred by Prince Zahar threatens the control Gavin has worked so hard to maintain.

Before Gavin has a chance to come to terms with his desires, he and the prince are forced to take shelter alone, in a hidden fortress, deep in the desert. There, Gavin's control is tested and fails. Life will never be the same for the ruler and his bodyguard.

Browning Automatic Rifle in hand, Gavin Burk slowed his breathing. Whoever the intruder was, he would be welcomed through the view of his scope. If the dumb fucker was trying to sneak up on him, he was doing a piss-poor job.

Gavin had been replacing shingles, when his perimeter alarm had sounded. He"d gotten off the roof and behind the boulder in seconds, waiting.

"Gavin?" a familiar voice called through the heavy timberline.

"Ahh, fuck." Gavin relaxed his grip on the rifle. It had been almost ten months since he'd spoken to his friend.

"What're you doing here?" Gavin got to his feet and waited.

As graceful as a wolf, Jack Drake stepped out of the brush and grinned. "I figured someone should check on your raggedy ass, Grizzly Adams."

Gavin had been in the business long enough to know a lie when he heard one. "Might as well come up to the house. I've a feeling I won"t get rid of you until I hear you out."

Jack stopped walking and bent over, bracing his hands on his knees. "Give a guy a chance to catch his breath, will ya?"

"Pussy," Gavin grumbled, scratching his beard. He turned and started the three hundred yard walk to his hidden sanctuary. He'd been damn lucky to find the perfect piece of land to call home. He smiled to himself. Actually, luck had had little to do with it. He'd purposely looked for an area out in the middle of nowhere to avoid people. Gavin glanced over his shoulder. But they still managed to intrude from time to time.

Reaching the small four room cabin, Gavin left the door open and hung his rifle beside the front door. He had already set about making a pot of coffee when Jack finally stumbled into the living room.

"Damn," Jack panted, pushing off his backpack and collapsing on the couch.

"Fuck you. I've been hiking for three days to get to your little hidey-hole."

Gavin left the pot to do its thing and joined Jack on the sofa. "You should've called. I"d have driven the snowcat down and picked you up."

"I would've if you'd invest in a damn phone!" Jack growled.

Laughing, Gavin gestured to the ham radio set-up on the desk. "I've also got a satellite phone. Guess I forgot to give you the number."

"Get comfortable why don't you?" Gavin drawled. If anyone else had come barging into his solitude with a surly attitude, Gavin would've shown them the door, but Jack was different. Some things you put up with on principal, and Jack was one of them. Jack had been the one person to put his life on the line to try and save Dusty when the CIA had failed to protect him.

"Coffee?" he asked, when the familiar beep of the automatic coffeemaker sounded.

"Sure." Jack carried his boots over and set them by the front door.

From his position in the small kitchen, Gavin watched Jack as he made the rounds of the living room, studying Gavin"s gallery of photographs.

"You're getting damn good at this," Jack remarked.

"Hope so. They pay me big bucks to know what the hell I'm doing." Gavin carried two mugs into the living room and set them on the coffee table he"d made by hand. He joined Jack in front of a series of snowscapes he'd captured in black and white the previous winter.

"Not particularly. Average, I guess." Gavin knew he was leading up to something.

"Ever think of your time in the desert?"

"Nope." It wasn't exactly the truth, but the dreams he still had of the desert were anything but pleasant. Gavin turned and sat in his favourite chair. "What's going on, Jack?"

Jack moved back to the couch and picked up his coffee. "I have a favour to ask."

Gavin narrowed his eyes. Despite all Jack had done for Gavin, he'd never once asked for anything in return. The fact he asked now, didn't bode well for Gavin refusing. "What"s that?"

If Its anything like her other books, it will be a great book, as well as a wonderfull, and funny story. Can't wait to read it. Just finished Taming Black Dog Four, that was an wonderfull book and I...

Ms. Lynne has continued her action packed series with this fast paced and riveting story.

Share what you thought about Seducing the Sheik and earn reward points.