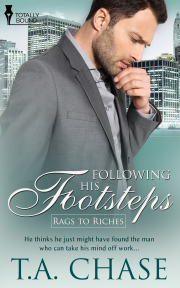 Book 3 in the Rags to Riches series

Being just like his father is what scares Winston the most.

Winston Tennant came to New York to work. After burying himself in his job for the several years, he’s afraid he’s becoming like his father. Cold and indifferent, Winston’s father only wanted his son as a way to continue the family line. When Winston came out, he was disowned. His best friends do their best to keep him from his father’s fate. And when Winston meets Patrick Gaverson, he thinks he just might have found the man who can take his mind off his work.

Patrick Gaverson never imagined that Winston Tennant, head of the London office of Bellamy International, would be interested in a mere personal assistant like him. Yet after a not so subtle set-up by his boss and his best friend, Patrick finds himself on a date with Winston. He discovers that Winston is a lot more down to earth than Patrick thought.

Falling in love so quickly shouldn’t be easy, but Patrick’s willing to take a chance that it will last more than a week.

“How do women do this?” Patrick flopped back on the couch, arms and legs flung haphazardly as he tried to focus his spinning head.

“Do what?” His twin sister murmured from where she sat at the dining room table, surrounded by papers and magazines.

“Keep all this wedding crap straight.” He motioned at the entire living room area covered in paper, fabric and flowers. “It’s madness. Obviously the wedding coordinator gene skipped me when I was born. But apparently you got whatever gene women get so they can organise a wedding in three months without freaking out.”

She snorted. “The only reason I’m organised is because I’m used to multitasking. Some women get the wedding gene. Some don’t. Why do you think I’m still not married, despite Mom’s best efforts? And besides, you should be used to doing five things at once, working for Bellamy.”

She had a point.

“Why is this so complicated? Why couldn’t Ion and Adrien just elope like normal people?” Patrick shook his head.

“Adrien’s mother would kill him if he did that,” Patrice commented. “Besides, there’s nothing society loves better than a big, gay wedding.”

True. Adrien’s mother had thrown herself into the planning with abandon. Yet she’d been very good at listening to what Ion and Adrien wanted. She hadn’t got out of hand so far.

“Unless it’s Big Gay Ice Cream, and that’s where I think we should go now. I need a treat after going through all these bridal magazines.” Patrice shoved a pile of them away before turning to glare at him. “Why in the world did you agree to help?”

He shrugged. “Ion’s my best friend. What else was I supposed to do?” Patrick pushed to his feet then wandered over to where Patrice sat, wrapping his arm around her shoulders. “He’ll do the same for me when I find the man I can love and we get married. He’ll also help you out.”

“I know that, silly.” She smiled then said, “I wish Mrs Vasile hadn’t turned into a bitch, because I know she would’ve loved to help out.”

Patrick thought about Ion’s mother and how she’d turned her back on her youngest son simply because he loved a man. It was doubly difficult because Ion’s father had been willing to accept Ion’s relationship with Adrien for what it was. Of course, Ion’s father wasn’t a very contrary man, so Ion had been rather shocked to find out that his father had gone against his mother’s wishes and didn’t particularly care who his son loved. That his father was willing to go against his mother to keep in touch with him had surprised them as well.

“I know. Mom would never walk away from us. Hell, she ran out and joined PFLAG the moment I came out to her and Pop. She’d be jumping into the middle of any wedding plans.” Patrick thought about his mom and how excited she would be if it were either him or Patrice getting married.

“Yes. Well, come on.” After standing, Patrice grabbed her purse then gestured for him to follow her. “Let’s go.”

He made sure he had his phone, wallet and keys before heading out. They were hailing a cab when his phone rang. Checking the number, he grinned as he answered. “Hey, Ion, how’s it going, honey?”

Ion sighed, but Patrick could hear happiness underlying the exhaustion. “It’s going well. Just can’t wait until these finals are over.”

“You can do it. I’m sure if you ask, Adrien will let you take time off to study, so you’re not burning the candle at both ends.”

A cab pulled up to the kerb, and Patrick waited until Patrice had got in before he slid in. She gave the driver the address.

“What are you up to right now?” Ion asked.

“Patrice and I are on our way to Big Gay Ice Cream to get a treat. Why don’t you come and join us?” he suggested, knowing Ion needed to take a break from classes just as much as Patrick needed a break from the wedding stuff.

Ion hummed for a second then said, “Can Adrien come along?”

Patrick rolled his eyes, even though Ion couldn’t see him. “Yes, Ion, Adrien can join us. We like him, so it’s not like you’re forcing his presence on us. If we didn’t, we would’ve never offered to help you out.”

“Well, he has a visitor, so he’d have to come with us as well.” The hesitation in Ion’s voice caused Patrick to frown.

“Why do you sound unsure about it? Who is this visitor?” Patrick couldn’t think of anyone that would worry Ion.

“He wasn’t supposed to arrive until Monday, but he flew in early because he needed to get away, I guess. Jesus, does everyone’s family drive them crazy?”

Patrick chuckled. “We all reach a point in our lives when our parents or siblings push us over the edge from time to time. We just deal with it and move on. Bring him along.” A thought hit him and he gasped. “Are you trying to tell me Winston Tennant, the head of the London branch of Bellamy International, is in town already?”

I really liked the characters in this book. Both Patrick and Winston are likeable men. The story moves along pretty smoothly. The deep attraction between the two men keep it a fas...

I think these are stories that can be enjoyed when you are looking for a bit of mindless entertainment. They are not deep thinking sort of books. They are short and sexy (a lot of sexy – a whole lot...

Share what you thought about Following His Footsteps and earn reward points.

Other books in the Rags to Riches seriesView Series Page