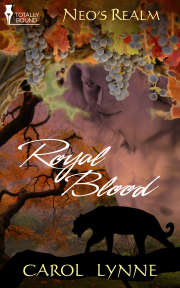 Book 4 in the Neo's Realm series

Will Nialo be able to put retribution aside in the name of love, or will his anger and untapped power rip The Realm apart?

Spiro Manos ruled over the Realm of Blessed Creatures for centuries in his brother's stead. Time spent solving everyone else's problems helped divert his mind from his own. Bound to a powerful but lost god, Spiro has spent a lifetime alone. Although sexual diversions have kept his body satisfied, his soul has never known the touch of the one lover he was born to satisfy.

Betrayed and hunted by his brother, Nialo fought valiantly until his mother, Gaia, hid him away. Forced to live life as a jaguar, Nialo's found it easier to forget he was ever anything but an animal. One bite from a friendly vampire and Nialo begins to remember who he is and why he was hidden away. His anger and need for revenge are matched only by the desire he feels for the man constantly at his side. It is the touch of his mate that begins to soothe the savage beast.

Will Nialo be able to put retribution aside in the name of love, or will his anger and untapped power rip The Realm apart?

Reader Advisory: This is the final book in the Neo's Realm series. It is best if read as part of the series.

Spiro Manos stared at the large black jaguar asleep next to him. It had been four months since he’d learnt Nialo, the mate chosen for him by the Gods, was trapped inside the body of his brother’s pet, Sema. He reached out and ran his fingers through Sema’s thick fur. He couldn’t reconcile the fact that the black jaguar was his promised mate Nialo. At least while Nialo was still in cat form, it was easier for Spiro to think of the jaguar as Sema.

Sema lifted his head and yawned before moving closer to Spiro’s side.

Spiro smiled and waited for the big cat to drift back to sleep before allowing his emotions to rise to the surface. An entire realm of Blessed Creatures believed in his ability to heal them through wisdom and magic, but where were those powers when he needed them the most?

He felt Sema’s deep, rumbling purr against his chest, breaking his heart even more. As hard as it had been for him to live a life knowing he’d never have a chance to be with the one being meant for him, Nialo had been trapped inside an animal. What Spiro didn’t understand was how Sema had suffered for centuries in silence without becoming feral.

"Can you understand me?" he whispered.

Sema opened his eyes once again and raised enough to rub his head against Spiro’s chin. Was that a yes? Spiro wondered. A large part of him hoped Nialo could hear and understand what he said, but that would mean Nialo’s suffering over the centuries had been even greater.

Spiro sighed and rested his forehead against the jaguar. "I don’t know how you’ve done it for so long. Barely four months and I’m starting to feel off kilter. Should I speak to Sema or Nialo? Which one do you consider yourself?"

The jaguar moved to nuzzle Spiro’s groin through the blanket. It was an action Sema would have never attempted. "Shit!" Spiro shouted in surprise. "Enough of that." He gently nudged Sema’s head away from his cock. "Although, I guess, that answers my question."

Still rattled by the nuzzling and his body’s reaction, Spiro crawled out of bed. He turned his back to Sema and pulled on a pair of silk pyjama bottoms along with his matching robe to hide his hard cock. His entire adult life he’d slept in the nude, but perhaps he needed to rethink his choice of attire around Sema, at least until Ian Kildare, the King of the Vampires, had successfully completed his mission to kill Morwyn and reverse the spell Gaia had cast on Nialo.

Spiro groaned. Even the thought of seeing Nialo face to face was enough to harden his cock even further. He glanced over his shoulder. "Stay here," he ordered Sema before leaving the bedroom.

He made his way through the candlelit halls to the staircase. He took the stairs two at a time and within moments he was in the library and heading down the narrow passage. Once inside the vault, Spiro shut the door, something he rarely did, and went to the backroom where the portraits were safely stored.

He didn’t even need to think about which drawer he was interested in. Although the other drawers of paintings were filed chronologically, the one he was after had been organised by Neo with Spiro in mind. It was just one more reason he loved his brother.

Spiro opened the large, thin drawer and under the soft glow of the specialised lighting, he gazed at his favourite portrait of Nialo. It had been painted soon after Morwyn had taken a sword and separated himself from his conjoined twin, Nialo.

He retrieved a small stool from the end of the row of cabinets and carried it over to sit on. There had been days when a simple glimpse of Nialo’s likeness was enough to satisfy him, but not anymore. Spiro held his fingers over the aged canvas. He longed to touch the image of the handsome man with sorrowful eyes that stared up at him.

Although the depiction clearly showed a lot of Nialo’s muscular physique, it was the eyes that always held Spiro captive. Despite Nialo’s bronze-coloured skin and black hair, the eyes were the brightest blue he’d ever seen. Spiro had fallen in love with those eyes before his eighteenth birthday and his feelings had only grown stronger over the centuries.

Spiro jumped and spun around, nearly falling off the stool. "The vault’s door was shut for a reason."

Neo walked across the room and looked down at the painting. Hands in pockets, Neo shook his head. "I can’t believe you’re still doing this to yourself."

"Doing what, looking at the man I love?"

"He’s not a man, brother. That’s the one thing you always failed to understand," Neo began.

"I know what he is." Spiro stared down at the canvas. He couldn’t tell his brother he’d had dreams of being fucked by the perfect being in the portrait for so long he couldn’t reconcile Nialo’s God status.

Spiro glanced back up at Neo. "Did you need something?"

Neo moved to lean against the cabinet. "There’s something bugging me that I need to talk to you about."

"Okay." Spiro waited for his brother to continue. It was Neo’s obvious unease that made Spiro nervous. "What’s going on?"

Neo ran a hand through his hair. "Just something Zeus said in passing that’s been bugging me since."

Spiro stood and closed the drawer, shutting Nialo’s portrait away from the upcoming conversation. "What did he say?"

"It wasn’t what he came right out and said." Neo sighed. "You know how he is. He just mumbled something about convincing the Gods that Nialo deserved a mate in his memory."

Author Carol Lynne shares an incredibly vivid imagination with readers in this book.  Royal Blood triumphs with a rich blend of fantasy, drama and romance.  This world is fille...

Just as in the other books from this series, Royal Blood (Neo’s Realm) is well-written and pulls you into the pages to follow along the journey of the characters. The depth of emotion conveyed by Ms...

Share what you thought about Royal Blood and earn reward points.