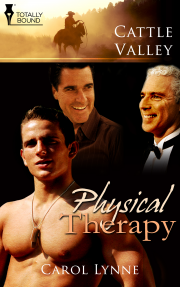 Book 5 in the Cattle Valley series

Doctors Sam Browning and Isaac Singer opened the Cattle Valley Medical Clinic when they were both fresh out of medical school. It was the best thing they ever did, other than loving each other for more than twenty-five years. They've enjoyed a thriving practice and an even better sex life, but lately routine has started to set in.

With the growth of the town, the doctors decide it's time for the clinic to hire a physical therapist. They thought hiring Matt Jeffries over the phone and offering him the use of their garage apartment was the smart thing to do. That is until Matt shows up, suitcases in hand. Three months after returning from the war in Iraq, Matt has bigger problems than his attraction to two gorgeous older men. Night sweats and flashbacks are keeping him locked in his own shell.

Can two doctors offer the physical therapist a little therapy of their own?

Opening his eyes, Matt sat straight up, a scream still resonating through the room. He rubbed his eyes as he tried to even out his breathing. It was always the same dream, different soldiers, same outcome.

Matt flung back the sweat drenched sheet and swung his legs over the side of the bed. He knew from experience there wouldn’t be any more sleep for him. After slipping on a pair of sweats and a T-shirt, he opened the door to his garage apartment, and stepped out onto the small landing.

The night was cool, cold actually, but it was just what he needed. He walked down the stairs to the little courtyard at the back of Isaac’s and Sam’s house and took a seat on the comfortable chaise.

Trying to push the dream from his mind, Matt focused his attention on his schedule for the coming day. Kyle was making great progress in his therapy, pushing himself harder in each session.

Who could blame the guy? Kyle’s desire was to walk down the aisle with his husband-to-be on his wedding day.

A sound from the open window above him drew Matt’s attention. There, silhouetted in the moonlight, stood Isaac. Damn. He’d been busted. It wasn’t the first time Isaac had caught him up and about in the middle of the night. At least this time he was wearing clothes.

A week after he’d started working for the Doctors Browning and Singer, he’d awakened after yet another nightmare. Seeking refuge in the garden, he hadn’t bothered putting on anything but a robe.

It had been a Saturday night, and his bosses had gone to Sheridan earlier in the evening to some kind of dinner party. They’d asked him to go, but he felt uncomfortable spending too much time with the couple. It wasn’t that he didn’t like them, it was just the opposite. His daydreams were filled with visions of the two of them in various states of undress.

Stretched out on the chaise, Matt tried to think of something, anything, to get his mind off the dream. That night, like now, he’d heard a noise coming from the perpetually open window above him.

What started as voices, talking too softly to be understood, quickly turned into moans of pleasure.

Closing his eyes, Matt had pretended he was in the room with them. His hand reaching down to untie his robe, he fisted his erection as the noises grew louder.

Matt’s available hand went automatically to his long neglected hole. He rimmed the tightly puckered skin with the pads of his fingers as the sounds of flesh meeting flesh echoed in the cool night.

Bringing his hands to his mouth, he spat on both of them. One returned to its place wrapped around his cock, the other smoothed the moisture onto his ass.

As he worked in two fingers, Matt jerked his cock faster, trying to keep up with the sounds coming from above. He was on the edge of bliss when he heard two voices cry out in ecstasy.

The howls of pleasure from the men upstairs, had his hands working at lightning speed. His fingers seeking out the void in himself that so desperately needed to be filled. His mind drifted and he could see himself sandwiched between the two doctors. His climax roared through him, painted his chest with his own seed. He hadn’t realised he’d cried out, but when his breathing returned to normal, he saw something that put a hitch in his breathing. Isaac stood above him at the window completely nude. Their eyes locked for what seemed like hours but was actually only a matter of seconds.

Suddenly embarrassed, Matt quickly closed the robe over his sticky chest and retreated back to his apartment above the garage. They’d never spoken of that night and Matt was eternally grateful. It was one thing to have fantasies about ones bosses, but it was completely different to beat off while listening to them fuck.

Shaking off the memory, Matt looked back up at the window. He heard Isaac say something over his shoulder before disappearing back into the darkness.

Turning his attention to the spring flowers visible in the moonlight, Matt tried to figure out what to do. He’d already put out feelers for another place to live. Kyle said he could rent the apartment above the bakery since he’d moved in with Gill, but Matt was holding out for a house. Of course, if things got much worse between himself and his present landlords, he might have to make the sacrifice.

Leaning his head back on the chaise, he couldn’t keep his eyes from glancing up once more. To his surprise, it was Sam who now stood looking down on him.

A noise from directly behind him had Matt out of the chair and dropping to the ground. He closed his eyes as he fought the images trying to swallow him whole. Visions of sniper fire and Danny’s death. Danny.

A cry rent the air around him. It wasn’t until comforting hands began rubbing his back, that Matt realised the cry had come from him. He looked up into Isaac’s concerned face.

“You okay?” Isaac asked, as Sam burst through the open French doors.

Matt closed his eyes and nodded. “I’m fine. You startled me.”

Isaac helped him sit back up on the chaise and took a seat beside him. “Need to talk about it?” Isaac asked.

“No,” Matt answered. “Just one of the many presents I brought home from the war.”

God help him, but it took every ounce of self preservation not to lean into Isaac and accept the comfort the man was obviously willing to provide.

He couldn’t help but notice the look the two doctors exchanged. Matt hadn’t officially been diagnosed with PTSD (Post-Traumatic Stress Disorder), but that was only because he’d refused to see a doctor. Funny, he was now faced with two. Two doctors who were both looking at him with pity in their eyes.

One of the best in the series, this book deals with contemporary issues and the struggles of real people. I laughed, I cried, and I felt fulfilled be the end. A great read.

This like the rest was an awesome read... I think that Everyone should sit down and read the whole set. I have yet to be disappointed PLEASE PLEASE keep up the good work...reading Books from this site...

Share what you thought about Physical Therapy and earn reward points.