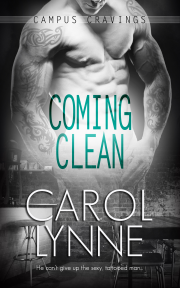 Book 18 in the Campus Cravings series

Trapped by words spoken as a teenager, Chase Hughes longs for a love that touches not only his heart but also his body.

First loves are often the hardest to leave behind. For months, college student Chase Hughes has known he owes his high school sweetheart the truth about his feelings. He still loves Benny, but he has grown to realise he’s ready to move on. The problem is, he knows Benny will be crushed by the breakup, and hurting the sweetest man he’s ever known weighs on Chase’s soul.

While working as a server at Clean Slate, Chase meets the man of his fantasies. Mac Evans pushes all of Chase’s sexual buttons, and after having uninspiring sex with Benny for two years, Chase is ready to explore more than the tattoos on Mac’s muscular body.

Mac gave up everything to come clean with the people he loved, and expects nothing less from Chase before allowing things to progress between them. Chase is forced to choose between hurting the man of his past and giving up a sexy, tattooed man that may be his future.

Chase Hughes stared at the large flat-screen television in the BK House rec room without seeing a damn thing. The phone in his hand dropped to the sofa cushion beside him. He needed to get off the couch and jump into the shower before work, but he couldn’t get the conversation with Benny, his boyfriend of two years, off his mind.

It wasn’t that the phone call had been bad. He never had a problem talking to Benny because they knew each other so well they never ran out of things to say. Nope, it was the way Benny ended their daily calls with an ‘I love you’ that made him feel like shit.

Benny Allenbrand was one of the nicest guys Chase had ever known, and there had been a time when the two were inseparable, but that had been before Chase had gone off to college. Being two and a half years younger, Benny wouldn’t graduate high school until May.

Chase glanced at the phone. Benny had accepted a scholarship to play football for North Central Idaho University. The same football team Chase played on. It had always been their plan for Benny to graduate and join Chase, so what the fuck was wrong with him now that their dream was going to come true?

Wyatt came into the room, twirling a set of keys on his finger. “Do you still need a ride to work?”

Chase glanced at the clock. Fuck. So much for getting a shower in. He got to his feet and stretched his arms over his head. “Do I have time to change?”

“Sure. I thought I’d grab something to eat from the kitchen before I left anyway. Meet you back here in fifteen?”

“Great.” Chase picked up his phone. He should have enough time for a quick shower. It was his first night back to work since he’d returned from winter break and he couldn’t wait to get some money in his pocket again. He’d only worked at Clean Slate since he’d turned twenty-one in November and couldn’t believe the bar’s owner, Reid, had given him time off to go home for Christmas.

It only took Chase a moment to race to his room and grab a towel and his shower bucket. He stripped out of his clothes and stepped under the hot spray of water. When he’d first taken the job at Clean Slate, he’d made piss poor tips until Wyatt and Zeke had clued him in on what to wear and how to flirt. He still wasn’t as good as Wyatt and Zeke at the flirting, but he’d spent his entire first week’s pay on clothes that he wouldn’t be caught dead in back home in Cattle Valley.

After a quick scrub, Chase spent a couple of minutes getting his blond hair styled. He preferred the just out of bed look and obviously, so did the bar patrons, because the less time he spent on it, the higher the tips.

Chase pulled on his low-rise jeans and tight white T-shirt with the bar’s logo. Wyatt had told Chase he’d make even more money in tips if he got his nipples pierced, but he wasn’t willing to go that far. He was the smallest quarterback in the college’s history and was already pushing his luck with the football team. Showing up for spring training with pierced nipples would likely get him jumped in the showers.

Fully dressed, Chase stopped by his room to toss the towel toward his bed and retrieve his wallet. “I’m going to work,” he told his roommate.

Rusty glanced up from the book he was reading. His parents had died in an accident less than six months earlier, so Rusty had stayed at BK for the holidays. Chase couldn’t imagine how shitty that would be.

“Okay,” Rusty replied before going back to his book.

As Chase jogged down the steps, he prayed he wasn’t the only student who’d come back from break early. A packed bar was a lucrative shift.

“This place is dead,” Skeet Drews declared, entering the garage through the tiny showroom.

Mac glanced up from the custom bike he was working on. “Not many people are out looking for Harleys when there’s a foot of snow on the ground.”

“So why’re you even open? Knock off early and let’s grab a drink.” Skeet plopped down on one of the small metal stools Mac had sprinkled around the three bay garage.

Mac didn’t dare tell his best friend that being alone at the shop was a hell of a lot easier than being alone at home. He’d made the mistake of letting Skeet talk him into going to Clean Slate a few months earlier, and Skeet hadn’t shut up about going back since. “That place is too loud.”

“Fuck, when did you become an old man?” Skeet tapped a booted foot against Mac’s workbench.

“When I became responsible for a wife and son at the age of eighteen, asshole.” Mac returned his attention to the gas tank he’d been grinding on.

“Who said anything about getting drunk? I figured we’d have a couple beers, a big plate of chili cheese fries and maybe get lucky.”

Chase's story I've been waiting for this one. I loved it... Chase and Mac are great together. I always thought Bobby was to young for Chase and just not right for him. In this book we watch Chase grow...

If you like stories about complicated relationship situations, if you want to read about two men who both have to learn how to be honest and deal with the consequences, and if you’re looking for a read...

Share what you thought about Coming Clean and earn reward points.