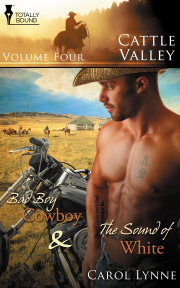 Book 37 in the Cattle Valley series

Love comes in all shapes and sizes and always when you least expect it.

Bad Boy Cowboy: When Logan Miller pulls up to the EZ Does-It ranch atop a gleaming black Harley, bearing tattoos and killer green eyes, Jax Brolin knows he's in trouble. How can this be the same skinny kid who used to play with his baby brother?

Until Logan reunited with his best friend's big brother, he'd thought the best thing to have between his legs was a motorcycle, followed closely by a horse.

The town may classify Logan as a bad boy, but all he wants is to be is a good man for Jax and he'll do anything to get the man's attention.

The Sound of White: Finally healed after a beating that almost took his life, the last thing Richard Johnson needs is to be attracted to Chad Neal. Despite his smaller stature, Chad Neal needs to be in charge, both in the bedroom and out.

Collin Zeffer, longs for the kind of relationship he sees his friends have, but who would want someone as boring as him? Hiding his face from the world, Abe Cross is content to live out his life alone.

When an unexpected blizzard blankets Cattle Valley, the lives of these four men will change forever.

5 out of 5! Ms. Lynne has created a story that is an action-packed mystery that fulfills everyone's desire for holiday spirit with a little bit of heat thrown in.

Share what you thought about Cattle Valley: Vol 4 PRINT and earn reward points.