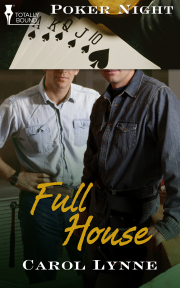 Book 5 in the Poker Night series

Life hasn't been easy for Marco De Le Santo. He's spent the last eight years raising his young brothers and sister. At the age of twenty-four, Marco finally has the chance to explore his feelings for Kent Baker, his boss. He knows Kent thinks he's a playboy, but Marco's finally ready to tell his friend the truth about his secret life. What would Kent say if he knew Marco came with three kids under the age of eighteen?

Kent Baker has watched Marco since the day he stepped into his office. As owner of a construction company, Kent has seen his share of good-looking men, but none of them hold a candle to Marco. Kent has waited years for Marco to grow up and realise there's more to life than partying and random men, but with each year passing year, he becomes bitter.

When Marco finally opens up to Kent, will his boss be angry at the deception or can they build a future that includes Marco's, already, Full House?

Tired and dirty, Marco parked his pickup in the driveway of the small two bedroom house. He grabbed the cooler on the seat beside him and headed inside after a long day of work.

What he’d hoped would be a relaxing night shattered as soon as he heard the arguing. “Shit.”

It seemed his brothers were always fighting lately. He unlocked the door and stepped into the living room. Nicky was pinned to the floor by Bruno, his much bigger brother. The two of them were cussing and screaming at each other.

His brothers were too busy yelling to even hear him. The feuding siblings took a back seat momentarily in Marco’s mind as he strode through to Maria’s bedroom and opened the door. He didn’t immediately see his baby sister until he opened the small closet.

Maria sat on the floor, her arms wrapped around her legs.

“Come here, baby girl.” He reached down and pulled Maria up and into his arms. “It’s okay. It’s just what brothers do. I’ll take care of it.”

“Dad called,” Maria informed him. She buried her face against Marco’s neck.

Marco hugged his sister. “Is that what Bruno and Nicky are arguing about?”

Marco carried the frightened girl over to her small twin-size bed. “I’ll go find out what’s going on, and then I’ll start dinner. Hamburgers on the grill sound okay?”

Maria nodded, again. She reached out and grabbed a pink stuffed bear that was starting to fall apart.

With a kiss to Maria’s forehead, Marco went back out to the living room just in time to see Nicky throw a punch. Although Nicky’s fist didn’t land squarely, it did manage to clip Bruno’s jaw.

“Break it up!” Marco screamed, lurching for his brothers.

He wrapped his arm around Bruno’s neck and pulled him off his younger brother. “Stop it.” He pointed a finger at Nicky. “Throw another punch, and you’ll be sorry.”

Although Marco wasn’t big, years of laying brick had given him enough upper-body strength to intimidate both his brothers. They broke apart, but continued yelling at each other.

“He’s our Dad and he misses us,” Nicky countered.

Marco held up his hands. “Shut up!”

His brothers quieted, but continued to give each other dirty looks.

“Now, when and why did Dad call?” Marco asked. They hadn’t seen Eddy De La Santo since he’d stolen the money Marco had set aside to put a new roof on the house.

“About an hour ago. He said he was in town and wanted to come over,” Nicky explained.

“In town? Where the hell’s he been?” Marco knew no good would come from letting his father visit.

“In Santa Clarita with some woman.” Bruno stood and crossed his arms over his chest. At seventeen, Bruno was the biggest of the De La Santo’s and often used his size to intimidate his fifteen-year-old brother.

Marco took off his T-shirt and wiped the sweat from his face and under arms. He didn’t want to refuse Nicky a visit with their father, but he wasn’t comfortable having Eddy in the house. “Why don’t you call him back and tell him you’ll meet him at a restaurant, my treat.”

Marco turned to Bruno. “If you don’t want to see Dad, you don’t have to. I’ll go tell Maria the same thing.”

Bruno nodded and Marco left the room. He knocked on Maria’s door before entering. “Feeling better?”

Maria nodded. “Why do they have to fight all the time?”

Marco began picking up dirty clothes and stuffing them into the hamper. “They’re teenage boys. It’s to be expected. Please don’t let them upset you.”

“But what if one of them gets so mad they leave?”

He walked over to sit on the side of the bed and put his arm around his baby sister. “I know things haven’t been easy, but just because Mom and Dad left, doesn’t mean your brothers will too. I mean, they’ll leave at some point, but that’s what adults are supposed to do. Bruno will be eighteen next April. I can’t make him stay here after that. Men of that age want their freedom.”

I didn’t have a choice. Marco bit his bottom lip. “How could I possibly leave you three? I love you.”

Maria hugged Marco around the waist. “I love you, too.”

He kissed the top of his sister’s hair. “Nicky’s going to dinner with Eddy. Do you want to go?”

Marco didn’t blame her. All she knew of their father was drunken days and nights. “Okay. I’ll go fire up the grill.”

Walking back through the living room, Marco addressed Nicky. “Did you feed Rufus?”

Nicky shook his head but didn’t take his eyes off the television.

“Well, get up and do it.” Marco sighed. He was so tired. He knew the time had come for some rule changes. There was no reason the kids couldn’t help him out. Dinner should already be on the table by the time he got home. He’d tried to talk to his brothers about it before, but they’d played off his requests and nothing had changed.

He opened the fridge and took out a package of hamburger. It was starting to look a little brown so he made sure to smell it after opening the plastic. It was close, but Marco thought they’d be okay if they ate it. He’d have to make sure the burgers were cooked well instead of medium the way his family preferred them.

After making up seven patties, Marco grabbed the plate along with the salt and pepper shakers and headed out back. As soon as he pushed open the screen door, Rufus barrelled into him, trying to get at the platter of meat.

While trying to save their dinner, Marco was thrown off balance and fell over the top of the large German Shepherd.

“Fuck!” he screamed as his knee hyper-extended. He collapsed on the ground as Rufus dove for the meat. His hands balled into a fist as he tried his best not to pass out. From the way Rufus was eating, Marco wondered if the dog had been fed at all that day.

The back door opened and Nicky came to stand over Marco, bowl of dog food in his hands. “Shit. What happened?”

Marco narrowed his eyes at the fifteen-year-old. “Your dog knocked me over to get to something to eat. Now I’ve not only lost dinner, but I’ve fucked up my knee.”

This is definitely my favorite of the entire series and I'm sad to see it end...Praise goes to Carol Lynne for creating yet another group of characters that stick with a reader and worm their way into...

This is the one story I have been waiting for since the Poker Night series began...What a wonderful story to end a great series on.

Share what you thought about Full House and earn reward points.