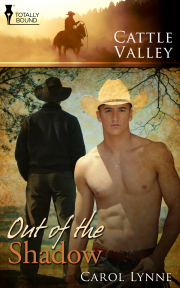 Out of the Shadow

Book 6 in the Cattle Valley series

When Shepard Black left the rodeo circuit, he thought his days of lusting after young cowboys were over. Now owner of the Backbreaker Ranch, Shep raises mean spirited bulls like the ones that used to toss him around the arena. It's a challenge, but he never imagined his best friend's son, Jeremy, would prove to be his toughest one yet. Watching Jeremy's long legs wrap around a bucking bull gives Shep too many ideas for comfort. Even worse, Jeremy seems to know exactly the affect he's having on his boss and teacher.

When Jeremy asks Shep to help him train for the upcoming Cattle Valley Rodeo Days, he has two goals in mind. To spend time with the man he's lusted after since he was a teenager and to beat his father. He's been through hell as the son of the reigning National Champion, and he wants his dad to have a taste of his own medicine. He might just get a taste of what he's longed for all this time, too.

Shep looked over the top of his tiny reading glasses. He’d been trying to figure out where he’d screwed up the books, and damned if he could find it. “You’ve got a list together already?”

Rance grinned and tilted the white straw hat up higher on his forehead. “It’s the beginning of June. We barely have a month before the rodeo.” Shep looked down at his desk calendar. “Damn. Where the hell has the time gone?” He took the list from Rance and glanced over it. “Looks good. You sure about Tabasco Red?”

“He’ll be ready. Jeremy’s been working with him.”

“Jeremy?” Shep stood and put his hands on his hips. “You trying to get me sued? That boy’ll fall off and break his damn neck.” An image of the lean dark haired boy lying on the ground twisted and broken, caused an ache in his gut.

Rance chuckled and shook his head. “You haven’t been paying enough attention lately. Jeremy is the best bull rider we’ve got.”

Shep narrowed his eyes and gave a mock growl.

“Well, except for you that is.” Rance quickly amended with a cheeky grin. “He’s not a boy anymore either. Why he’s working here instead of out on the circuit I’ll never understand. You’d think with his connections he could write his own ticket on the pro tour.”

Shep sat back down and handed the list to Rance. “He has his reasons I’m sure. The list looks fine.”

Rance nodded and started to walk out of Shep’s home office. “Rance,” he called after the cowboy.

“Thanks,” Rance said and continued out the door.

After his foreman left, Shep tried to go back to his books, but thoughts of Jeremy kept filtering through his mind. He’d always thought Jeremy chose to live at the Back Breaker because of his sexual orientation. Life must be hard enough being the son of the reigning world champion. To be the gay son of the same man would be intolerable out on the Professional Bull Riders circuit. Shep knew what it was like. He’d lived the life for years, always afraid he’d misstep and out himself.

He took off his glasses and tossed them to the old scarred desk. He was forced into retirement once Devil’s Due had tossed and then trampled him. Building the ranch seemed like the logical thing to do at the time. Shep chuckled to himself. I thought my lonely days were over.

Shaking his head, he reached for his glasses once more. He’d loved to look at the young slim cowboys on the tour. It was his hope that being the boss of his own ranch would make him feel like a kid in a candy store. And he had been that kid, for a couple of years at least. He’d discreetly indulged himself in the bow legged men as they filtered in and out of his employment. Until...

“Boss!” Rance shouted, running back into his office. “I think you should come out here.”

Shep stood and was already on his way out the door before he’d even given Rance a chance to tell him what was wrong. In this business, seconds mattered. A slow response time could mean the difference between life and death. “What’s up?” he asked, opening the front door.

“When I left your office, I noticed Jeremy’s truck parked out back. I went to the bunkhouse to see how his trip up to see his dad went and found him in bed.” Rance reached out and grabbed Shep’s arm, pulling him to a stop.

“He’s been beat up, Boss.” Rance motioned to his face. “He’s holding a bloodied rag over his cheek. I think we might need to get him to town.”

“Shit,” Shep spat out and raced towards the bunkhouse. His chest tightened as he threw open the door to the room Jeremy shared with the new hired hand, Bo.

Luckily, Bo was out in the hayfield. It would’ve been hard for the kind-hearted man not to try and help had he been present.

He stepped into the room and went immediately to one knee beside Jeremy’s bunk. Rance was a little off in his assessment of Jeremy. He hadn’t been beaten, merely hit once it appeared. The left side of Jeremy’s sweet face was bruised and swollen from what he could see under the bloody rag. “Let me see it,” Shep commanded as he reached for the cloth.

“I’m fine,” Jeremy mumbled. “Just opened my mouth when I shouldn’t have.”

“I’ll be the judge as to whether or not you’re fine,” Shep said. He covered Jeremy’s long fingered hand with his own and forcibly lifted the rag from his face. The cut was still open and about an inch and a half long, but because it was on his cheekbone, Shep knew it needed stitches.

5 out of 5! I am a huge fan of Carol Lynne and her delicious series of homoerotic books... While the relationship and sometimes the dialogue are unrealistic, I find I can't bring myself to...

Overall this was a nice pleasant read with minimal angsting that was a good way to spend a little bit of my afternoon. Filled with cowboys in a familiar setting, anyone who has enjoyed this series so fa...

Share what you thought about Out of the Shadow and earn reward points.