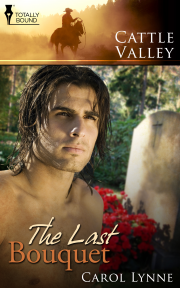 Book 10 in the Cattle Valley series

Tyler Manning hates seeing Hearn Sutherland mourn over a jerk like Mitch Lanham. Every week Hearn comes into Tyler's shop to pick up fresh flowers for his lover's grave, and every minute spent with the good-looking man makes Tyler love him more.

Since Mitch's death, Hearn has become withdrawn and sullen. For months before Mitch's accident, Hearn tried to fight the attraction he felt for his best friend, Tyler. Now nine months later, he learns the truth about his long-term partner, one that will change Hearn's life forever.

When Tyler convinces Hearn to run for mayor against Cattle Valley's own favourite son, Nate Gills, Hearn knows he's in for a bumpy ride.

Nate has his own bumps in the road to overcome. With the threat of a long-time secret being exposed, Nate must finally come to terms with his past. Opening himself to criticism from his partners, Ryan and Rio, isn't going to be easy, but Nate knows the time has come to confess his past sins.

With Puccini blaring in the background, Tyler Manning stared at the heart in his hands. Unlike most floral shops, Tyler had waited until the first week in February to decorate the front windows of his store for Valentine’s Day.

The homemade decoration wasn’t fancy, red velvet glued front and back to a big piece of cardboard. He’d found the most exquisite lace in Sheridan and had applied it around the perimeter of the four-foot heart.

Feeling the sudden urge to rip the heart down the middle, Tyler set it aside. Maybe decorating with a broken heart wasn’t such a good idea. Visions of Hearn came to mind. Tyler gazed at the refrigerated case holding the weekly bouquet he made for Mitch’s grave.

How had he managed to fall in love with a man who was already taken? “Fuck!” he yelled, kicking the heart at his feet.

Sinking to the floor, Tyler buried his face in his hands. Crying had become a regular habit lately. Since the accident that had killed Hearn’s partner, Mitch, his friend had barely given him the time of day. If it weren’t for the standing order of a bouquet of flowers, Tyler doubted he’d see Hearn at all. Why? It still didn’t make sense to him.

Before the wreck, he and Hearn had become almost inseparable. Then Mitch had been killed and...nothing. At first Tyler worried that Hearn had picked up on his more than friendly feelings, but he no longer thought that was the case. It wasn’t just Tyler that was being given the cold shoulder. Hearn had withdrawn so deep into himself and his charity work in Sheridan that no one ever saw him.

Tyler gazed up into the same brown eyes he saw in his dreams every night. The concerned expression on Hearn’s face as he knelt beside him melted Tyler right then and there. “Are you okay?” Hearn asked over the loud music.

Feeling like an ass, Tyler nodded and wiped the tears from his face. “Yeah. Sorry.” He stood and walked behind the counter to reduce the volume on La Boheme. Taking a deep breath, he turned to find Hearn standing right behind him.

Knowing he couldn’t out and out lie to the man he loved, Tyler gestured around the shop. “Valentine’s Day.” He shrugged. “Depresses me every year.”

The corner of Hearn’s mouth rose slightly. “Kinda in the wrong business then aren’t you?”

Unable to resist that sexy grin he enjoyed so much, Tyler smiled. “Yeah. I guess you’re right.”

Hearn put both hands on Tyler’s shoulders and squeezed. “You’ll find someone.”

“I already have,” Tyler admitted.

A look of dark emotions passed momentarily over Hearn’s face before disappearing. “That’s good, Ty, real good.” Hearn released his hold on Tyler. “But if you’re still feeling down enough to cry maybe this guy isn’t the one for you.”

“He is. He just doesn’t know it yet.” Tyler broke eye contact and walked towards the refrigerator. “Your flowers are ready,” he announced, pulling out the large daisy and rose bouquet.

Hearn took the flowers, and just like he did every week, put them to his nose and inhaled. It was the moment Tyler both loved and hated every time. For that brief few seconds, all Hearn’s problems seemed to melt into the background, leaving the gentle peaceful man Tyler had come to love.

“Of course,” Tyler agreed. Trying to buy himself a few more moments in Hearn’s company, Tyler scrambled for something to say. “Have you heard about Quade?”

Hearn stopped on his way to the door and turned. “No. Did something happen?”

“I’ll say. He quit. It was announced earlier. I guess my cousin George is taking over for him until a special election is held.”

Hearn whistled. “Wow. Why the hell didn’t I see that one coming?”

“No one did. Quade decided to move to Oahu to be with that guy, Kai, he met last year.” Tyler shifted from foot to foot. “I was thinking. Maybe this would be a good opportunity for you.”

“Well, you’re always complaining the city doesn’t have enough activities to keep the kids busy during the summer months. Maybe this is your chance to do something about it?”

“I don’t know the first thing about running a town.” Hearn took several steps to stand on the opposite side of the counter from Tyler.

“You do so,” Tyler disagreed. “You have a business degree. You run the entire park system like a well-oiled machine. You can do this,” he implored, reaching out to grab Hearn’s hand.

“I can’t. Scheduling the sports fields and making sure the gazebos are cleaned isn’t the same thing as running an entire town,” Hearn said, shaking his head.

Tyler focused on the dark brown locks of hair as they fell back into place. Hearn had let his hair grow. He didn’t know if it was by choice, or lack of caring, but Hearn’s hair reached just past his shoulders to fall in a shaggy cascade.

“It makes me feel good to know you believe in me, but I’m honestly not qualified.” Hearn pulled his hand out of Tyler’s grip and held up the flowers. “I’ll see you in a week.”

Tyler watched Hearn walk out the door and pounded his fist against the counter. “Dammit!” Why couldn’t Hearn see in himself what Tyler saw? The answer came to him with a bitter taste. “Mitch.” The asshole who’d berated Hearn over and over for wasting his college education being a glorified groundskeeper. Why couldn’t Hearn see that he’d been so much more than that to Cattle Valley?

Pushing away from the counter, Tyler turned the music back up and went back to work on his display. He’d figure out a way to undo all the years of damage living with Mitch had done to Hearn.

Another great Cattle Valley series entry for Carol Lynne. I like the way she has been combining stories in the last three books, giving more of the residents some air time. In The Last Bouquet, we finally...

OMG Carol! You have again out-done yourself I cant wait for more. Rio In a red boa PERFECT! I dont know were to start... The book was Outstanding and I cant wait for the next one...at this rate they...

Share what you thought about The Last Bouquet and earn reward points.