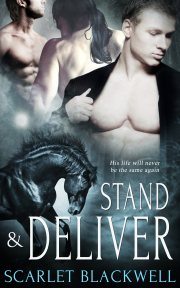 When Lucien Mayer is held captive by dangerous but seductive highwaymen, does he escape, or does he give in to his heart’s desire?

Lucien, Earl of Ravensberry, has the looks, the title, the house and all the money in the world. What he’s lacking in his humdrum life of loneliness is someone to warm his sheets at night. When he’s kidnapped by five highwaymen one night, things start looking up. This is the most exciting thing to happen to him in forever.

But Lucien’s life is in danger. Dante, the tough, self-appointed leader of the band, doesn’t have a lot of time for captives and vows to kill him—after he’s used Lucien’s body as he desires. Then there’s Ambrosius, Dante’s best friend, a damaged, reclusive individual who appeals to Lucien from the outset. The feeling is mutual, and Lucien is soon braving a whirlwind of emotions. He had never thought to fall for an outlaw, and he is torn between escaping and satisfying the needs of his heart. All he knows is, life will never be the same again…

Publisher's Note: This book has previously been published under the same title. It has been expanded for re-release with Pride Publishing.

Lucien Mayer, fourteenth Earl of Ravensberry, pulled the blanket a little higher on his knees and leaned back against the leather seat, absently staring out of the window at the ink black sky littered with stars. The London-Nottingham road made for treacherous going, rutted with holes, every jolt sloshing the liquor around in his stomach.

The night had been satisfying enough. He had left the card game at Lord Blackstone’s estate more than a little drunk and with a thousand pounds in his purse. It was a shame that he despised the lord and most of his cohorts.

Lucien lived a fruitless existence alone in his mansion with his servants, squandering his inheritance on drinking and cards. He had come into this on his twenty-first birthday after the deaths of his parents, shot and killed by highwaymen on this very stretch of road. He had been alone in the world for eight long years and he doubted that would ever change.

The thunderous beat of what sounded like many hooves shattered his drunken introspection. He lowered the coach window and stuck his head out, curious as to the commotion. He wished he hadn’t when he saw four black horses charging after his coach like bats out of hell, all their riders with scarves pulled up over their faces, the man in front brandishing a pistol.

“Faster, Stephen!” Lucien yelled, rapping on the roof with his cane. Although he had never been robbed, he lived in mortal terror of just this event happening, not least because of what had happened to his parents. This stretch of road had recently become notorious with a gang of highwaymen known as The Dark Knights, who robbed and killed with zeal. Lucien knew his luck had run out.

The horses’ hooves became deafeningly loud. Lucien saw one of the beasts overtake his coach to ride neck and neck with his own horses, the rider barking out an instruction to his coachman.

An instant later, the coachman reined in the horses and the coach came to a shuddering halt, almost throwing Lucien from his seat. An icy terror enveloped his heart as a shadow fell across him. He slowly looked up.

There was a face at the window, ghostly white by the light of the carriage’s lamps, under a tricorn hat and a black scarf. Only the eyes showed, a startling dark, emerald green with thick, sooty lashes.

A disembodied hand thrust a pistol rudely through the open window, hard into Lucien’s chest, right over his heart.

“Stand and deliver,” drawled a deep, sardonic voice, the accent southern. “Your money or your life.”

Lucien drew in his breath in horror. Staring into the cold, unblinking eyes, he found himself thinking that his life was worth little enough anyway. Why should he roll over and die at the hands of these bandits?

“I haven’t got anything,” he said, his voice less steady than he would have liked.

The eyes gleamed with amusement and Lucien could have sworn the bastard smiled. “The crest on your coach says differently, my lord,” he said, voice edged with steel. “Hand me your purse if you value your life. It’s cold tonight and my companions are anxious to be away to their beds.”

Lucien’s eyes flickered behind the highwayman to the two indistinct faces of the other villains, the third just at the edge of his view, pistol trained on his coachman.

When the silence dragged on, the man at the front of the coach barked, “Do as he says. Don’t be a stupid boy.”

Lucien clenched his fist in fury. “Do you know who I am?” he demanded, surveying the four men haughtily. “I’m not a boy! How dare you address me this way?”

The highwayman at the window laughed softly. “All right,” he said. “I’ve had enough. One more time. Give me your purse or you die. Boy.” The pistol jabbed farther into his chest. The hammer was cocked back.

Lucien stared into the green eyes. Suddenly there was a swift movement from the front of the coach. The man who had been taking charge of the driver nosed his horse in next to the green-eyed highwayman’s. He reached in through the window so his face was close to Lucien’s, his eyes fixed on Lucien’s, black as the darkness, and slid his hand inside Lucien’s frockcoat, into the pocket at his breast where he kept his purse, his hand ice-cold even through the thick linen of Lucien’s shirt.

He withdrew the purse with no protest from Lucien, who was too frightened to move, and slipped it into a saddlebag on the side of his horse.

“Let’s go,” he said dismissively, turning his horse’s head around, casting a look back at Lucien.

The green-eyed man stared a little while longer at Lucien. “Tell me why I shouldn’t put a bullet into your head anyway, you spoilt brat?” he hissed into Lucien’s face, jabbing him with the pistol.

“Leave it,” called his co-conspirator, the one who had robbed him. “Let’s go.” Although the green-eyed man appeared to be the leader, the dark-eyed one obviously had some influence over him, because his tormentor drew away from the window now.

It’s on the historical side. The year isn’t mentioned but through description I gather it’s maybe late 1800’s. Lucien is kidnapped one evening by 4 highwaymen. Dante, the leader of the gang,...

Lucius' conflict almost tears him apart, and I was glued to the pages as he battled his conscience, his heart, and Ambrosius’s needs for revenge all at the same time.
If you like storie...

Share what you thought about Stand and Deliver and earn reward points.