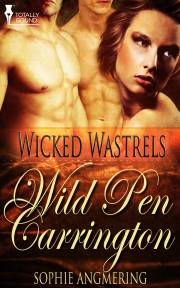 Book 1 in the Wicked Wastrels series

Penelope Carrington has a reputation for being wild. Now she's about to have the opportunity to be wicked…

Mrs Penelope Carrington, widow of the late Mark Carrington, has been banished to the family estates by her high-handed brothe-in-law Sebastian. He has instructed her that she will have to contemplate her reprehensible behaviour and apparently mend her ways before she is allowed to return to London Society. But Pen Carrington has other ideas, and sets off back to London in disguise.

A woman in love with a man she cannot have, Pen deliberately disobeys Sebastian Carrington only to cross the path of Lord Julian St John Arden. A man with a taste for a wager and, it would seem, Pen…

The sun was finally attempting to break through the humid midday cloud when Hugo Burrows decided to stop travelling for a bite to eat. His mood seemed to have eased, and a somewhat chastened Mrs Penelope Carrington gratefully seized on the tankard of ale, and bread and cheese, that he’d sent out of the taproom for her.

Hugo was very, very angry at her for blackmailing him into returning her to London. Pen could not resist an impish smile at the memory of his face when he had discovered her sitting in his curricle armed with a bundle of rather indiscreet letters to her Russian friend, Countess Griaznova. Pen was determined to escape her enforced rustication by returning to London with her old friend and hisis current courtship of a rather plain heiress was too fragile an undertaking for him to risk Pen making the contents public.

Pen Carrington was here because she was making a hasty escape from the home of her brother-in-law Sebastian Carrington. He had collected her from London not a week go, after it had been brought to his attention that the widow of his brother Mark had managed to set the tabbies of the ton by the ears once more by taking part in a carriage race through St James’.

It would appear that this had been the final straw.

As the head of the family, Sebastian took a very dim view of any behaviour that reflected badly on the Carrington name.

Furious, he had simply turned up during her morning ‘At Home’ and had removed her from her comfortable house in Half Moon Street without so much as a ‘by your leave’, and on the way out had informed her that her beautiful phaeton was to be sold!

Sebastian was as handsome as hell, but capable of totally ignoring her womanly wiles. And by God, she had tried both sweet persuasion and spoilt tantrums to get the freedom she wanted, and all he had done was stare down his nose at her as if she was a troublesome child.

He had done precisely that after explaining in icy tones why he was forcing her to ‘rusticate in Sussex’, where she was to ‘contemplate her reprehensible behaviour’ and ‘mend her ways’ before she was allowed to return to London.

As Pen sat there, debating whether he should jump down from the carriage and revive her sleeping limbs, a curricle pulled by a team of four chestnuts swept into the yard, scattering dogs and fowl as it went.

The four-in-hand shuddered to an elegantly controlled halt, with a cry from a smartly liveried tiger to the incumbent ostlers to“Get t’er it”

The man at the reins of this impressive team looked about him with the air of an individual who missed nothing.

He was obviously a serious man of fashion, with a beaver hat set over dark locks, carefully brushed into a semblance of disorder, and tousled further by the activity of handling the reins of the four horses. His cravat of starched muslin rested neatly under his chin in an immaculate series of folds; his driving coat of drab cloth bore twelve capes and a double row of magnificent buttons, silver, not fastened, obviously due to the oppressively warm summer weather. Pen had to admit that this gentleman was a handsome creature. But his striking looks were marred by a decided air of self-consequence; his eyes surveying the inn yard with a sharp ironic gaze, at odds with the weary lids that shielded them. They were matched with a beautiful nose, as straight in its line as his mouth, which was set firm, and, worse than that, when he spied her sitting in Hugo’s curricle, Pen could almost swear that the corner of his lips lifted in a sneer.

Share what you thought about Wild Pen Carrington and earn reward points.