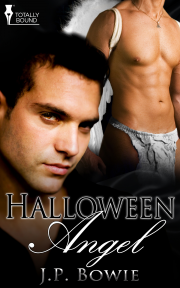 When Eddie Gillespie, recovering from an abusive relationship, meets a handsome stranger, Joshua Reynolds, in a local bar, an instant attraction flares between them. There's just one problem—no one else in the bar remembers Eddie being with Joshua.

Invited to a Halloween party by Hollywood's sexiest male star, Sam Peterson, Eddie arrives dressed as an angel, and is both startled and delighted to meet Joshua again. Their moment together is shattered by Sam who tells Eddie that he and Joshua are estranged brothers, and that Joshua is a dangerous liar who will only use and hurt Eddie. But Eddie is already captivated by Joshua's allure and the two leave the party together.

After a night of love and passion, a revelation from Joshua makes it seem as though Sam was right. Eddie can't believe his bad luck. To run from the threats of an abusive boyfriend into the arms of a vampire — could things get much worse?

Well, yes they could—but perhaps with the help of Cassandra, a good witch, Eddie's bad luck can be transformed into an experience that will change his life forever—and for the better.

Eddie Gillespie raised his head slowly from his pillow and blinked at the sunlight that was beginning to filter through the bedroom window blinds. Gingerly, he put his fingertips to the side of his face, feeling the puffiness there. He knew, without getting up to look in the mirror, that he was going to have one helluva bruise under his right eye.

Idiot, he thought. Why had he let that moron back into his life after all the shit he’d put up with before?

“You are such a sucker, Eddie,” he muttered, struggling out of his bed. He trudged through to the bathroom, flicking on the light so he could peer at his reflection. It was even worse than he had imagined. His cheekbone under his right eye was contused and discoloured, the white of his eye was a bloody red, and his bottom lip was torn and split in two places.

“Jesus...” His eyes filled with tears as he stared at himself. “Bob, you bastard...why?” Only last night, against his better judgement, he’d agreed to meet his ex at the Blue Moon bar on Santa Monica. He’d been worn down by Bob’s constant whining on the phone about how much he missed their time together, and how he’d really changed, and how fuckin’ sorry he was for all the things he’d done and blah, blah, blah... And Eddie had fallen for it.

“Idiot!” he yelled at his reflection in the mirror. “You stupid idiot!” Because of course he knew Bob hadn’t changed. He couldn’t change—he was rotten through and through. A narcissist with a cruel and mean streak he could not control—especially after a couple of drinks.

Eddie shuddered as he remembered the look on Bob’s face when he’d refused to have him back at his apartment. That cold look of anger had so quickly morphed into an uncontrollable rage then the slapping had begun. It wasn’t as if Eddie couldn’t defend himself. He could. He wasn’t a big man, but he worked out regularly, and at five nine and one-hundred-and-sixty pounds, he was slender but sleekly muscled and strong. He just wasn’t a violent man. The thought of hurting someone made him wince. He had never been able to understand why anyone would want to beat up on another person—especially someone they purported to like—love even.

Well, that was the end of it. He would never allow Bob to get close enough to punch him in the face again. Any phone calls or emails would be ignored. He’d be damned if he was going to be that stupid again. Even if it meant staying home so he wouldn’t run into Bob at any of their old haunts.

Fortunately, he did have something to look forward to. Halloween was just a week away, and he’d been invited to one of the biggest parties in LA. Sam Peterson, the movie star, had invited him, personally. Eddie cut Sam’s hair every two weeks, come rain or shine. He’d even been flown out to a couple of on-location sites when Sam was unable to get back due to his heavy work schedule. Sam was one of the most beautiful men Eddie had ever seen—the total Hollywood package. Tall, dark and handsome, with the bluest eyes and the whitest teeth, a hard chest, ridged abs and a narrow waist—together it had all made him People Magazine’s Sexiest Man three years running. Too bad he was straight or Eddie might have had a chance of dancing with the star.

Problem was...what to wear to the party. Sam had already told him he was going to be a vampire so that was out, and ghouls and zombies were so darned unattractive. Chances were there would be quite a few hot young men there, bound to be one or two gays, and Eddie didn’t want to take the chance of scaring any of them away. So what were the options? Viking, gladiator, cowboy...? All done to death every year. And he wasn’t about to do drag. Wearing heels all night was not his idea of a fun time.

He took another look at his face in the mirror and hoped the swelling would go down before the party—otherwise, only monster makeup would hide all the bruising. Damn you, Bob! Eddie’s head turned in the direction of the living room as he heard his phone ringing. For a moment, he was tempted to let the answering machine pick it up. If it was Bob—and he had just enough cold nerve to call him even after what he’d done—he didn’t want to answer. But it might be Randy or Jenny. He ran to the phone wishing he had caller ID.

“I’m good, but I heard what happened last night with that bastard Bob.” Anger edged her voice as she continued, “Randy called this morning and told me. Why don’t you set the cops on the son-of-a-bitch?”

Eddie sighed. “The cops aren’t going to do anything about two fags having a bitch fight, Jenny.”

“But that’s not what happened.”

“I know that, and you know that, but the cops really don’t give a damn. Anyway, I don’t want to talk about Bob. Wanna get some lunch later? I have the day off.”

“That’s why I’m calling. Randy and I want to take you out for lunch. Get your mind off the nasties of this world.”

“Uh, uh. Our treat...and Eddie…” Jenny hesitated for a moment. “Why can’t you fall in love with Randy?”

“He adores you. He was so mad about what happened...”

“I know, and he got himself a fat lip for trying to interfere.” Eddie chuckled. “I think Bob got a big surprise when Randy got in his face in my defence.”

“You two would make a great team. He’s cute—”

“Jenny, stop with the matchmaking. I love Randy. He’s my best friend. And that’s the way I’d like to keep it. Sex just fucks up everything.”

Jenny giggled. “Isn’t that the idea?”

“I’ll be there—and thanks.”

Eddie put down the phone, shaking his head. Jenny was singing that same old tune again. Ever since she’d introduced him to Randy Cox, close to six years ago, she’d been trying to push them together in a very unsubtle way. Even after Eddie had met Bob, she’d kept up the ‘Randy would be so much better for you’ routine. Just as well Bob was too into himself to ever catch on.

This book is an awesome read! I loved the characters and the story in this book. Plus it deals with daily issues that we all have, FAMILY! The love story between the Joshua and Eddie is so touching...

Mr. Bowie is working out to be a promising candidate for my “beloved vampire stories” collection of books. Though this is my first time venturing into one of Mr. Bowie's worlds, I can ass...

Share what you thought about Halloween Angel and earn reward points.