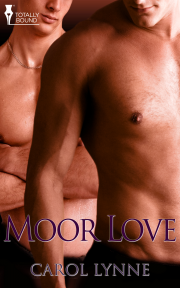 On the moors of North Yorkshire, American college student Caleb Winters falls in love, not only with the rolling hills of heather, but with the man who hired him for the student work program. To Caleb, Jon Cook is a mystery.

Rendered mute years earlier in the automobile accident that killed his father, Jon lives a life of secrecy. From the beginning, Caleb begins to suspect that Jon's gruff exterior hides the soul of a lonely tormented man. Suddenly taking care of Jon's sheep isn't nearly as important as drawing the older farmer out of his shell and into the land of the living.

Looking out of the window, Caleb watched as the train wound its way through the Yorkshire countryside. He still couldn’t believe he was here. It had taken nearly a year of paperwork to get his student placement, but the day had finally arrived.

He quickly scanned the folder of information he’d been given. Smiling to himself, he closed the folder. He’d looked at the damn thing so many times, he already had it memorised. He’d be working for Jon Cook on a small sheep farm just inland of the small seaside town of Whitby.

According to the information he’d received, he’d have his work cut out for him. After his mom had read it, she tried desperately to talk him out of going. No, Mr. Cook wasn’t a serial killer or anything, just different.

Mr. Cook had been in a car wreck nineteen years earlier. The accident took the life of his father and left him with a pronounced limp and an inability to speak. A more recent fall while dipping his sheep had aggravated his earlier injury. Unable to tend to his sheep in the fields properly, Mr. Cook had finally agreed to sign up for the work placement program.

Caleb already knew they would have a problem, because Mr. Cook kept insisting he didn’t need a worker for an entire year, but the program only placed students for that amount of time. Once Caleb started working, he’d be there for the designated time, or risk losing his college credits.

As he leaned his forehead against the glass, Caleb lost himself in his own problems. He’d come out to his mom when he was sixteen, but he’d waited to tell his dad. As the years went by, he kept promising himself he’d do it, but the timing had yet to be right.

After his folks had divorced, Caleb and his mom moved back to the Kansas City area, leaving his father and the family’s farm behind. His formative years had been spent on baseball fields and malls instead of barns and pastures.

He’d been sent to Iowa for two weeks every summer to stay with his dad. It was during this time, he’d felt the divide between them grow. Usually he’d spend the entire time sitting on the porch or in front of the old television. It wasn’t that he didn’t want to help his dad on the farm, he just didn’t know what to do. His dad had little patience and often lost his temper while trying to explain the way to perform a particular task.

Caleb had found getting out of the way made them both much happier. That all changed after coming out of the closet to his mother. At the age of sixteen, Caleb decided it was time to roll his sleeves up and learn everything he could about sheep. Prior to his two week visit, Caleb searched the internet, reading every article he could find.

He knew it was the summer he’d finally tell his dad that he was gay and wanted them to have somewhat of a relationship established before then. He soon found out that reading about sheep and actually caring for them, were two different things.

His dad was a little more patient with him, but Caleb could tell he still had a lot of bridging to do before coming out to him. Since then, he realised that he actually enjoyed learning about farm animals, not only sheep, but pigs, cattle and even chickens.

When it came time for him to apply to a university, Caleb chose Kansas State because of its well known agricultural program. He knew he didn’t want to be a farmer or rancher, but he was finding out there were all sorts of careers a person could get into as long as he had agricultural knowledge.

In the end, he decided to go for a dual degree in both agricultural science and marketing. He’d interviewed his sophomore year with a national feed company and thought that was the career path he’d enjoy the most.

Maybe a year away would strengthen his resolve to speak with his dad. Hell, it couldn’t hurt anyway. Shifting his gaze away from the breathtaking scenery, Caleb looked down at the folder once again. He wondered how Mr. Cook felt about gays. Would he be expected to put that part of his life on hold for the next year?

Caleb wasn’t sure of how tolerant the people in and around Whitby would be. He’d grown to enjoy a fairly active sex life and if he had to, he’d put his desires on hold, but it wouldn’t be easy. He’d at least make sure his sexual orientation was known up front. Even if he couldn’t engage in one of his favourite pass-times, he at least didn’t want to hide it any longer.

Jon Cook was thirty-six, only thirteen years older than Caleb, but from the few letters he’d received from Mr. Cook, he seemed much older. Maybe it was being unable to speak. Caleb wasn’t sure, but the letters were always very well written and straight to the point.

The sign along the track and announcement over the speaker above his head, declared he’d arrived in Whitby. Caleb quickly stuck the folder into his laptop case before looking at his new hometown. He could see the ocean off in the distance. Caleb couldn’t remember ever being this close to the ocean. Well, he’d flown over it on his way to England, but this was different. This was definitely a new chapter in his life.

Share what you thought about Moor Love and earn reward points.