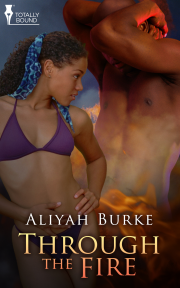 An uncontrollable wildfire rages reuniting two old lovers, will they survive or will the blazing inferno snuff out their happy ending?

Teague 'TJ' Johnson loves being a smokejumper. Roaring down a fast line into the middle of a fire didn't faze him, but losing the only woman who'd ever meant anything to him did. Five years later and he could still see her just as plain as day: five-seven, toffee skin, an athletic build given to her from years of boxing, and a smile that could melt glaciers.

Erin 'Mongoose' Watford is a mechanic in her area's Forest service air squadron, The Hellcats. When they were called in to assist out in the Pacific Norwest, she ran into a man she never thought she'd see again. He looked better than ever. Standing six-one with dark mocha skin and medium brown eyes that seemed to stare into her soul, he made a most appealing and alarming package. Erin had run away from the feelings Teague had stirred within her, and seeing him again made those feelings blaze with a ferocity that rivals the very fire they are fighting.

TJ has no intention of letting Erin go again. When Erin finally accepts where her heart truly lies will she be too late to tell Teague?

Strong masculine hands moved over her naked, soapy body. The warm solid flesh of pure man pushed against her back. Soaped chest hair, a chiselled torso, and a rock-hard erection only heightened her pleasure as the smooth shower tiles supplied her overly sensitive breasts with another sensation.

He lifted her, murmuring words of pure seduction in her ear, and impaled her upon his rigid cock with one powerful stroke. Her body convulsed as he speared her. Her legs twisting back to hook around his legs. His body was her sole support of her weight and that allowed maximum depth for him.

Powerful arms moved her up and down his cock, using gravity to his advantage for the intense thrusts. She moaned in pleasure, her cheek plastered against the wall of the shower. Her skin tingled where his fingers touched her sides, each of his calluses bringing more eroticism.

Breathing was more and more difficult as she soared closer to the euphoria the mere touch of this man brought her to. The intensity of his strokes increased as he drove into her over and over again.

Eyes closed, she felt her body tingle with the feelings he created within her. Pants grew to moans which turned into screams of unadulterated pleasure. His fingers dug into her sides as her internal muscles tightened around him—

“Welcome back to the beautiful Pac Norwest.”

Erin Watford jumped as her friend Tinker’s deep voice shattered the images her mind had woven. The loud engine of the cargo plane they rode in reminded her they should be landing soon. Then there would be no time for dreams, for harsh reality faced them on the ground of the Pacific Northwest where there was a battle against a raging wildfire.

“Damn you, Tinker,” she snarled in an aroused voice as she desperately tried to hold onto her dream man and his magical, sinful touch. While Tinker was extremely handsome with his inch over six feet high body filled with lean muscles, dark blond hair cut in a crew cut, and blue eyes that were made for the bedroom, she had no romantic feelings for him. He was a friend, a very good friend, but still only a friend.

The blond man beside her leaned in close. “Sorry, Mongoose,” he whispered, using her nickname. “I had to wake you. Your moans, despite being very lovely, were getting much louder.”

She felt the flush of embarrassment creep over her dark cheeks. Thank God for my darker skin. “Shut up,” she ground out. The harsh words were belied by the smile that crept across her face.

Positioning his mouth by her ear, he muttered, “When are you gonna moan like that for me?” Without missing a beat, Erin turned her head so their mouths were scant millimetres apart and breathed huskily, “As soon as,” her eyes fluttered, “you abstain for a month.”

Tinker’s eyes grew wide before he erupted with laughter. “That’s not fair,” he protested as the plane slowed to a stop.

“Guess I’m just not worth losing the hordes of women you sleep with.” Erin had no animosity in her voice. Tinker was a confirmed bachelor, he loved women and never seemed to be lacking for feminine companionship. He flirted nonstop, heavily and outrageously with her, but he also respected that they were members of the same fire fighting team and would never share the same bed.

“Damn,” he complained. “You know, you’re the only woman who turns me down. Not to mention the only one I keep chasing.”

“Flyboys do love the chase.” Erin unbuckled herself, stood and tapped a finger on the end of his nose. She stepped past him and grabbed her bag as she headed for the rear hatch of the plane which had been lowered. Two steps were taken before she looked back. “Besides, you don’t want me. The first time you pissed me off, I’d knock you on your ass.”

Leaving him, she walked off the plane with her good friend, Harriet, another mechanic. Her eyes took in the area where her team’s planes and choppers were located. It was a makeshift hanger, but considering they had been asked to assist, it was expected. She inhaled deeply and smiled as the familiar scent of jet fuel drifted to her then frowned as she picked up the smell of smoke from the fires.

4.5 out of 5! Through the Fire by Aliyah Burke was one hot read...I would recommend this read to my friends. I'll be picking up another of Ms. Burke's books in the near future.

Share what you thought about Through the Fire and earn reward points.