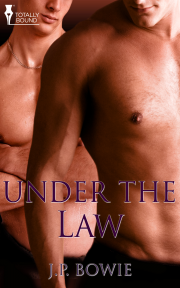 Britain's just going 'decimal'; Carnaby Street is the centre of fashion—all of Europe goes there to shop. Soho has yet to become the gay hub it now is. There are no computers to speak of, no Internet dating, no mobile phones, nor even answering machines or VCRs—certainly no CD's or DVDs. Yet, somehow Britain survived, and the Brits even managed to enjoy themselves, despite all that deprivation!

Peter Buchanan is a struggling young singer/actor waiting for his big break in the West End of London. John Reed has been a London bobby all his working life, and has recently been promoted to Inspector. When these two men meet by chance, there is an instant attraction — but not before some bumps in the road to love have been straightened out…

The dark haired, slender young man, dashing up one of London’s busy streets glanced at his watch as he hurried. Peter Buchanan was late. His audition for a part in a new West End musical had run longer than he’d anticipated. Dodging traffic on London’s busy streets, he raced toward the pub where he was meeting his sister Janet for lunch. He hated the idea of keeping her waiting. She’d sounded so distraught on the phone earlier in the day, and he knew the reason—always the same reason—her damned husband, Rob.

The Salisbury on St. Martin’s Lane was a lively, busy pub at most times of the day, and especially popular with tourists, but the food was good and the beer reasonable. Britain had recently gone ‘decimal’, and while the Brits struggled to identify the strange new coins they’d been lumbered with, some establishments had taken advantage of the situation, and raised their prices alarmingly, but not the Salisbury.

Arriving slightly out of breath, Peter spotted Janet immediately, and his blood boiled when he saw the bruised eye she was sporting. Damn Rob, he thought. Now, I’m really going to lay him out. Tough thoughts, but Peter knew in a bout of fisticuffs he was nowhere in his brother-in-law Rob’s class. The creep had been in the Royal Marines, an elite squad of tough commandos whose reputation was without parallel. Still, Peter would love to land one on that smug, supercilious face.

“Janet…” He sat beside her and pulled her into his arms. “Why do you put up with this?”

“Because I’m pregnant,” she whispered against his cheek.

Peter looked at her, shocked. “You’re pregnant, and he’s hitting you? Why, that fucking bastard—”

“Oh, like that’s an excuse? Janet, you have got to leave him. Go home. Mum and Dad will take care of you until the baby’s born.”

She nodded. “I know I have to. I want this baby, Peter, and I’m afraid that he’ll...” She choked on the words Peter knew she was trying to say. He held her tightly pressed to him, and kissed her cheek while she cried. Out of the corner of his eye, he saw a couple, obviously American, regarding him with some suspicion. Lord, he thought, am I the errant husband trying to placate my wife after a secret affair has come to light, or the bastard boyfriend breaking it off? Either way, I’m a shit, in their opinion.

Janet hiccupped and pulled back from his arms. “I need a drink,” she said, dabbing her eyes.

“You’re not the only one,” Peter chuckled. “And while I’m getting them, perhaps you’ll explain to the couple giving me the evil eye, that I’m your loving brother, come to give you comfort in your hour of need.”

“You do go on,” she said, wiping her eyes and trying to smile. “I’ll have a white wine—a large one. It’ll be the last ‘til after the baby’s born.”

When Peter returned with their drinks, he found Janet deep in conversation with the American couple who, by the sounds of it, were encouraging her to go home to Scotland, that beautiful country they had apparently just visited.

“And we were so lucky,” the wife gloated. “The weather was so much better than here in London.”

“I’ll say you were lucky,” Peter said, plopping down beside Janet and handing over her glass of wine. “Last time I was home, it snowed—in June!”

Outside the Salisbury, Peter gave Janet his spare door key. “You can stay the night with me—then, if you want to, we’ll find out about train times.”

“Won’t Scott mind my being there?”

Peter grimaced. “Scott moved out two months ago. I just haven’t got around to telling you. You’ve had enough worries of your own.”

“I know. I should have told you, but you know…”

“I had worries of my own.” Janet sighed. “Now I feel even worse. You’re always there for me, and where was I when you were all upset and lonely?”

“It wasn’t that bad really.” Peter gave her a hug. “Now, off you go. I’ll see you later, when I’m done over at my audition.”

“Good luck,” she whispered. “If they don’t take you, they’re daft.”

I lived in London for several years so this story brought back lots memories of the hectic lives we lived in those days - lots of parties and shows. I actually felt as if I knew John and Peter by story's...

I like how smooth and joyful their relationship blossoms and develops, and both the characters are very nice.

Share what you thought about Under the Law and earn reward points.