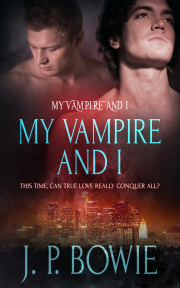 My Vampire and I

Book 1 in the My Vampire and I series

When young Roger Folsom attends a costume party thrown by friends for his twenty-fourth birthday he is immediately captivated by Marcus Verano, a handsome stranger masquerading as a vampire—except Marcus is the real thing.

Spirited away to the vampire's mansion, Roger is introduced to a new life of unabashed luxury, fascinating stories—and hot sex. Everything is going just fine for Roger, until his new lover's old enemies show up seeking revenge, and Roger's blood.

Determined to save one another from the gruesome deaths planned for them, they embark on an adventure that takes them from the weirdness of West Hollywood to the wildness of a vampire's castle in the hills of Rome.

This time, can true love really conquer all?

He lies in the vast, cold mausoleum that has been his resting place for hundreds of years... Marcus Lucius Verano, vampire. Time has neither ravaged his countenance nor his body. His pale, chiselled face is unlined; his black hair shows no sign of gray. He lies as though asleep; a young man in the prime of life—strong, virile, handsome...and deadly.

Deadly, that is, to those who have sought to destroy him, and there have been few who’ve dared. Among those who love and admire him, he is renowned for his powers, his strength, his intelligence, and his beauty.

He has loved completely but once, and that love was taken from him in a heinous fashion—by one he will never forget, nor forgive, no matter how many centuries pass.

In his death-like sleep, he dreams, not of revenge, but of redemption in the arms of one who would love him as no other ever has. He has a vision of such a one...but he must wait, for this one has not yet born. Still, the face in his vision becomes tantalisingly clear to Marcus in his repose—young, fresh-faced, with golden hair, and laughing blue eyes, he moves through the vampire’s netherworld with a confidence born of unsullied youth.

The vampire awakes and rises from his bed of marble. As he strides from the mausoleum into the darkness of the night, the vision haunts him and will continue to do so for many years to come.

But now he hungers for the lifeblood that will sustain him, and so he pushes from his mind all thoughts that would distract him from the hunt. His eyes scan the darkened streets; he waits and is rewarded by the sound of footsteps and a voice tipsily singing an old drinking song.

He smiles and steps out in front of the man who looks up at him without fear. The vampire’s green eyes hold his in a calm and steady spell.

If there was one aspect of life I liked, better than anything else, it was when five o’clock came on a Friday and I could skip out of Carter’s Colonial Bank and head for Mo’s, my favourite watering hole. There I would meet my friends, Mark and Kevin, and we would knock back a couple of martinis, before deciding on where to eat. Except, this particular evening that starts my story held something that, even in my wildest and most bizarre imaginings—and that’s saying something—I could never have anticipated. You see, it was the start of a rollercoaster ride that, quite literally, changed my life forever.

I’m a horror movie freak. In my opinion, there’s nothing quite like a good horror story to get me going—I mean, sexually. There’s something about the adrenaline rush that comes from being scared out of your wits—it always makes me hard. Could it be because I was born on October thirty-first —Halloween—and a Scorpio?

Anyway, I’ve seen just about every horror movie ever made—some terrific, some so bad... Actually, I kinda like some of the bad ones too. My favourite vampire was Frank Langella...sexy, even better than Brad Pitt, and a long way from being the monster conjured up by Bram Stoker in the book Dracula. That baby gave me nightmares all through my teens. My favourite werewolf was Michael Landon in I Was a Teenage Werewolf. He was so darned good looking before he grew the whiskers and the black nose... I would drive my mom and dad wild, always wanting to stay up for the late night horror flicks. I’ve got quite a collection of those old movies and still get a kick out of them.

I’d heard through the grapevine that Mark, knowing my fondness for all things spooky and weird, was planning to throw a ghoul party for my twenty-fourth birthday. Everyone had to come in costume—the more far out and scary the better. Even before he officially told me, I had begun planning my own costume. I was going to cheat and not be scary—just fabulous! No dumb Frankenstein’s monster mask for me!

I’d been working out pretty hard at my gym on Santa Monica as of late, so I figured whatever I designed, it should show some skin. I mean, why hide what I’d been working so darned hard on? Oops, sorry...my one-track mind. Anyway, I had decided to be a devil—a golden devil. All I’d wear was a gold lamé bikini. The rest of me would be all me—with some golden touches. Gold boots and gold horns atop the golden hair with which I am naturally blessed would complete the ensemble. Oh, one more thing, a golden trident. I decided against a forked tail—that just might get in the way or someone might stand on it or—well, a lot of things could go wrong with a tail. Right?

When the big evening arrived, and I stood in front of the mirror, having lightly sprayed my body with some gold sparkly stuff, and I thought to myself, Roger, you look great! Something about the golden sheen of your body makes your newly toned muscles look sleek and firm. I was kinda turned on just looking at myself. I smiled smugly. The bulge in my bikini added a certain ‘je ne sais quoi’...whatever.

I stuffed my driver’s license and some money from my billfold into my boot, and I was ready to go, go, go. My friend Kevin was to pick me in approximately five minutes—just giving me time for a quick belt to put me in the party mood, so to speak.

The doorbell rang. Kevin’s early...? I wondered with some disbelief. Kevin’s never early, but there he was, wearing a white sheet and nothing else. He flashed me, just so I was sure. Jeez. That was scary! Kevin’s a cutie, with big brown eyes and auburn hair he keeps really short, almost military length.

“You look good,” he said, leering at me. Kevin had been trying to get into my pants ever since I’d met him, telling me I’d love his big dick. I liked him, I really did, just not in that way. He eventually got the message but still couldn’t resist the odd innuendo or pass. Like right then, as I turned to lock my apartment door, he pinched me, hard.

Hmm...Well, that was a compliment, I guess. “Thanks,” I said, slipping the key into my boot. “Okay, let’s go, so you can frighten all the boys at the party.”

Best vampire story I've read - bar none! I was totally captivated by Marcus and Roger - Mrcus is obviously hotter than hot and Roger's cuddlesome and funny! I laughed out loud at some of his escapades...

I absolutely loved this book the first time I read it. After the second time, I loved it even more. J.P. has a way with characters and emotions that draw the reader in. Marcus is every vampire-lover's...

Share what you thought about My Vampire and I and earn reward points.