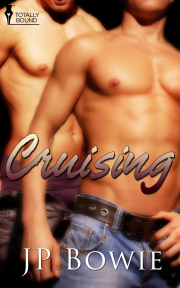 Adam Brenner is looking for a life change when a long-time friend and associate, Tom Hathaway, offers him a position as casino manager aboard The Maid of the Seas, a luxury cruise ship out of Port Canaveral, Florida.

Trying to leave behind haunting memories of an alcoholic boyfriend on a path to destruction, Adam succumbs to the Latin charm of Vittorio Borghese, the ship's architect. After a night of hot sex, Adam thinks he might have found the one to help him forget the misery of the past, but Adam soon discovers that life on board a floating resort has its drawbacks to go hand-in-hand with the perks.

Dismayed by the hostility shown toward him by the ship's captain, and Vittorio's seeming indifference, Adam finds comfort in the company of Brett Jarvis, a talented singer/guitarist who plays nightly in the ship's lounge bar. The two men quickly form a warm and loving relationship, and Adam starts to look forward to ‘a life on the ocean wave', thinking that it will now all be plain sailing.

However, he soon discovers that out on the vast regions of the Atlantic, sudden squalls, both natural and man-made, happen all too frequently—and some people are definitely not the great guys they appear to be.

I stood dockside in Port Canaveral, Florida, gazing up at the ship I would call home for the next six months or, perhaps, even longer. The smartly painted blue and white hull towered over me, its lower decks dotted with portholes, its upper decks with larger windows. As I craned my neck, I felt a quiet surge of excitement and anticipation course through my body. I could make out the white uniforms of the ship’s officers as they strolled back and forth on the topmost deck. I’d later learn this was called the bridge—but as I’d never been onboard a ship before, all of that jargon was still to be learned, along with the protocol and the expected discipline of life afloat, far from the laws and jurisdiction of mainland America.

I turned to look at the guy standing next to me, Tom Hathaway, the man who had hired me to manage the ship’s casino.

“Very impressive,” I said, smiling at Tom. “I think that The Maiden of the Seas and I are going to get along very well. She’s just what I need right now—a lady who’ll help me forget all the shit that’s been going on in the last year or so.”

Tom grinned. “Are you telling me you’re into ladies now?”

“No, you know as well as I do, that’s not going to happen—at least, not in the way you mean. Although, after what Randy put me through, it might not be a bad idea to have a complete change of life, along with a new job, a new home...”

“And pussy instead of cock,” Tom added, chuckling. “Well, if you’re really interested, I can fix you up tonight when we get back to the hotel.”

I laughed, and smacked Tom lightly on the shoulder. “Don’t waste your time. I’m not that depressed.” I took another long look at the cruise ship. “When do we go on board?”

“Tomorrow morning. There’s a crew meeting at nine o’clock, in the theatre.” Tom gave me a serious look. “Just make sure all the dealers are there, and without hangovers if possible. The captain’s a real stickler for the rules and regulations. Howard wants us all to make the right impression from day one.”

Howard Marsden was the casino concession owner, a Miami attorney who I’d gotten on well with on our one and only meeting but was known to have a nasty temper if those he relied on didn’t come through according to his wishes.

I nodded. “Let’s both keep an eye on them tonight. That hotel bar is a well known pickup spot. I don’t want to crimp their style, but you know these guys once they’ve had a few.” I was talking into the wind. After a couple drinks, Tom was just as likely to lead the way to where angels fear to tread—mainly the hotel bar filled with delectable ladies of easy virtue. I only hoped I could keep Tom and the young male casino dealers from getting too drunk and being unable to make the meeting in the morning.

The hotel at Cocoa Beach was a lively place after five o’clock, the bar filling up early for happy hour. I spotted two of the dealers already leaning over the bar talking to the pretty bartender.

“John, Jeff—a word please.” I beckoned them from the bar entrance.

“Hey, boss.” Jeff Edwards, tall, broad shouldered and amiable, grinned at me. “Join us for a drink?”

“Not right now, thanks. Listen guys—tomorrow we have an important meeting on board the ship. Howard’s going to be there, and the captain expects us all to be in attendance—no excuses. So please don’t get hammered tonight. I need you all to be on your best behaviour.”

...this is the first J.P. Bowie story that I've ever read...that's all about to change, because after reading Cruising I know that I really want to indulge myself a little more...not what...

Share what you thought about Cruising and earn reward points.