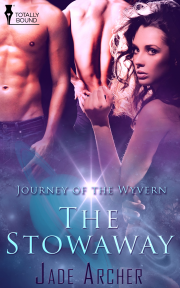 Book 1 in the Journey of the Wyvern series

Can one small stowaway teach two hardened warriors a lesson in life and love?

Arek and Devlynn were once part of one of the most vicious gangs of space pirates in the galaxy—the Fennrus Group. But when Arek's little brother was killed trying to follow in his footsteps, Arek quit. He walked away. And Devlynn went with him - having been devoted to the man since they were children. Unfortunately, no one leaves the Fennrus Group. None that live to tell the tale anyway. Forced to lay low if they are to survive, Arek and Devlynn find themselves doing supply runs between the most isolated agricultural communities in the galaxy just to scrape by. Which is how they end up with one small, feisty stowaway.

Having recently turned twenty-three, Rachel is facing what she considers the ultimate enslavement—an arranged marriage to two brothers from the neighbouring farming settlement of Thebia 3. So when she sees an opportunity to escape while waiting for her intended grooms at the local space port she seizes it with both hands. She wants freedom, adventure, the chance to visit every star in the night sky. What she gets is two stubborn, difficult, although admittedly gorgeous, ex-pirates with a temperamental space transport, a vicious past out to get them and little to no idea what to do with the feelings that simmer below the surface between them all.

Life with Arek and Devlynn is certain to be an adventure, provided they all survive long enough to enjoy it and Rachel can work a little magic that is.

Rachel dug her fingernails into her palms and tried to contain the rage building inside as her mother, sisters and various other female relatives continued to fuss over her. Primping and curling her hair, painting her nails and smoothing out the lines of her bonding dress. It was all slowly but surely pushing her over the edge—eating away at the last tattered threads of her control until she wanted to scream.

The need to shout, “Back off! You’re suffocating me!” bubbled up in her throat, but she ruthlessly swallowed it down. It wasn’t as if it would make a difference anyway. Her kinswomen were on a mission—they weren’t going to be put off by a minor thing like Rachel not being able to breathe.

Her stomach twisting in angry, frustrated knots, Rachel turned her head to stare out of the cramped private waiting room’s single observation window. But even the sight of the bustling spaceport couldn’t distract her today. Normally, on those rare occasions she got to come to town with her family, she was glued to the viewports that overlooked the main dock. She loved watching the dazzling array of space-going vessels coming and going. The strangers in their bright, alien clothes heading out for distant star systems. The dock workers hurrying about preparing the ships for their journeys. She even enjoyed watching the other Thebia 5 farmers going about their business—trying to imagine how visitors to their world might see them. It was fascinating.

But none of it could divert her today. Today—possibly the worst day of her twenty-three-solar-year existence—completely stifled her usual interest. She had too many other things on her mind.

The whole situation was just so infuriating. How could her family think this was a good idea? That it was perfectly all right to bond her off to a pair of brothers from Thebia 3 she’d never even met. Hell, she hadn’t even had an opportunity to speak to them yet.

It was traditional in their sparsely populated solar system. A way of matching hard-working farmers with appropriate mates that could tend house and produce off-spring where there were thousands of clicks of solgram fields and not much else. But she felt like an object. A thing. A marionette being manipulated and hoisted into position.

A brightly painted, very false and unwilling marionette—done up to be something she wasn’t. She didn’t want to be a blushing bond-mate. She didn’t want to be the essence of grace and fertility or whatever the hell the thousands of beads and hundreds of loops of goldilum thread on her gown were supposed to represent. She had absolutely no desire to bond and settle down to raising a family and continuing the cycle of Thebian life.

A sharp tug at her waist finally snapped her control.

All things considered, she thought she sounded surprisingly reasonable—even if her voice was a little sharp for speaking to the house matriarch.

“Don’t be silly, dear. If we don’t get these tucks just right it’ll spoil the whole effect,” Mother Sorrtell replied, still pulling at the errant fabric.

“Do you really think they’ll care? Or even notice? They’re men, Mother.”

“Of course they’ll notice. You’re going to be their bond-mate, the mother of their young. Besides, they’re not the ones we need to impress, my dear. It’s your new kinswomen you need to look your best for.”

Rachel fought hard against the urge to grind her teeth.

“I hardly think they’re going to care much, either, Mother. They’re more interested in how many loaves of bread I can produce in an hour or how fast I can mend a seam.”

“Don’t be snippy,” Mother chided. “That tongue of yours is going to land you in a whole mess of trouble in your new home if you’re not careful, my girl. Don’t think the matriarch there is going to be as lenient as I am.”

Rachel took hold of her mother’s hand, stilling the restless fingers and finally getting her attention. With her mother’s eyes finally really seeing her, Rachel lifted the long red skirt of her bonding day dress, desperately trying one last time to make her mother understand.

Together, they make a lusty, explosive group.  They complement each other and discover parts of each other that they only fantasized about.
This was very quick read, but it was full of...

plenty of action and suspense in the plot...It's sexy and steamy...a very satisfying read and I highly recommend it, especially for those who enjoy a m/m/f menage.

Share what you thought about The Stowaway and earn reward points.