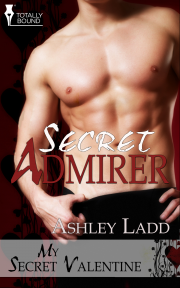 Book 2 in the Bats and Balls series

A Valentine's collection of secret liaisons…

A long-time secret admirer of star pitcher Blake, geeky nerd Wes asks Blake to make him over into his fantasy man - for someone else.

Geeky nerd Wes Donovan has a secret crush on Blake Kircherner, star pitcher of his baseball team. Unfortunately, the only time Blake seems to notice him is when he's making the last out for their team and losing another game.
With Valentine's Day and the team's annual Valentine's Day party coming up, he can't stand the thought of going dateless again. So he asks Blake to make him into a new man and help him make their coach Clay, jealous. In reality, Blake's the one he hopes to make jealous and to win after he's transformed into Blake's fantasy man.

Wes Donovan was never lucky, but today it seemed his luck had changed.

Blake Kirchner, the object of his fantasies, stepped onto the treadmill two rows in front of Wes, just enough to the right to award a perfect view of Blake’s toned, beautiful body and let Wes do the secret admiration thing.

The way Blake’s tight-sculpted gluts flexed and strained against his skin-tight shorts made Wes’ mouth water. Blake’s broad, well-muscled shoulders made Wes long to be swept into Blake’s arms.

Wes vowed anew to work out until he was so buff Blake’s mouth would water for him, too.

Light refracted off Blake’s shiny blue-black fall of hair, and Wes made out blurry images of the exerciser behind Blake in its silky fall. His breath hitched in his throat and his palms became clammier.

Again he wiped his hands on his towel then mopped away perspiration dotting his brow. The heart-rate monitor on his machine jumped from ninety-six to one-forty-five although he needed no external acknowledgment that he couldn’t breathe.

He’d give anything if Blake returned his affections, but the man had never been more than cordial if he saw Wes at all, so he was still very much a secret admirer.

Exhausted, he knew he’d pushed himself to his limits, but he was loath to leave as long as Blake remained. Maybe, just maybe, Blake would turn, catch his gaze and think him the hottest guy in the world.

He caught himself staring hard at Blake and wondered what he could do to win his affections when Blake suddenly stopped, turned and pinned him with a steady look.

Wes’ heart stopped, and he gulped. Guilty heat flooded his cheeks and dust coated his throat. The earth quaked beneath him as his feet were dragged out from under him, and he stumbled off the equipment.

The woman beside him caught him, but he cringed to the soundtrack of loud snickers, snorts, and even a few scathingly muttered, “Geeks.”

Raging with humiliation, he mumbled a raspy, “Thanks,” as he grabbed his towel, ducked his head and bolted.

Damn! So he wasn’t such a ‘secret’ admirer after all.

“Some piece of work you are, dude.” He was so mortified he didn’t think he could ever show his face in the gym again. Worse, he wondered how big a dork Blake must think him.

When he reached his car, he flung his soaked towel on the passenger seat and lifted his eyes to the heavens. “Why?”

The sun floated peacefully on the horizon as if everything was cool with the world.

“Why of all men I could have a thing for, why him?”

Wes would have a better chance of winning the next United States presidential election than getting Blake to look twice at him.

Still, he yearned only for Blake. Worse, he dreaded going to his baseball team’s Valentine Party stag—again.

There had to be something, somehow, he could do to trick fate and get his man.

Later that night, his mind kept flickering between the gym disaster and the disastrous ballgame earlier in the week. Remembering how he’d made the final out, serving victory to the opposing team, he cringed. As nice as he’d been, Blake obviously had itched to escape the minute Wes had mentioned going for pizza—just as every other guy had since Freddie. Even though he was on a gay baseball league and had, in fact, joined in the hopes of making sympathetic friends and perhaps find his perfect someone, he’d found more heartache and was about to call it quits. He didn’t need more rejection heaped upon what he got at the day job and just about everywhere else he went.

Mad at himself, Wes hit the junk food and popped in one of his favourite musicals. Afterwards, tired of the same old thing, he put on Gidget.

He so understood the skinny chick. Although she was smart and cute and had a lot of spunk, the guys thought she was a puny little midget who reminded them of their annoying little sisters and never thought of her as a full grown, desirable woman.

A geek all his life, it sure seemed men saw him as a pesky little kid instead of a full-grown man.

A growl arose in his throat, and he cracked his knuckles. So what was he supposed to do? Grab a surf board? Catch a wave? Although he only lived about five miles from the beach, there was barely a surfing community. What else he could do to win Blake? Wes’ gym workouts merely kept off the weight. He still looked like a hundred-pound weakling.

When Gidget decided to make Moon Doggie jealous by hiring another dude to be her date at the big clambake, his muscles contracted. He let out a howl when Moon Doggie showed up to take the guy’s place and be Gidget’s ‘date’.

He hooted at the Gidget’s scared to death expression.

Then he sobered as an absolutely brilliant thought rooted in his brain.

Why couldn’t he be Gidget?

Well, not sprout tits like a girl, but become an irresistible, mouth-watering hero Blake would fall for?

If such a snip of a girl could get her man, so could he!

The Rocky theme song blared through his skull, and he jumped up, flung back his head and howled. Then he thumped his chest. He was going to get his man or die trying!

The author Ashley Ladd takes the reader on a journey of self-growth, as Wes tries to become the man he thinks Blake wants, and discovery, as Blake realizes that Wes is just the man for him. Secret Admirer...

a wonderful story with a perfect classic movie style ending that really touched my heart...

Share what you thought about Secret Admirer and earn reward points.