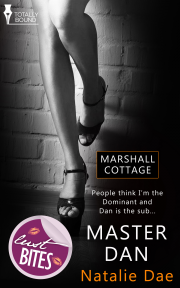 Book 5 in the Marshall Cottage series

People think I’m the Dominant and Dan is the sub. In reality, it’s the other way around.

Marshall Cottage was putting on a show night, and while we waited for the main event, Dan and I somehow made it onto the stage, giving a show of our own. Would it become clear to all who watched who was really in charge? Would they believe it? Or would our attempt in showing who we really were go completely unnoticed?

“Do you like the fact that we possibly give out the wrong idea, Dan?” I stared through the floor-to-ceiling window in our penthouse living room at the shimmering lights of the city.

There was something about this time of night, a blanket of black decorated with speckles of white, yellow, orange and red. It humbled me knowing there were others out there, in their houses or cars or walking the streets, spending the minutes of their lives in the best way they knew how. Daytime didn’t give the same impression and I likened it to our life. Two totally different sides to the same thing.

Dan came to stand beside me. I glanced at him, as always taken aback by how wonderful he looked in a suit. Corporate living gave him an air of authority and he wore it well. He was glorious with that dark hair, dark stubble, dark eyes. He had all the hallmarks of a good Master, seeing as he knew how to be in control at work five days a week—except he didn’t want control all the time. Being a manager of a vast company took discipline, but to be like that with no respite had promised to take its toll. That was where I had come in. Where my expertise was needed—to give him the chance to relinquish all worries and let someone else do the ordering around on his behalf.

In reality he was the one still doing the ordering. As much as people who saw us in the Domme-sub role might think the rest of our lives were governed by me, they’d be wrong. He was a Master—he dictated how things would go even while camouflaged as a sub.

“Give out the wrong idea?” he asked. “At Marshall Cottage, you mean?”

“Yes.” I returned my attention to outside. “Do you like knowing we’re not as people think?”

A plane streaked along in the distance.

“Of course I like it, but I don’t really give a damn what they think,” he said. “Time at the mansion is for me to de-stress, for you to give me what I need—for me to give you what you need. Once a week, that’s all, and I get a sense of balance back. It’s difficult being strong all the time. What we do there…well, it’s the only way for me to stay sane.”

“Some would say we’re insane.”

“They would—and that would be their opinion, one they’re entitled to. There are so many of them out there, opinions, but it doesn’t mean what they see in us is the truth. We know that. Does it bother you, then? What they think?”

Share what you thought about Master Dan and earn reward points.

Other books in the Marshall Cottage seriesView Series Page