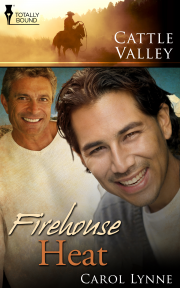 Book 16 in the Cattle Valley series

Despite the eighteen year age difference, Sammy Lee wants his new boss, Assistant Fire Chief, Leo Burkowski. Living and working side by side at the firehouse several days a week is wearing on Lee's control. When Leo asks for his help with a special project, Sammy can't take it anymore and makes his move.

Although Sammy is playing for keeps, Leo refuses to think of the relationship as anything more than a passing affair. Age has been an issue in the past, and although Leo's attracted to the younger man, he's learned the hard way to keep his heart out of it.

Will the heat generated between the two men be enough to melt Leo's resolve, or will Sammy's hopes go down in a blaze of disappointment?

Leo Burkowski lifted the barbell from its stand and began to do his normal set of fifty. He was getting into his zone when Sammy Lee popped into the room.

“Pirate’s Cove is about to start,” Sammy informed him.

“That’s okay. I’ve got other things on my mind today. You go ahead,” Leo replied. Hopefully Sammy would leave it at that.

“Naw, don’t worry about it.” Leo continued his workout without looking at Sammy.

“Well, okay then. I guess I can fill you in at supper.”

Leo heard the hurt tone in the other man’s voice, but didn’t acknowledge it. “Sure.”

Sammy left the small weight room, and Leo resettled the weights on the stand. He reached beside him and grabbed a towel to wipe his face and neck.

In the beginning, he’d enjoyed spending time with Sammy. The younger man liked to flirt and it was a nice feeling to know the handsome man was attracted to him. Over the winter things started to get out of control. Sammy became more obvious, and Leo became more tempted.

Leo sat up and braced his forearms on his knees as he looked out the window. The most recent deluge of snow was quickly melting under the unseasonably warm March temperatures. According to George, Cattle Valley didn’t normally dig out until well into April. Leo hoped they’d seen the last of the snow for a while, but he knew enough not to hold his breath.

Having been born and raised in Milwaukee, Leo was used to the snow, but that didn’t mean he had to like it. He’d much rather be outside, walking around town or swimming. Jogging used to be his passion, but with his busted-up knee, that particular activity was no longer an option.

Leo grunted at his thoughts and stood. Thinking about Randy always put him in a funk. He walked to the treadmill and started a slow pace to warm up. Randy’s infidelity was the reason he refused to act on any attraction he may feel for Sammy. He’d seen first-hand what fucking a younger man looked like. Leo doubted he’d have ever noticed how old he and Randy were getting if it hadn’t been for walking in on Randy fucking the twenty-three year old. The contrast in their bodies alone was enough to make Randy look like a creepy old letch.

His cell phone started to ring, drawing Leo’s attention away from his workout and his libido. He shut down the treadmill and crossed the room to his phone.

Leo grinned. He’d been working with Neil Peters as a grief counsellor since he’d arrived in town. Neil refused to talk to a psychologist regarding his feelings about the death of his boyfriend Gavin, and since Leo had a fair amount of training, he’d offered to befriend the younger man to help him out. There were a lot of people in Cattle Valley still trying to cope with the horrific grandstand collapse earlier in the year. Leo didn’t do anything special with Neil. They usually just rode around the EZ Does It ranch and talked. Leo thought more than anything, Neil just needed a friend.

“I was wondering if you’d like to go for a ride this evening?” Neil said.

“Can’t tonight. I’m on shift, but I can come out tomorrow night.”

“Okay, that sounds good. I’ll pick up a six-pack.”

Leo’s smile grew. Since Neil’s twenty-first birthday, the guy rarely missed out on an opportunity to drink beer. “None of that light crap.”

“See ya then,” Leo said before hanging up.

He picked up his towel and headed towards the showers. Maybe he should get Sammy interested in Neil. At barely thirty-years old, Sammy was closer to Neil’s age than Leo’s forty-eight.

Leo shook his head and rolled his eyes. He needed to stop worrying about Sammy. If he tried to push the younger man onto someone else, it would only cause trouble around the station. Living and working together would be hell if he pissed the guy off.

I firmly believe that Cattle Valley just gets better and better with each addition to the saga...The passion and tension between the two was enough to have this reader fanning herself as she devoured...

This is a wonderful addition to a really great series.

Share what you thought about Firehouse Heat and earn reward points.