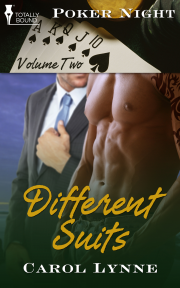 Book 4 in the Poker Night series

Angelo Pilato's worked hard to overcome his upbringing. Born in the rough part of the city, he had two choices, learn to fight or learn to talk your way out of confrontation. He isn't prepared to deal with a man like the sexy detective in charge of his friend's case.

Moody Torrance is vastly different than any man Angelo's ever been attracted to. Stubborn and bossy don't begin to describe Moody's personality and those are his positive qualities.

Moody hasn't the time or energy to put up with sissies. He may be gay, but that doesn't mean he's any less the Alpha he was born to be. Within minutes of meeting Angelo Pilato, Moody both hates and wants him. There's nothing more he'd like to do than bring the prissy man down a few pegs and show him life on the wild side.

How do a quirky neurotic and an unbendable Alpha make a relationship work?

Angelo Pilato yawned as he tossed his briefcase in the backseat of his Mercedes. He started the car and pulled out of his parking space. Maybe he’d just go home and drink enough wine to pass out on the sofa.

Three weeks earlier, he’d pushed Carl Blakely, the religious zealot who’d become the self-proclaimed defender of heterosexuality, down on the courthouse steps. That’s what was bothering him, not the fact it had also been the last time he’d seen a certain Neanderthal police detective.

He’d been hearing noises, feeling like he was being followed and getting fucked up phone calls in the middle of the night. See? Nothing to do with the detective. He tried to push thoughts of Moody Torrence from his mind.

The six-foot-six-inch detective wasn’t even his type. Sure Moody was sexy as fuck with that shoulder-length black hair and the body of a god covered in tattoos, but his damn feet had to be at least a size thirteen. The idea of those big, black biker boots made him shiver. Nope, definitely not my type.

Angelo made his way through the heavy rush hour traffic and pulled onto his quiet street. He waved at the neighbour’s kid as he grabbed his briefcase and headed towards the mailbox.

He noticed the flowers around the mailbox needed watering and groaned. He loved his flowers, but the thought of watering the front and back beds left him even more tired. Opening the front lid of the box, Angelo was surprised to see it stuffed full.

Confused, he reached in and pulled out the stack of mail. His breath hitched as he saw what was in his hands. Pamphlets. There had to be at least fifty of them, all proclaiming the evils of homosexuality.

Angelo wasn’t surprised to see the vile things were the product of Carl Blakely’s ministry. Fucker.

As he let himself into his house, something dawned on him. If one of Blakely’s flunkies had stuffed the pamphlets in his box, then they knew who he was and where he lived. He started to toss the vile literature into the trashcan but dropped them on the counter instead.

He reached for the phone and dialled 9-1-1. Despite what Trey had advised him a few days earlier, Angelo refused to call Moody.

After explaining the situation to the dispatcher, Angelo hung up and removed his tie. He retreated to his bedroom and carefully hung his suit and tie in the closet before placing his dress-shirt in the dry cleaning bag.

The dispatcher told him she’d send a car out, but Angelo knew without it being an emergency, he could be in for a bit of a wait. He quickly showered and dressed in his normal designer jeans and T-shirt.

His friends enjoyed teasing him about his wardrobe, but Angelo didn’t care. He’d grown up wearing used clothing purchased for pennies at the second-hand store in his rough Oakland neighbourhood. Now he had a good job, Angelo allowed himself to indulge in the things he’d never had as the kid of a single parent.

Opening his closet once more, Angelo stared at the racks of shoes. It was well-known he had a thing for sneakers, not only on hot men, but buying them for himself as well. He selected a pair of seldom-worn Nikes and slipped them on, tying them tight.

He wandered his way into the kitchen and selected a bottle of Cabernet Sauvignon from the wine rack. After uncorking the expensive bottle, he poured it into the crystal decanter and left it to breathe as he began to prepare a salad.

In the middle of cutting up a tomato, the doorbell sounded. Angelo set down the knife and wiped his hands on a towel before making his way through the living room to the small foyer.

He opened the door expecting to see a uniformed officer and found Detective Torrence instead. It seemed every time he turned around lately, Moody was on his doorstep. The guy seemed to be his constant protector and it was starting to put Angelo on edge. “What’re you doing here, Juan?”

Moody gave Angelo a bored look and leaned an arm on the doorjamb. “Did or did you not call into the police station?”

“If you mentioned Carl Blakely, you basically did call me. All things pertaining to the investigation into Overton’s death go through me, and the name’s Moody.” Moody leant down until he was nose to nose with Angelo. “Now, you gonna ask me in and tell me about it?”

Knowing he wasn’t going to win, Angelo stepped back and gestured Moody inside. “The pamphlets are in the kitchen.”

He walked back down his hallway, aware of Moody’s big body behind him, the heavy tread of biker boots sounded unusually loud on his pristine hardwood floors. Angelo motioned to the stack of papers as he poured himself a glass of wine without offering Moody any.

Angelo peered over the edge of the glass as he took a much needed sip. Moody didn’t even bother reading the pamphlet. The big man tossed them back on the counter with a grunt.

“You gonna share some of that with me?” Moody asked, gesturing to Angelo’s glass.

“Aren’t you on duty?” Angelo countered, taking another sip.

“Nope. Dispatch called me at home. I just got off an eighteen hour stakeout.”

It was then Angelo noticed the dark circles under the detective’s big brown eyes. He suddenly felt guilty. Turning towards the cabinet, he withdrew another glass and poured a generous amount of the crimson liquid before handing it to Moody.

“So...who were you staking out?” Angelo asked, trying to make conversation.

“I can’t really divulge that information.” Moody emptied the glass of expensive wine in three swallows.

Angelo was appalled at the total lack of consideration for such a fine bottle of wine. When Moody held out his glass, Angelo rolled his eyes. “If you’ll promise to savour it. This isn’t grocery store wine.”

Moody grinned and took a sip of his filled glass. “So, you wanna fuck?”

Angelo choked on his sip of wine, turning to finally spit it out in the sink. Not since he’d left Oakland had anyone dared speak to him in such a way. He wiped his mouth and turned back to the Neanderthal. “Is that the only reason you’re here? Don’t you even care that Blakely knows where I live?”

Moody set his emptied glass on the counter and reached down to rub the bulge pressing against the front of his jeans. “Wouldn’t be here if I didn’t.”

“Sure. And asking me to fuck was a spur of the moment decision,” Angelo snorted the reply. He couldn’t believe the nerve of the guy.

As always the characters are strongly written, with their emotions coming through clearly and realistically from the beginning...This is definitely not a book to be missed.

Carol Lynne's Poker Night: Different Suits is a tantalizing addition to the series...For those who have enjoyed Ms. Lynne's fantastic series of the year, you don't want to miss this book, and for newcomer's...

Share what you thought about Different Suits and earn reward points.