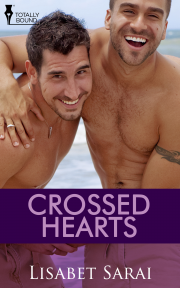 When love is the prize, everyone wins.

For the past six years, Jason Hofstadter has attended the Four States Annual Scrabble Tournament. Jason comes to the Four States for two reasons—to play Scrabble and to get laid. Every year since his first, he has managed to hook up with one of the other players for some sexual fun. This year he has a chance at the grand prize in the tournament. Meanwhile, he figures he has hit the jackpot when he spots handsome, bookish Matt Sawyer, who's competing at the Four States for the first time.

Finally, despite his lack of experience with tournament play, Matt ends up competing with Jason in the semi-final round. When Matt throws the game he should have won, Jason is forced to confront his own feelings—about winning, about casual sex, and about Matt.

Publisher's Note: This story has been previously released as part of the Gaymes anthology by Totally Bound Publishing.

Fresh meat. Jason Hofstadter grinned as he took a deep breath of the sweat and testosterone scented air. Men of all shapes and ages milled around the carpeted receiving area outside the ballroom, waiting for the registration desk to open. There were grizzled codgers in denim overalls and wire-rimmed glasses; toned young executives, dressed down but instantly recognisable by their leather-covered attachés—middle-aged dads with baseball caps and hairy chests—and dozens of succulent college boys, nervous and eager, in rock-band T-shirts and shorts that showed off their tanned thighs and calves. A few women wandered through the crowd as well, but as usual the participants in the annual Four States Scrabble Championship were overwhelmingly male.

That suited Jason just fine. He’d been competing since he was a senior at Nebraska U, and had placed in every tournament except his first. And every single year, even that first time, he’d managed to hook up with one of the other contestants for a bit of extra-competition stress relief.

He remembered the first guy, a thirty-something lawyer from Kansas City. Mike. Jason never did get the last name, even after two days of sucking the guy dry and wallowing in his cum. But he could still summon Mike’s smell, high-end cologne mixed with perspiration and butt funk. Mike had coffee-coloured curls scattered over his muscled chest, a short, fat cock that felt like heaven stretching Jason’s hole, and pale buttocks that held the livid imprints of gripping fingers long after Jason had emptied himself into the other man’s ass. Jason never saw him again, but he silently thanked Mike for establishing a tradition. Now Jason came to the Four States Annual for two reasons—to play Scrabble and to get laid.

The hotel air-conditioning was no match for August in Omaha, especially with this many people crammed into the low-ceilinged space. The armpits of his Abercrombie & Fitch polo were soaked. A guy his father’s age mopped his bald pate with a bandana. A teenaged hunk unbuttoned his shirt almost to the navel and fanned himself with his registration form. Yum. Jason didn’t really mind the heat. It helped diffuse the pheromones.

He scanned the crowd, looking for a likely prospect. Obviously he had to be careful in choosing a man to approach. Propositioning a homophobic straight guy could get Jason thrown out of the tournament. His intuition usually served him well, though. What did they call it back east? Gaydar?

Some of the college kids had great bodies, but really, they were too young. Anyway, they clumped together in anxious herds, laughing and pounding each other on the back. He’d never get one of them alone.

He liked mature guys, but this year there seemed to be more than the usual quota of beer bellies and receding hairlines. Then he noticed a handsome, athletic blond guy who was also wearing A&F, loitering by the coffee stand. Jason was just about to head in that direction when a curvaceous redhead in heavy make-up ran up to embrace his putative target.

Crossed Hearts" is the first story I've read by this author and it's an entertaining read...

Share what you thought about Crossed Hearts and earn reward points.