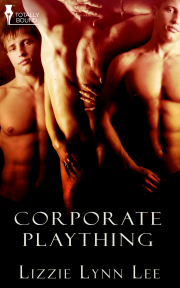 An inept spy gets more than she bargains for when she enters the Martel brothers' lair. Forget the mission, she will be lucky if she can keep her panties intact.

In the fashion world, triplets Justin, Raphael, and Matthew Martel are designer moguls. Unbeknown to the public, the brothers are actually half-human and half-nymph. When they put their secret nymph concoction into their new perfume, Surrender, in order to find their mate, Surrender unexpectedly becomes a wildly global sensation and sparks jealousy among their competitors.

Blackmailed by her father's cronies, Anna Vincent is forced to work for the Martel brothers in order to steal their secret formula. Anna is wary, but she doesn't have any other options. Either she gets that secret formula or her father goes to jail.

The Martels know their new personal assistant is a corporate spy. But what they didn't expect is that Anna is the woman they have been looking for as a mate. If Anna had told them the truth, they would've gladly helped her. But since Anna is too stubborn and prideful—and a bad spy for that matter—the brothers are compelled to teach Miss Prissy the joy of naughty, sexy, forbidden games until she admits she belongs to them forever.

People said the apple didn’t fall far from the tree. Anna Vincent realised the irony when she finally saw Justin Martel for the first time for a job interview. She sat in a piece of modern art contraption that was supposed to be a chair and mourned in silence at how fate loved playing her cruel jokes. Here she was, doing what her father did, which had ultimately put him in the hot seat.

Her old man was a computer whiz, a loving father, and the only family she had. A decent, good man his whole life until his friend lured him into a get-rich-quick scheme. The friend turned out to be a cyber-mobster and the scam was intended to extort her father into an even bigger scam. To add insult to injury, the syndicate had also blackmailed her too, to play spy in order to get ‘a secret formula’ from the Martel brothers just because she was also a prodigy with any machine that had a CPU in it.

If her father was a lousy hacker, then why did the syndicate think she’d be good at playing corporate spy? Anyhow, she didn’t have a choice. With his health problems, her father wouldn’t survive in jail.

Anna glanced furtively at her interviewer and his brother Raphael who sat near the window. Raphael did nothing but ogle her after she was seated. It was unnerving.

Minutes passed in silence as Justin pored over her r�sum�. Anna had seen his photos plastered across the tabloids and magazines in recent years, and she had to admit he looked even better in person. He and his two brothers had recently been crowned as the sexiest men alive and they all lived up to the title. Their mouth-watering beauty bordered on unreal.

According to her source, the Martels’ publicist had insisted that being indistinguishable triplets might not be the best campaign tactic since they wanted to sell their individual personalities to the public. And so, to tell the brothers apart from one another, the publicist suggested they wear coloured contacts. Justin would be the one with violet eyes, Raphael with blue, and Matt stayed with their natural eye colour of deep sea green.

As Anna studied Justin closely, she thought those gorgeous irises of his looked as if they were his natural ones. His large, almond-shaped eyes were shielded with dark, lush lashes that complimented his refined features and sensuous lips. His lightly tanned skin looked like caramel tempered in sunshine.

Anna unconsciously swallowed, pushing away the thought of licking him to see if he was as delicious as he looked. A burst of shame surfaced afterward. What am I doing? She pinched herself hard. Focus. Get the job.

She’d heard that Justin and his brothers were notorious Casanovas. Falling for these sex fiends was the last thing she should do.

Justin peered at her from above the edge of the papers then set them down carefully. “You have an impressive r�sum�, Miss Vincent. However...”

Her heart sank as he continued.

“...we’re not looking for someone of your calibre at the moment.”

Her hope shattered into pieces. She thought of her father who would have to spend the rest of his life in jail just because he was naive enough not to know that helping his friend recover access to some misplaced bank accounts was equal to larceny.

Her father had been duped. With the evidence in their hands, the syndicate had threatened Anna. If she was unwilling to do their dirty job, they would turn her father over to the Feds. Those bank accounts her father had hacked belonged to the US government. It didn’t take a genius to figure out that kind of crime carried a hefty punishment. And getting a job at the Martel design house was the only way to buy her father’s freedom.

Now, how was she supposed to get her hands on that formula if she couldn’t get close to one of the brothers? Anna unconsciously twisted her fingers until they were all white, thinking that perhaps she might still be able to salvage the situation. “If I may ask, sir, what kind of qualification do you expect for this personal assistant vacancy?”

Talk about setting the prey among the predators. This is exactly what happens to Anna, our heroine of this story. She is forced to go spy on the company owned by the triplet heroes of this story. Boy oh...

Wow-ee!...so hot it singed my fingers (and my e-reader)...I will definitely be checking out your back list for more yummy books.

Share what you thought about Corporate Plaything and earn reward points.