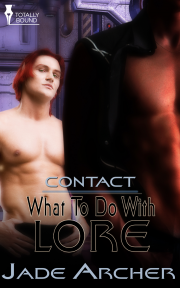 What To Do With Lore

A rough around the edges mercenary and a little spit-fire determined not to be anyone's pleasure slave—making contact has never been so volatile…or so much fun!

Rhyn is an ex-lawman working as a mercenary. He's contracted to protect large space freighters and passenger liners through space. He considers most sentient beings too annoying to be around on a permanent basis. He's content to swear at inanimate objects and tinker with his pride and joy—Baker's Pride; a bastardised freighter with more than one nasty little surprise under the hull skin just waiting to spring on the unsuspecting pirates he loves to goad and chase.

That is until his latest assignment brings him face to face with a stunning, fiery little cat man slave named Lore. Will the siren he discovers lead him to new horizons or will he crash and burn up on re-entry to reality?

Lore's not having a very good day. He's been reclassified as a pleasure slave, traded off-world, knocked on the head and placed in stasis and now he's woken up surrounded by four of the biggest, hairiest men he's ever laid eyes on. Oh! And it looks like they're pirates.

Just as well he's handy with a skillet and the pirates aren't immune to a few well placed hits! Will the sudden appearance of a glorious, dark skinned angel in a lawman's hat be the answer to all his lust filled prayers, or is he just another devil in disguise sent to snatch all his hopes and dreams away again?

Rhyn leant back in his creaky piloting chair and casually dropped his heavily booted feet down on the console. Baker’s Pride didn’t even twitch at the abuse. She just kept right on orbiting the cold moon of Siliam 3 with the tenacious persistence of the true mongrel she was. Rhyn smiled with satisfaction. He would trust the ugly looking, bastardised freighter over any of the sleek, top of the line models some of the other security contractors used any day of the week.

Sighing contentedly, he scratched absently at the triangle of smooth dark brown skin exposed by the open collar of his tunic, tipped his battered hat over his eyes and settled in for a nice long nap. This really was the way to live, he mused. No annoying rules and regulations, no commitments, no nagging partners or troublesome equipment. Ah! Bliss.

Just as he closed his eyes to relax and bask in the glow of his worry-free existence, the communicator began to chirp annoyingly, demanding his attention.

“Fffff…” Rhyn glanced sideways at an innocuous blue light blinking away placidly on the dash with frustration. “Fornication!”

A tiny alarm buzzed and the light began to flash red.

“Fornication—intercourse out of wedlock. Used as a profanity.”

“Shit!” How had the cheap little two credit gimmick known?

The buzzer sounded again and the irritating, cheap synth-voice began to chatter, “Shit—faeces. Commonly used as a profanity to express disgust, anger, or annoyance.”

“Stupid piece of crap.” Another alarm. “Shut up! You lousy…Ah! Fuck it! It was a stupid bet anyway. You win Felix. It’s not worth it,” he growled.

Several more buzzing alarms sounded before he finally managed to reach across and switch the tiny monitor off and hurled it out the hatch. He could just imagine the ribbing Felix and the boys back at the supply station would give him the next time he headed in and they found out he hadn’t even lasted two hours into the bet that he couldn’t stop cursing for a whole day. Of course, it would be all the worse for the fact he was on long patrol all by himself. There wasn’t another soul around for millions of clicks. You wouldn’t think there’d be too much call for swearing and cursing, but he’d already had to restrain himself twice before this last incident.

“Well, fuck ‘em.” He grumbled. So he had a compactor mouth. It wasn’t like he inflicted it on too many people way out here in deep space all on his own. And most days that’s exactly how he preferred it. The majority of sentient beings were just too annoying to be around on a permanent basis. Or even a semi-permanent basis.

The communicator on the console dared to chirp again. This time with more insistence. Stupid thing was the whole reason he’d lost fifty credits. He gave it the evil eye before flicking the receiver on.

“Baker!” He snapped, as a rather fuzzy image of a bloated Mebian came on screen. What the hell did they want now? he wondered irritably.

Mebian traders just gave him the creeps, and that was on a good day. The way their thick, blue jowls quivered when they were excited or anxious. Their beady little eyes that constantly looked around as if on the lookout for a bargain or the next lawman, but never quite met you in the eye. Worst of all was the slimy, superior voice that seemed inherent to the species and managed to grate on his last nerve every time.

Right now he was feeling far less than cordial.

Loved it. The characters were so great you couldn't help but fall for them. For such a short book it really gave you a good glimpse of what that world was like & intrigued you for the next in...

What to do With Lore is the first book in Jade Archer's Contact series which promises to be a wonderfully intriguing series. I know that there are, for sure, two books to come and I can hardly...

Share what you thought about What To Do With Lore and earn reward points.