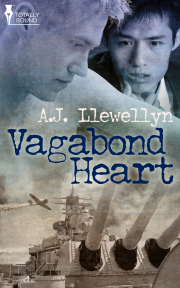 Book 1 in the Pearl Harbor series

Gay prostitute Tinder McCartney thought he had it made in WWII Honolulu…until true love and an attack on Pearl Harbor turned his life upside down.

Tinder McCartney is the only gay male prostitute working in Honolulu, HI during World War II. Like the 200 female prostitutes who live and work on Hotel Street, he services the armed forces drifting in and out of the islands. His life and work are controlled by the local police, yet because the cops don't think that there can be that many ‘depraved' men wanting the comfort of another man, Tinder is not only busy, but often in danger.

Living by very strict rules enforced by the police, Tinder cannot own or drive a car or bicycle, can't ride street cars or be seen in the company of other men. He can't visit bars or restaurants or swim at Waikiki Beach. Savagely attacked by two men one night, he is rescued by a local businessman, Jason Qui, the son of a Chinese immigrant and a former New England missionary.

Jason is not Tinder's usual type. But Jason offers to protect and house him. It seems like the ideal business arrangement until Tinder's Vagabond Heart can no longer handle the arrangement… and then on December 7, 1941, Pearl Harbour is attacked, turning the entire world upside down.

He looked so nervous. He licked his lips, his glance shifting from me to the sparse furnishings and back again. I knew he wanted me. He’d been waiting for hours. Now he was here, it was as if he felt too big when the room was so small. He kept his shoulders stooped when there was no need. My cubicle was half of a divided room, the other half partitioned by thin wood and curtains. Outside, I could hear the noises made by the rowdy men still waiting in line, competing with the hucksters of Chinatown trying to hawk everything from jewellery to photos with hula girls.

The sense of urgency gave an edge to the restless laughter. The smell of charbroiled pork wafted up to us from the Chinese caf� opposite my room on River Street. I stepped towards Howard, his heated gaze stayed on me.

I was nervous too. I could feel his tension, but also his excitement. I heard the radio go on from somewhere downstairs. Glenn Miller performed Three Little Fishes.

“It’s all right, Howard,” I said, drawing down the blind a little more. “You’re with me now.”

He jumped when I said his name. I’d only been trying to relax him. I was pleased at least that it appeared to be his real name. The darkened room hid a lot of things, except the strong smell of disinfectant. I’d tried to disguise it with waterlilies I’d picked after my morning swim at the Natatorium. All I could smell now was pork. There was nothing I could do about that. He put his glass down on the small chest of drawers beside the bed. I was worried it would leave a ring mark, but was more worried about him. His cock looked hard in his pants. I didn’t want him to leave unsatisfied.

I ran my hand down the front of his white duck pants. I was relieved he had such a nice big one.

As I got to my knees, I looked up at him. “Oh, Howard, this is such a surprise.”

He grinned then, giving me his full attention. It didn’t take long to liberate him from his pants. His cock leaked as I lightly ran my thumb over the tip. I squeezed. Outside, I could hear new music...from the saloon across the street. When the bar music kicked up, it meant it was time for the four-drink dose of Island Gin. The lethal, imitation brew was handed out to US servicemen every hour as they stood in line. It kept them buzzed, kept them spending, kept them in line.

Howard jumped when I leant closer to his thighs and went to work. He didn’t smell clean, but I didn’t care. I had three minutes and this boy was read to pop. I fondled his balls, licked his shaft and he gasped when I smothered that huge cock head with my whole mouth.

Somebody from the cubicle next door also used the Lord’s name in vain. I milked Howard for all he was worth. His knees trembled and I released him, swallowing his load.

I held him back until the man from the cubicle next door shuffled down the stairs and out to Hotel Street. Milaina, the housekeeper, knocked softly at my door. She made herself scarce as we approached. I let Howard out.

I handed him his glass. Not that he needed his horrible gin, he was pretty liquored up still, but damn it, he’d paid for it.

I didn’t respond in case anyone was listening. By the time he reached the bottom of the stairs, the guys still waiting to come up were none the wiser that Howard, the Marine, had just spent his three bucks on a male whore.

And for me, my first trick ever wasn’t bad. It wasn’t bad at all.

Let me start off by saying they never taught us this in School.I didn't know that the American government and some Hawaiian officials took the way the rights of woman and men they themselves hired...

Vagabond Heart by AJ Llewellyn is a deeply moving and highly compelling novel...The novel is bittersweet and sometimes heartbreaking, but Tinder and Jason's relationship is pure romance, and Mr....

Share what you thought about Vagabond Heart and earn reward points.