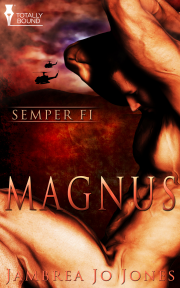 Book 1 in the Semper Fi series

The military is Marine Colonel Joe "Magnus" Rivers' reason for being. Protecting the United States of America from all threats is his sole purpose in life. His world is turned upside down when a woman is assigned to his team of elite Marines and his attraction to her threatens his career.

NCIS Special Agent Emily Patterson's orders: infiltrate Colonel Rivers' team and find the culprits behind a rash of kidnappings connected to a sex slave ring. Her mission parameters didn't include an attraction for Colonel Rivers but nothing in Emily's career could have prepared her for Magnus. Her job becomes more difficult as she gets to know the man behind the uniform and Emily finds herself wanting to prove herself to him, potentially exposing her identity before she clears Magnus.

Magnus and Emily struggle against their growing feelings for one another, both knowing the consequences of giving in to lust. Magnus is Emily's team leader and fraternising is against the rules. Emily is investigating Magnus and his team; getting involved with him could ruin her investigation and her career.

Reader Advisory: This book contains some violence and lots of swearing and sexual assault.

“Get the fuck outta my face, right now, maggot, before I skin you alive and wear your ass as a hat. What the fuck do you think you’re doin’?” Colonel Joe ‘’ Rivers yelled at the recruit and snatched the M4 out of her hands.

“Colonel.” Gunny Paul Roberts tried to calm him, but was furious.

Of all the fucking stupid things. Damn it.

“Fuck that shit. She got Stewart shot! This is why women shouldn’t be on the front fuckin’ line. Fuck!” ran a hand over his face and handed the gun to Corporal Moore. “No fuckin’ way is this going to work.” He turned to walk back to the barracks. He couldn’t stand to be around her for a second more. Fuck ups like her got people killed. Sloppy didn’t cut it in his unit.

“I know that, Gunny. It’s the principle of the matter.”

“Oh, he knows another word besides fuck.” The words were almost too faint to be heard, but they reached the Colonel’s ears.

whipped around and got up into the recruits’ face. In a quiet voice, he addressed the woman.

“What did you just say?” There was no need to speak louder, his voice seethed with anger and he was about to snap.

She stared straight ahead and didn’t look him in the eye.

The only smart thing she’s done so far. Take a deep breath, man. Calm down. No one was really hurt.

Reasoning with himself sucked, but luckily for the recruit, he was able to leash his anger or she’d be down for the count, woman or not.

“Not so tough now, huh, Patterson? Drop and give me twenty.”

Without hesitation, she dropped to the ground and started counting out her pushups. would expect no less and his team knew it. No one fucked with Mag, at least not to his face.

“Moore, take over PT.” He turned back to Roberts and gestured for him to follow. “Roberts, I don’t think I can keep this up. What was the General thinking? This woman doesn’t belong here. She’s some military brat trying to prove herself. How are we supposed to make her into a soldier?” said in frustration.

Roberts looked back at the woman doing pushups.

glanced back as well and waved his hand. “Physical exercise does not a soldier make. You saw her at the range. How the fuck did she make it out of boot?”

“Mag, it’s only been a few weeks. Give her a break,” Roberts tried to soothe him.

It wasn’t taking. He was still too furious. What if they’d been on a live exercise?

“I can’t. I wouldn’t let the guys get away with that shit. No fucking way am I giving the wannabe warrior a break. She’ll do it my way or I’ll kick her ass back to Daddy’s. We’re supposed to take her on fucking missions for chrissake.” He shook his head. “She’s going to get someone killed.”

“We have a month before we hea—”

Mag glared at Roberts. Without another word he entered the building, trying to forget the woman doing pushups in the yard.

Trouble with a capital T is what that one is.

Mag led Roberts to his office. “We need to go over the training schedule. I want us tight before we head into Sri Lanka. We’ll have to compensate for Patterson.”

“I don’t think you’re giving her enough credit. She made it through boot camp. Not even her dad’s rank would get her through that.”

“So she has guts, but can she really cut it?” Mag worried his lip with his teeth.

These soldiers were his responsibility and their families trusted him to bring them home alive, if a little dinged up.

“We have training time. Push her to the limit. You know the General isn’t going to take her off the team. We work with what we’ve got. That’s all we can do. Remember, this is a peacekeeping mission. If we do it right, a shot won’t even be fired.”

“Well, listen to you, the voice of reason. Fuck, Roberts. When did you get so smart?” Mag asked with a smile, letting the other man know he was teasing. He was finally cooling down a little. That’s why Roberts was his right-hand man. He wouldn’t want to go into a fight without him.

“Never mind that, I thought you had a training schedule you wanted to go over.”

Mag pulled up the chart on his computer and got to work.

This was my first read by JJJ (I finally popped my cherry) and man am I kicking myself for taking so long! lol I really enjoyed this book. There was mystery, hot guys, intrigue, hot guys, smoking...

There is tension, growing love, and the “Who the heck IS this guy?” scenario throughout. A highly enjoyable romance that lets you know there are more in the series due to the well-displayed sub cha...

Share what you thought about Magnus and earn reward points.

Other books in the Semper Fi seriesView Series Page