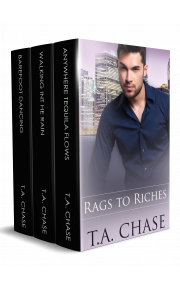 Sidney Richardson has watched his two best friends fall in love, leaving him to wonder if he’ll ever find the right man for him. Sure, he’s been playing the field since he discovered sex, but he’s never taken a chance on one of those one-night stands to see if there might be more. Now he’s ready, but is the man he’s waiting on ready as well?

Tito Perez has had a rough go of it, but he’s finally in a good place in his life. He’s got a great job and a group of marvellous friends. Who cares that he doesn’t have that one special guy in his life? Some people just aren’t meant to fall in love.

Then a chance meeting between boss and employee gives Sidney and Tito an opportunity to put their hopes and dreams into action. Will love flow as easily as the tequila Tito pours?

Walking in the Rain

Sometimes fate brings us the right person to make our world perfect.

Dayton VanHooren is a United States senator who doesn’t really like his job. He’s been too busy to date, much less pick anyone up for sex. Being openly gay means he doesn’t have to worry about scandal, but he’s looking for something more than a good time.

Mickey O’Leary can barely think, he’s so exhausted. Working three jobs to help pay his brother’s hospital bills keeps him going and helps him forget about how lonely he is. Mickey would like to meet a nice guy who won’t run at the first hint of Mickey’s problems.

A wedding reception and a thunderstorm are catalysts to bring these two men together. What can they do when they discover the perfect man for them but fall in love?

A moment in time can be the most pivotal one in our lives.

Kendall VanHooren is happy with his life. He works as a corporate lawyer in his father’s firm and does as he wishes on the weekends. He used to be a partier, but as he’s matured, he’s settled down and figured out that sometimes quiet is a good thing.

George Bowie is working a minimum wage job, which is barely keeping him off the streets most days. He lost his job in the banking crisis and has learned the hard way that pride has no place when it comes to survival.

Dancing barefoot on the beach might seem an odd thing to do, but it brings two men together at just the right moment for their worlds to collide.

The chant filled the air at the wedding reception of Adrien Bellamy and Ion Vasile. Sidney, Adrien’s best man, laughed with the rest of the guests when Adrien wrapped his arms around Ion before dipping him to place a kiss on his husband’s mouth.

Shaking his head and smiling, Sidney approached one of the bars. He’d never had so much fun at a wedding before, but seeing how much Adrien and Ion were enjoying theirs made Sidney happy. He found a spot at the oak bar top.

“I need a shot of Patrón and a Stella Artois,” he said before looking up to meet the gaze of the bartender. Astonishment dashed through him when he saw Tito, his employee from Wander, staring back at him. “What the hell are you doing here?” he asked.

Tito frowned while he got Sidney’s drinks. “I’m pouring liquor for rich SOBs,” he muttered.

As much as Sidney didn’t like Tito’s tone, he had to admit the man had a point. A majority of the guests were rich and quite a few of them were arseholes.

“I can see that, but what are you doing here?” He gestured to include the entire backyard of the Bellamy’s Hampton estate.

“Mr Gaverson asked if I’d like to earn some extra cash. I wasn’t on the schedule at the club, so I told him I’d bartend.” Tito set the shot and the beer in front of Sidney. “Not my usual thing, but every little bit helps.”

“True.” Sidney pulled out his money then stuck a five-dollar bill in the tip jar. “Thanks,” he said, stuffing his clip back in his pocket before grabbing his drinks to leave.

As he wound his way through the crowd, Sidney could see why this wouldn’t be Tito’s usual thing. A society wedding full of rich blue bloods dressed in designer clothes while drinking thousand dollar champagne really wasn’t a place where a guy like Tito hung out.

Sidney dropped into his chair at the head table. He slammed back the tequila, hissing as it burned on the way down. He swore under his breath.

“Are you all right?” Winston asked, a hint of concern in his voice.

“I’m fine. Did Patrick tell you he was getting my bartender to pour drinks?”

Winston blinked at the rather odd question. “Your bartender?”

“Yes. Tito from my club.” Sidney pointed in Tito’s direction.

His friend glanced over at the man then chuckled. “I didn’t recognise him. I’m not sure the outfit suits him.”

Sidney silently agreed with Winston. The long-sleeved white dress shirt Tito wore hugged those broad shoulders, hinting at the muscle hidden under the fabric. But the shirt also hid all those marvellous tattoos Tito had decorating his upper body. Sidney didn’t know if Tito had any on his legs, having never seen the man completely naked.

There were times when Tito would wear a leather vest while working at Wander and it was then that Sidney had found himself wondering what other art Tito had. Of course, Sidney would never let on to anyone how just the sight of Tito’s body modifications got him hard. No one needed to know how often Sidney jerked off to the fantasy of running his tongue over every tattoo while playing with Tito’s gold nipple rings.

Tito glanced in his direction as though he knew Sidney was thinking about him. Sidney looked away, hoping the distance between them was enough to keep Tito from seeing the lust Sidney knew had to be shining in his eyes.

Winston laughed softly beside him. “Why don’t you just admit you want the man?”

“Admitting it isn’t the problem,” he confessed.

“Then what is the problem? You want him and if I’m reading the signals right, he certainly wouldn’t mind spending time with you.” Winston sipped his club soda while staring at Sidney, obviously waiting for an answer.

“He works for me, Winston. I don’t want to take advantage of his needing the job.” He didn’t want to tell all of Tito’s secrets, but felt he needed to explain a little more. “He did time in prison. Served his full sentence, but he had a difficult time finding employment because of his record. I’d never want to make a move and have him feel like he had to sleep with me to keep his job.”

“Hmm… I can see your dilemma. Maybe if you talk to him about it, you can convince him that his job isn’t contingent on him fucking the boss.”

It always came as a shock when his friend swore in his crisp, upper crust British accent. Sidney shook his head. He didn’t want to discuss his non-existent relationship with Tito.

Share what you thought about Rags to Riches: Part Two Box Set and earn reward points.