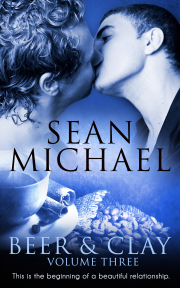 Christian needs what Peter has to give him, but will he let himself have it?

With Toby’s stalker behind bars, Damon and Toby can relax and enjoy their relationship, sinking into basking and reveling in each other.

Things are just heating up for Peter and Christian, though. A former soldier, Christian still hasn’t found his subspace and he’s worried it either doesn’t exist or he’s simply doing it wrong. Peter has as much patience as he needs, though, and he slowly pushes Christian to the edges of his limits, doing everything he can to help Christian grow and flourish.

Christian’s training and the café they’re opening create good excuses for Christian to keep from submitting, even though, deep down, it’s what he really wants. Peter’s perseverance will have to work overtime to overcome them.

Will Christian ever give in to the things he knows he needs? Only time will tell.

Find out how it all began for Peter and Christian.

Before Toby met Damon, Peter and Christian found each other on the internet.

Luckily for Christian, seasoned Dom Peter recognizes Christian’s lack of experience and a kindred spirit in the man, and they take their conversations to text messages and Skype calls.

After Christian’s last deployment and only a few months before his discharge, he takes leave and visits Peter so the two men can see if they are as compatible in person as they seem to be online.

This is the beginning of a beautiful relationship.

“Goodnight!” Peter waved to Damon and Toby, and put his hand on the small of Christian’s back. “Come on. Home. I promised you a spanking tonight.”

While it had been good, celebrating the capture of Toby’s stalker with their friends, nice to spend the evening somewhere not the café or the bar, at the same time he was excited about the spanking. It had been far too long since they’d had one and it had turned Christian on when he’d talked about it earlier.

Not that his boy would ever admit that.

“I think we’ll do it in the bedroom, with you over my knees.” That made it more personal.

Christian shook his head, but didn’t speak. Peter loved the way Christian’s cheeks heated, the shivers he got.

Stroking Christian’s back, he led them up the stairs. “My palm is itching and I can almost feel your ass against it. Feel the heat of it as I warm your skin.” He slowed their pace, wanting the anticipation to last. “You remember what it’s like? Wearing my handprints on your ass? You felt it for days last time.” It had been hot. He wanted it to be even hotter this time.

Between the excitement of Toby’s stalker showing up, gun in hand, and the fact that they were opening the café the day after tomorrow, Peter knew Christian needed the grounding, the pure physical sensation.

The hint of humiliation made his boy excited too, the vulnerability of being over his lap. Peter thought that worked better even than having Christian bent over the bench for scenes. Perhaps he’d have to try focusing on that even when using a flogger or whip or paddle to work Christian over. If not over his knees, then Christian on his knees, bent in front of him. Oh yes, that idea had promise.

He was smiling as he opened the door to let them into their home.

“I am. You make me happy.” Peter couldn’t remember a time he’d been happier, really.

Peter stopped them where they were to turn and face Christian fully, his hand sliding along his boy’s cheek. “I hope the feeling is mutual?”

“I’m learning to be me, I think. Sometimes it’s work, but yeah. I need you, even when I’m not happy.”

Peter put his hand behind Christian’s head, bringing their lips together. The kiss was soft, but thorough, an extension of the words they’d shared.

When their lips parted, he pressed their foreheads together, spending a moment breathing with his boy. He’d discovered that it was the best way to get Christian into the right mind-frame, and right there with him, even when he hadn’t made a point of asking Christian to do so.

Christian’s manic excitement after the attack had faded, had left his lover willing to breathe, to rest with him. Now they would build excitement of another kind together.

Giving Christian another soft kiss, he took his boy’s hand and led them to the bedroom. His own cock was beginning to swell, anticipation ramping him up in the best way.

Christian spoke before they got there. “This isn’t a punishment or a lesson.” And that wasn’t a question.

“No, this is for our pleasure. Your ass, my hand and both our cocks will be very happy with it.” And just maybe he’d get Christian closer to his subspace.

Christian took a sudden, fierce kiss. Peter opened, letting Christian in, letting his boy lead for about ten seconds. Then he groaned and took control of the kiss, first sucking on Christian’s tongue then using his to fuck his boy’s mouth. Christian’s body molded to his, cock stiff in his jeans, muscles tight.

Peter kind of loved that Christian didn’t submit easily. It made every time he did far more rewarding. Likely for both of them.

He finally let their mouths part and they continued on their way to the bedroom, his fingers twined with Christian’s. He didn’t have to pull. His boy wanted this, needed it, and wasn’t dragging behind at all.

“Clothes first. We’re doing this naked, skin on skin.” Peter tugged Christian’s T-shirt out of his jeans and dragged it slowly upward, fingers sliding along as much flesh as possible.

Peter lounged against a column in the airport, near the doors where the arrivals spilled out. He was going for casual, although he was anything but. Christian, the man he’d been having a relationship with via email, text and Skype, was on leave and coming for a visit. It wasn’t something that happened every day. Or ever, in Peter’s experience.

He took a breath, calming the nerves in his belly. It was nine parts excitement and one part nervousness. He was totally looking forward to finally meeting Christian in person and seeing if they were as compatible as they seemed. The nervousness was mostly worry—what if Christian changed his mind? What if he chickened out? Peter shook his head. That last one was not going to happen. To chicken out would go against everything Christian saw as important. That much Peter knew about the man.

He glanced at his watch. Christian’s flight had landed nearly fifteen minutes ago. Even allowing time for the plane to taxi from the runway to the gate, Christian should be coming along soon. Peter focused back on the people streaming from the doors. He found himself admiring a huge, broad-shouldered man, eyes dragging over the tiny tight hips encased in paper-thin jeans, the obviously ridged six-pack under a simple white T-shirt. If he wasn’t waiting for someone, he could tap that, no question.

His gaze dragged back up to the stud’s face and his eyes widened in delighted surprise. It was Christian. He’d only ever seen Christian’s face and shoulders via Skype, never this delicious body. Smiling widely, he straightened from the column and offered a brief wave as he slowly made his way forward.

Christian nodded once, cheeks going the barest bit pink as he gave Peter a once-over. Peter walked slowly toward Christian, letting the guy look his fill. He knew those cheeks were going to go much darker when he gave Christian a big hug. He would refrain from the hello kiss he’d been planning, though, not so much because it would be pushing Christian’s boundaries, than because he wasn’t sure he’d be able to stop all that easily once he started. Online, Christian had called to him, Peter’s instincts shouting at him that he was just what Christian needed and vice versa. In person, that call was a thousand times stronger and his entire body was on high alert, ready to jump Christian’s bones.

Christian held out hand out as Peter got closer. “Mr. Titus, I’m Sergeant Bradshaw. It’s nice to meet you.”

Peter shook his head, ducked the hand and went in for the hug, wrapping his arms around Christian and holding on tight for a moment. Christian stilled like a startled dog, then relaxed into the embrace. It was more than Peter had expected, and he patted Christian’s back gently before stepping away. “I think we’re on a first name basis by now, don’t you, Christian?”

“I suppose we probably are, sir. Habit, I guess.”

More nerves than habit, was Pete’s guess, but he understood.

“Well, Peter or ‘Sir’ will do, okay?” He started moving them forward, the baggage claim and parking area in the same general direction. “Do you have any checked bags?”

Peter knew the ‘sir’ was more what Christian was used to than a sub addressing his Dom, but the word still felt right, felt good to hear, and it made him smile. “We’ll go right to the car, then. I know they don’t feed you on planes anymore. Did you want to stop somewhere for a bite?” He was very proud of himself, for making the offer instead of simply taking Christian home and slamming him up against the nearest wall. The anticipation would serve to make everything sweeter, anyway.

“I could eat, absolutely, and before you ask, I’m a soldier. I eat anything.”

“Yes, but you’re a soldier who’s been deployed a long time. No Middle Eastern food?” he asked. He could imagine that Christian might be craving good old American meals.

Christian snorted, but the sound wasn’t mean at all. “How about a burger?”

“That sounds totally doable. There’s a burger joint just a few minutes from the airport. We can stop there.” And World of Burgers didn’t sell much more than burgers, but they did them in a huge variety of ways, from choice on buns and meat to any topping combination you could dream up. Peter had seen some of the weirdest things on burgers thanks to them.

“Works for me.” Christian looked around, eyes searching constantly.

I loved this book. This was fast paced and H.O.T. Yes Christian was hesitant and Peter was a little bit pushy but I think it worked for this couple and I simply loved them. I can’t wait to go back...

The two are a great couple and work well together...The love and trust that develops between the two men is a sweet thing to see. I enjoyed seeing Christian and Peter find their way towards a happy...

Share what you thought about Beer and Clay: Vol 3 PRINT and earn reward points.