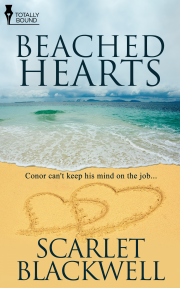 Lightning can’t strike twice for unlucky-in-love Conor, can it?

Local chief of police Conor Kelly has a major headache when a U.S. film crew arrive to record the autopsy of a beached whale in the picturesque seaside town of Kinroe, West Ireland.
It’s seven years since Conor was dumped by marine biologist Liam and he’s been alone ever since.

Now lightning might strike twice when head of the project Eli Sanders makes his admiration for Conor plain. Conor tries to ignore his attentions. He nearly lost his family to his first homosexual experience and isn't willing to risk it all a second time, no matter how much Eli has captured his imagination, but Eli’s not playing games. He wants Conor and he’ll do whatever it takes to show him he’s serious.

Eli enchants him, seduces him and soon Conor can't keep his mind on the job…

Publisher's note: This book was previously published elsewhere. It has been revised and re-edited for release with Totally Bound Publishing.

“They arrived last night. There’s about ten of them, led by this one bloke from California who’s apparently the world’s biggest expert on whale anatomy,” John Doyle told Conor Kelly as they sat in their patrol car drinking coffee and surveying the empty beach. It was barely light, wind and rain lashing the sea into foamy peaks, the dark shape of a whale covered by tarpaulins visible against the pale sand.

Conor didn’t reply. John knew better than to expect much out of him so early in the morning.

The sleepy West Ireland village of Kinroe lay on the coast, twenty miles from Galway City, overlooking the bay. It had become famous over the last two days after a blue whale had become beached on its shores. After forty-eight hours of desperate work by the emergency services and marine conservation groups from all over Ireland, the animal had died before they had been able to get it back into the water. This had left Conor, local Garda Inspector, with a major headache—disposal of the body. A mere eight hours later, the mayor had called him into a meeting and told him an American nature channel wished to send a team to conduct a post-mortem on the whale and film it as a documentary.

“It’ll be good for tourism,” John, his sergeant, had pointed out after the meeting. He was a tall, thin man with carroty hair and a freckled face. There was no one in Ireland who looked more Irish than John.

“I don’t care about the tourism,” Conor had snapped. “Didn’t that animal suffer enough without turning its death into a spectacle? Christ, people are going to come from all over Ireland to watch its guts being spilled on the beach.”

John had been silent. Conor had reddened a little at venting his feelings so publicly. At the frontline of the rescue attempt, he’d hardly slept in two days, and when the whale had died, it had just about broken his heart. He saw himself as a quiet, taciturn man, slow to impulsiveness. It took a lot to upset him and even more to move him, but this creature had. The idea of watching it being cut open was more than he could bear.

“It’s too big to move,” John had offered.

Conor sank into a chair. “This is all bullshit.”

“Policing it will be a nightmare. I don’t want to do it. I’m too fucking tired.” His own words had amazed him. Conor rarely complained about anything. He got on with his job to the best of his ability, and because of that, he was sure he was a respected man in town.

Conor hadn’t said anything else after that. He had spoken more after that meeting than he did sometimes in a whole day, and now he was done. He had nothing else to say. He would just plod on like he always did.

He wore a heavy regulation jacket this morning over his uniform and boots, a beanie hat pulled down over his ears. Despite the car’s heater, he was still chilled. He wasn’t relishing standing around on the beach all day keeping ghouls away from the body. The mood he was in, he would arrest anyone who showed a hint of causing a disturbance.

“They said they’d be here at eight,” John said. “Guess they had a lie-in.”

Conor scowled. That was further negative points against them. He wasn’t sure how he was going to bring himself to be civil to these butchers. He’d hardly slept again for working himself up into a lather at the scenario to come, and his head ached fiercely.

Headlights suddenly illuminated the car, and a four by four swept past them, driving towards the whale. Conor tensed, because if this was an unauthorised person, he’d have something to say about it.

He climbed from the car and slammed the door before setting off across the sand to where the vehicle had pulled up.

Four people got out, three turning to face him, one starting towards the whale, clearly oblivious to his presence.

“Hi there, you must be the police.” A balding man stepped forward, holding his hand out. “Pierce Adams, Wrigley Institute for Environmental Studies, University of Southern California.”

The two of them shook hands with the two men and one woman while Conor’s gaze strayed to the man who appeared to be running his hands down the side of the whale and talking to it.

Conor walked off in the middle of his inventory. He approached the man in the blue parka. “You in charge of this farce?”

The man turned around, eyebrows raised at Conor’s abrupt tone. A shade under six feet, slightly shorter than Conor with a lean body, he was pale in the wan morning light with short, dark brown hair and impossibly dark eyes—probably a trick of the light. He looked about thirty-five, and the muddy light did nothing to disguise how attractive he was.

Share what you thought about Beached Hearts and earn reward points.