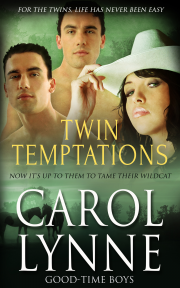 Book 4 in the Good-Time Boys series

For twins Ryker and Ranger Good, life has never been easy. Kicked out of the house when they were barely eighteen, the brothers started a new life together. Now in their thirties they are ready to make a commitment, not only to each other but to the woman they've waited to claim for four years.

Lilly Bevin has been in love with the Good twins for years, only to be treated like a child by them. Now twenty-one, Lilly's ready to spread her wings. Working in the town bar is just one of the ways she's declaring her independence, dating is the other.

When the twins find out the woman they want is dating a smarmy hustler they try to talk some sense into her, only to be told to butt out. Now it's up to them to tame their wildcat and bring her into the fold of their love. A wildcat however, has claws and Lilly isn't shy about using hers to her advantage.

Reader Advisory: This book contains a twincest storyline, sexual intimacy between twins, and may be offensive to some readers. This is a TABOO story.

Publisher's Note: This book is best read in sequence as part of a series. This book was previously released under the same title. It has been re-edited for re-release with Pride Publishing.

Ranger leaned back and put his boots up on the old scarred desk. “I think it’s great that you’ve decided to run for Mayor, but I’ve no interest in running for the City Council.”

“Just give me a chance to talk you into it. You’re an excellent businessman, and it’s time for a change. The Council has been stagnant for too long,” Rawley said, pleading his case.

“Sorry, brother. Still not interested. Running the feed-lot is about as public as I ever care to be.” A sudden feeling had him sitting up and looking out the window. “Sorry, but I need to go. I think something’s happened to Ryker.” Ranger didn’t give Rawley a chance to answer before he was heading out the door.

He ran to the northwest lot and scanned the area. “Bub?”

Turning his attention to the large group of cattle, he spotted Ryker limping toward him. Jumping over the fence Ranger ran toward him, pushing cattle out of the way in his haste. “What happened?” he asked, as wrapped an arm around his brother’s torso.

“Stupidity is what happened. I knew to be wary of number three-twenty-nine, but I dropped my guard, and the damn cow kicked me.” Ryker leaned on him as they walked out of the muddy lot.

As soon as they cleared the fence, Ranger stopped and knelt in front of Ryker. “Where exactly did she get you?”

“Mid-thigh, but if you think I’m gonna pull my jeans down out here where anyone can see you’re nuts. Help me get to the office. I’m sure it’s probably just a bruise.”

Ranger helped him to the office and sat him on the cracked avocado green vinyl couch. It said a lot about their relationship that Ryker hadn’t had to ask how Ranger knew he’d been hurt. They’d just always been that way.

Undoing, Bub’s jeans, he looked up and winked. “If you really wanted to flash me this morning all you had to do was say so.”

“Smart ass,” Ryker said lifting enough to push his Wrangler’s down to his ankles.

“Woo-wee, that’s some bruise you’ve got started there,” Ranger said, as he looked at the swollen area on Bub’s upper thigh. “A little higher and you’d have been out of commission for a long time.” Despite his humour, Ranger hated to see Bub in pain and leaned over to kiss the hot, raised area. It looked to be about six or seven inch diameter of hurt. He was sure the bruise would spread well beyond that, but this is where the pain would be focused. “Let me get some salve out of the medicine cabinet.”

Ranger went to the bathroom nestled between his office and Bub’s. Running a washcloth under the cold water he rung it out and grabbed the salve. He caught Bub clenching his jaws when he returned, a sure sign he was in pain but didn’t want to show it.

Kneeling, he placed the cool cloth over the angry red welt. “Do you think you should go for an x-ray?”

“Yeah, well do you remember Curtis Eben? He got kicked in the shin by that horse and ended up having a stroke when a blood clot made its way to his brain.”

Bub rolled his eyes. “I promise not to have a stroke, okay? Just put the damn salve on it. I’ll be okay until I can get home and ice it.”

“Stubborn mule,” Ranger mumbled under his breath. He removed the compress and opened the tin of salve. Dipping his fingers in, he scooped up a generous portion and began lightly rubbing it on the raised area. After wiping his hands, he wrapped his arms around Ryker’s waist and just held him. Just the thought of something happening to Bub had him shaking.

“Hey, guys, Momma asked me to drop these...” Ranger’s head whipped around toward the door. Lilly was standing with what appeared to be a box full of yellow sweet corn. “Fuck,” he said, going still. “Don’t you know how to knock?”

Lilly bit her lip and even from across the room, Ranger could see the tears in her jade green eyes. He hadn’t meant to growl so harshly, but shit, it was Lilly. Dropping the box at her feet, Lilly turned and walked back out the door without a word. Ranger closed his eyes and rested his forehead against Bub’s chest. Most people were sickened by any display of physical affection between the brothers and they knew it. It was exactly the reason they’d built a house back in the woods of their family’s ranch. There, they could hold each other and kiss on occasion and no one cared.

“I want her,” Ryker said, as he closed his eyes and threaded his fingers through Ranger’s hair.

Resting his head on Bub’s chest he sighed. “I know, Bubba, I want her too, but it’s still too soon. She’s just not ready for what we have in mind.”

“How much longer? We’ve waited damn near four years for her to grow up. She’s twenty-one now, don’t you think she’s old enough to make up her mind? What if she gets snatched away from us?”

Ranger looked at the spilled box of corn. “You know one of us is gonna have to go talk to her about what she walked in on. I’d say it should be me. You’d just melt at the first sign of tears. Besides, I’m the one who yelled at her. It should be me that apologises.”

“Tonight, after the lot closes. I’ll drop you by home and then come back to town.” Ranger released his hold on Ryker and sat back.

“That plan doesn’t make sense. Why don’t we both go into town and you can drop me off at the diner. I’ll get us a couple plates of chicken fried steak to-go while you talk to her.” Ryker reached for his jeans.

“How’s the leg?” Ranger asked when he saw Ryker flinch.

“Sorer than a motherfucker, but it’s my own damn fault.”

Helping him stand, Ranger pulled Ryker’s jeans up. “We’ll get it iced tonight and put some more salve on it.”

Slipping on his boots, Ryker sat back on the couch while he tied them for him. “You think we disgusted her?”

“Lilly? Hell no. I think she probably would have joined in if we’d invited her. Naw, I think she was just surprised and got her feelings hurt when I snapped at her. It’ll be okay.” He stood and kissed Ryker. His brother was the sensitive one of the two of them, and always had been.

Dipping his tongue into the dimple on Ryker’s left cheek, he grinned. “Thanks for the mid-morning snuggle, but I think it’s time we both got back to work. Why don’t you take over manning the phones and I’ll go out and make sure everyone’s still got some work to do.”

With his leg propped up on a chair from the entry way, Ryker made a few phone calls. He ordered feed and arranged for some of the cattle to be shipped out to the county auction the following week. Now, with his head rested on the high back of his desk chair he thought of Lilly.

His fascination with her had started the summer before her senior year. He’d felt like a dirty old man, but the look in her eyes when she had caught him and Ranger kissing in the feed barn, had caused an ache that had yet to go away. He wanted to go after her when she’d turned eighteen and graduated from school, but Ranger would have none of it. He’d explained that Lilly was the perfect woman to let into their lives for the long-haul, not just a quick affair. In order to assure

she’d be ready to commit, they needed to give her time to grow-up and experience a little bit of life.

“Yeah, right,” Ryker said to the empty office. The evening Nate had teased Ranger about Lilly hooking up with one of the bar patrons had almost killed him when Ranger told him about it. Ranger had to talk him out of going to the Dead Zone and carrying that little five foot five woman out over his shoulder. Just the thought of one of those sweaty cowboys putting their hands on Lilly had him seeing red.

By the time Ranger came back in at the end of the day, Ryker had worked himself up pretty good.

“Yep. I think I need to go with you to the Zone.” He adjusted his hat and locked the front door.

“What brought this on? I thought you were going to get our dinner?” Ranger got into the quad-cab pickup.

“I’ve been thinking. I don’t like the idea of Lilly working in that place. I think we should talk to her about it.” He buckled his seatbelt, refusing to look at his brother. He knew what he’d see anyway. “And stop rolling your eyes at me.”

“Geez, Bub, you can’t just walk in and start demanding stuff of her. You’ll scare her all the way to Kansas City. Why don’t you let me handle it?”

“Fine, just make sure she understands that she shouldn’t be working in a bar. She’s better than that.”

Ranger unbuckled and leaned over to give him a kiss on the neck. “You’re so damn cute when you get all protective and shit.”

Carol Lynn has conquered both twincest and a MMF ménage perfectly. I loved this story. It is full of emotions and the relationship did not start out perfect. There was the jealousy and hard feel...

Share what you thought about Twin Temptations and earn reward points.