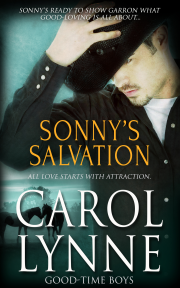 Book 1 in the Good-Time Boys series

Sonny Good loved his life as an FBI agent, but when his father died and he was needed back home he quit the agency and became a rancher. Now several years later, Summerville, Nebraska is starting to seem a little isolated. An openly gay rancher in the middle of Nebraska just doesn't have many prospective dates.

That is until Garron Greeley moves to town. Garron is the town's newest resident and bad boy bartender with shoulder-length dark brown hair and tribal tattoos. Sonny is struck by lust at first sight. Things between the two of them take off like a rocket until Sonny learns Garron is also the brother of the man who owns the neighbouring ranch. The man Sonny considers his enemy, which leaves Sonny to decide what's more important—the feud with his neighbour or a potentially blazing passion with Garron?

Publisher's Note: This book was previously released by Totally Bound Publishing under the same title. It has been re-edited for re-release.

Sonny Good hung up the phone cussing a blue streak. His older brother, and town Sheriff, raised his eyebrows as he walked into the kitchen. “What’s got you so fired up this morning?” Rawley Good took a mug out of the cabinet and poured a strong cup of coffee.

“That new guy next door’s bull got into our pasture last night. Shelby thinks he might have bred some of my Angus.” Sonny sat back down at the kitchen table and took another gulp of his coffee, the burn going down his throat was just what he needed. “I tell ya. That city boy doesn’t deserve a ranch. Why Jack decided to sell it to him and not me is beyond reason. I bet the guy’s never even seen a cow before last week.”

Rawley chuckled. “Jack always had a reason for everything he ever did. I bet we’ll figure it out eventually. Didn’t you say Jack told you he met the city fella when he went to Chicago for the cattle convention? Maybe he saw somethin’ in him that made Jack think he’d make a good rancher. It’s only been a week. Cut the poor guy some slack. Maybe if you tried helping him instead of always criticizing he’d turn into a damn fine rancher.” Rawley rocked back in his chair, tipping it back onto two legs. Sonny gave him the look. Their momma would have killed Rawley for doing that had she still been there.

Taking his empty cup to the sink, Sonny ran water over it and set it in the dish drainer. “I think I’ll just ride the city fella out. Let him screw up so bad he’s forced to sell the ranch to me.” He took his battered straw cowboy hat off the hook by the door and adjusted it on his head. “Will you be home for supper?”

Setting his chair on all four legs, Rawley shook his head. “I’ve got a date with Meg. I probably won’t be home at all. I’ll just pack an extra uniform in the cruiser.”

Sonny started to turn around and stopped. “When are you gonna just admit you’re gay and stop stringing that poor girl along? It’s been almost two years, if it hasn’t happened by now, it’s not gonna.”

Rawley shook his head as he put his cup on the dish drainer. “I’m not gay. Three gay Goods are enough. I’ve had my share of fights with some of the people in this town. I’m not interested in another. Besides, how long do you think it would take this community to run off a gay Sheriff? And for the record, Meg and I are perfectly happy.” Rawley took his Stetson off the peg by the door. “Now that I’ve told you my personal business, don’t bring it up again.” Rawley shoved past Sonny and walked to the brown and tan sheriff’s SUV.

Shaking his head, Sonny strode toward the barn hollering for his ranch hand. “Shelby. Let’s get that fence fixed.”

This is a very good story. The romance was good and the sex very hot.

Share what you thought about Sonny's Salvation and earn reward points.