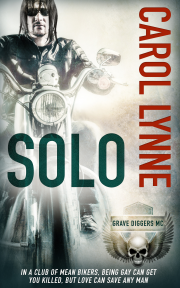 In a club of mean bikers, being gay can get you killed, but love can save any man.

Sam ‘Solo’ Braun lives by one truth, the Grave Diggers Motorcycle Club, above all. The creed has served him well, giving him the only real family he’s ever known. He would die for his brothers and them for him, but they don’t know he prefers men over women. Coming out to a group of men who fear no one isn’t high on Solo’s priority list, especially because he’s never indulged in more than one-night stands.

Everything changes after one night with Eric James. For the first time, Solo can’t stop thinking about a single night he’d spent with a man. When fate intervenes, Solo comes face-to-face with his blue-eyed obsession, only to find out Eric is a cop. Solo hates cops, and so do his brothers in the club. However, Solo decides to gamble everything and spend more time with Eric under the guise of getting information.

Falling in love with a cop is a very dangerous proposition for a man in Solo’s position, so why can’t he walk away?

Sam ‘Solo’ Braun leaned against the bar at Lucky’s and stared at the candy store laid out in front of him. He didn’t fit in with the rest of the patrons, which made him stick out in a good way. Men who were interested in sweet words, long walks or cuddling didn’t give him the time of day. Nope, those sweater-wearing assholes looked at a man like him for just one reason, they wanted to be fucked and fucked hard. Letting some corporate do-gooder ride his pole for an hour or so was all he was after, and he rarely had to wait long before the one he chose approached him.

Case in point… Solo had spotted the black-haired, light blue-eyed piece of ass the moment he’d walked in. Whoever the hell he was, Solo had never seen him in Lucky’s before. He would have remembered. Shit, the bastard making his cock hard was a snack wrapped in a package of snug blue jeans and a black T-shirt.

Those fucking eyes. He shook his head. He’d never seen anything like them. Light blue wasn’t quite the right word to describe them—they were the color of soft faded denim. Yeah, that’s exactly what color they were. Living the life he did, he decided right then that he didn’t give a shit what uptight name the sweet little package had been given because as far as he was concerned, his evening’s entertainment was named Blue.

Solo lifted his beer to his lips, but kept his gaze on the prize. He didn’t approach guys, ever. All he had to do was watch them until they eventually realized they had eyes on them and turned to find out who was staring.

Blue threw his head back and laughed at something his friend said, flashing a twin set of fuck-me dimples.

For a brief moment, Solo considered giving the guy a ride on his cock more than once just to see those dimples again. “Christ,” he groaned.

Before Solo could get too far into thinking once might not be enough, Blue pushed back his chair and stood. He grabbed the empty pitcher on the table and turned toward the bar.

Solo knew the moment Blue spotted him. One minute he had a grin on his face, and the next he’d stopped dead and met Solo’s gaze, his smile falling away in an instant. Solo continued to wait.

Blue set the empty pitcher on the bar. “Another one, please,” he told the bartender as he dug out his wallet. He glanced at Solo three times before eventually speaking. “Hey.”

Solo dipped his chin in reply.

Solo shrugged and finally gave in to his needs. “There could be a thousand men in here, and I’d still have seen you.”

Blue’s cheeks flushed as he handed the bartender a twenty. “You wanna dance?”

Solo shook his head. Instead, he pushed out the stool beside him with his booted foot. “I don’t dance.”

Blue bit his bottom lip and glanced over his shoulder at his friends. “Would you wait for me to take this to the table and hit the restroom first?”

“Fair enough.” Solo watched Blue go. He could always follow him and take care of business in there, but he wanted a closer look at those damn eyes, and the lighting above the urinals was all kinds of bullshit. No, he’d wait until he’d gotten his fill of Blue’s eyes before fucking him.

Eric James stared at his reflection in the mirror as he washed his hands. “What the hell are you thinking, James?” he asked himself. A man like that is trouble and you know it, he continued silently.

“Fuck!” he spat, knowing he was going back to the bar, regardless of how long he tried to talk himself out of it. Despite his misgivings, the man was too hot, too dangerous, too tattooed not to explore for a few hours. That Goddamn shoulder-length dark brown hair and those wicked brown eyes had attracted him, but that fucking black widow spider tattoo on the side of the guy’s neck had made him hard the moment he’d spotted it.

The door opened, and the biker walked in. “Thought maybe you’d changed your mind,” he grumbled, his voice so low it made Eric’s balls vibrate.

Solo was a great start to an interesting series. I loved watching these men slowly but surely open up to their emotions and to each other. Bit by bit, their reticence and hardened walls crumbled...

Solo lived up to my expectations of everything that should be in a book where the choppers hate the coppers—with an added twist.Ms. Lynne gave us men of hardened hearts, of those who hav...

Share what you thought about Solo and earn reward points.

Even before Tig fell in love with Venus on Sons of Anarchy, I wondered how it would feel to be a gay man in the Alpha world of motorcycle clubs. So, with that in mind, I wrote a love story for such a man. Solo is used to sneaking around to fulfil his body’s desire for other men.