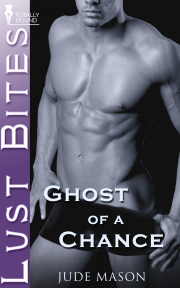 Ghost of a Chance

When a ghost appears in his dreams and gives Robert Haskins the blow job of his life, it also drops him into a forty-year-old mystery that he's determined to solve.

When Robert Haskins moves into an old farm house, he doesn't expect an erotic visit on his first night there, or his second. A handsome ghost, long dead and troubled, gives him amazing oral sex—and a mystery to solve.
He winds up at the local police station where lone cop and heart throb Joe Sanders is more than eager to help him solve the forty-year-old case. Together, they follow the leads. Can the two of them solve a crime that's been dimmed by time? Will the feelings they have for each other last or die? Do they stand a Ghost of a Chance?

Silken softness wrapped around his cock, sucking gently, exquisitely. Robert shifted. Rolling onto his back, he stretched his legs out, barely conscious of being in bed, not really awake. Wet suction pulled at his shaft. A tongue slid over the crown of his cock, the tip delving into the slit. His thighs eased open. Yes, a dream. That’s what it is. A wet dream, a fantasy—a disembodied mouth, tongue, lips, teeth, all there just for his pleasure. The suction eased, the lips barely skimming over his shaft—up and down, up and down. His hips twitched, his buttocks clenched, his thighs tightened. He splayed his knees wider. A tongue moved wetly up his shaft again. The sensation faded. Excitement waned. He fell into deeper sleep. A face appeared—dark hair tousled, thick brows with one arched more then the other, sideburns longer than fashionable. The nose had a bump in the middle. Eyes—brown, wide open, framed with beautifully long lashes—watched him. Lips—thick, moist, kissable—opened. Robert’s hips moved, churned his ass into the bed. Soft sheets brushed against his shaft and its head wept and stuck to the material. He reached for himself. A squeeze, a tug. He sighed and his slumber again deepened. The beautiful, handsome face vanished, but the mouth remained. Lips, tongue, brushed the thick dome of his cock. His balls shifted, moving up closer to his body. He clenched his ass. In sync, his hips rose, pushing his cock shaft further in. Taking his hand off his cock, he reached lower and cupped the soft, nearly hairless sac below. Holding it, he pulled down on the two walnut-sized orbs. He relaxed, his sleep deepened again. Time passed. “You like that, don’t you, my love?” a soft masculine voice whispered huskily. “Yes,” he hissed. Or I thought I did. Am I speaking? Am I dreaming? Does it matter? The slickness of a mouth returned, nipping at the flesh along the length of his cock. His shaft thickened instantly, if it ever actually had deflated at all. He was hard. He wanted to fuck. He dreamed. The face was back. Thick lashes rose, revealing lust-filled, dark eyes looking up at him. The nose, a little too sharp at the tip, brushed his pubes as the mouth descended, taking him in to the hilt. Grunting, he basked in the feel of that lovely, soft, wet mouth engulfing his cock. The head touched, rubbed against the back of a throat. “Yes,” he hissed again. Or is it the first time? He shuddered, reached for the face, connected with...nothing, air, sheets. His fingers slipped over the cool silk fabric, gripped, clenched and held tight while his cock was lavished with gulping pleasure. A chin nudged his ball sac, pushing the magic orbs to and fro. He arched his back, his fingers and toes curled tight, he was aching for release—half-asleep, half-awake, breathless with lust. The face vanished. The mouth abandoned him. Robert sat up. One of his hands rested on the bed behind him, supporting him, the other moved to his stomach. His cock pulsed against his palm. Glancing around, he peered into the corners, along the walls, the window shades drawn tight. He was alone. He was fucking hard, needed to come. He was exhausted. Peering at the clock on the bedside table, he saw the arms pointing at the three and the ten. It wasn’t ten fifteen. Sagging, he fell back on the pillow. Too old for a wet dream, he told himself. Too tired to finish. Still he reached down and cupped himself, sighing. His thoughts wandered to the dream of the face, the mouth, those deep brown, smouldering eyes. He sighed with pleasure. Weird dreams. Fuck me dreams. Where’d they come from? His thoughts faded into nothing. “Open your legs. Let me suck you,” the deep, masculine voice whispered.
Buy Now

Reviewed by Romance at the Heart

Here is another example of Jude Mason at her very best... As with all of Jude's books, it is one you can't miss!

Share what you thought about Ghost of a Chance and earn reward points.