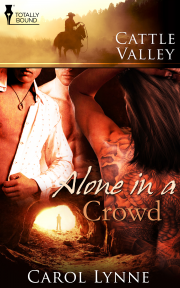 Alone in a Crowd

Book 27 in the Cattle Valley series

For years, Ryan Blackfeather prided himself on maintaining his composure no matter the situation. He has built a life around his desire to be needed, to feel important to those around him. His job as sheriff and the love of his partners, Nate and Rio, not only fulfil him they give him purpose. So why when he receives a phone call with tragic news does their love and support not comfort him?

The more Rio and Nate pressured him to talk about his sudden surly mood, the more Ryan began to resent them. The answer came at the height of a heated argument, it was time to return to the place and the people who first made him feel like he had nothing to offer. Only then would he figure out why he'd spent a lifetime searching for the acceptance of those around him.

Insisting he tackle his past on his own terms, Ryan returns to Oklahoma to face the demon, the one man in the world he could never please.

Reader Advisory: This book is best read in sequence as part of a series, having read the previous story about Ryan, Rio and Nate - All Play and No Work. There is also an inventive sex scene involving food play.

Alone in a Crowd

Sheriff Ryan Blackfeather stood on the small rise and watched his partner, Rio Adega cut down a dead tree. Cleaning up the park was a yearly event that his other partner, Nate Gills, took very seriously. Ryan, on the other hand, took the view of Rio’s ass in a tight pair of jeans serious. He reached down and subtly adjusted his hardening cock.

The park was full of people with good intentions, too bad Ryan couldn’t act on his. He smiled and shook his head. If he went any closer he’d have to arrest himself for indecent exposure. Later, he promised himself.

“You gonna just stand there, or are you going to come down here and help me?” Rio asked.

“I’m on duty.” Ryan pointed to his badge. “This gets me out of manual labour today.”

Rio wiped the sweat from his forehead with the back of his arm. “Funny how that happens, and here I thought you usually took Saturday’s off.”

“Pete wanted off to spend time with Brian and Ethan.” Ryan chuckled. He knew he wasn’t fooling Rio, but it was a good game. “I always put my deputies’ needs before my own.”

“Mmm hmm. Keep telling yourself that.”

“I will.” Ryan spotted a scrap of paper several feet away and walked over to pick it up. “Love you. Don’t work too hard.”

Bent over, his ass facing Ryan, Rio gathered a few of the sawed logs in his arms. “I wouldn’t have to if you weren’t such a dedicated lawman.”

Ryan was still chuckling as he walked off. Despite what Rio believed, he wasn’t afraid of hard work. He simply felt better being in a position where he could watch over the citizens he’d been hired to protect.

Smokey Sharp watched Ezra James and Palmer Wynfield rake the previous fall’s leaves away from the edge of the pond. There was a time when he’d be right there, working alongside Ezra, but that was before Palmer, before he’d made one of the biggest mistakes of his life.

“No time like the present,” Smokey whispered. He took off his cowboy hat and walked closer to the water’s edge. Instead of announcing his presence, he waited. It was immediately obvious that Ezra’s relationship with Palmer agreed with him. Ezra looked younger without the massive beard he’d worn for years, and happier than Smokey had ever seen him.

Several moments later, Ezra glanced up. His initial reaction was a wide smile, but all too soon it was gone, replaced by a scowl. “What’re you doing in town?”

Palmer stopped raking and spun around to face Smokey. It was the moment of fear in Palmer’s eyes that hurt the most. Smokey took a deep breath, praying the words would come out the way he’d rehearsed. “I came back to apologise. To both of you,” he added. “I don’t expect either of you to forgive me, but I’d like to come home to Cattle Valley.”

Before he could say anything more, Palmer dropped his rake and took a step towards Smokey. “You don’t need our permission.” He shook his head. “I’m not as insecure as I used to be.”

“I don’t have any openings on the ranch,” Ezra said, moving to stand beside Palmer.

Smokey looked down at his boots. “I didn’t apologise because I wanted you to give me a job. I guess I just hoped...” He stuffed his hat back onto his head. It was obvious Ezra wasn’t planning to forgive him anytime soon. “Never mind.” He waved to the two men as he turned to leave. “See ya around.”

Smokey slowly walked back to his truck before his legs could give out. He hated himself for believing all could be forgiven. Real life wasn’t like the movies, it wasn’t as simple as apologising to the people you’d wronged. “It was stupid as fuck to come back here,” he mumbled as he climbed behind the wheel and slammed the door.

“You’re the last person I expected to see today.”

Smokey sat up straight and turned to find Sheriff Ryan Blackfeather leaning on his truck. The last time he’d had a run-in with Ryan it was just after he’d made the mistake of threatening Palmer. “Came back to apologise. I’m not looking for trouble.”

Arms crossed, Ryan continued to stare at Smokey. “Did it work?”

Breathing a sigh of relief, Smokey smiled and shook his head. “I doubt it, but at least I’m still alive.”

That was the million-dollar question. “No idea. I lost my job up north when the old man died. His snot-nosed kid came in and sold the whole damn place to a developer. Gonna put up windmill generators. Know of anything around here?”

After several moments, Ryan pulled out his wallet and withdrew a card. “Nate has a friend who just leased three hundred acres from the city to farm.” He handed Smokey the card. “Give him a call. Tell him I referred you.”

“Make no mistake, I didn’t approve of what you did to Wyn, but I know you were a damn good foreman for Ezra.” He gestured to the card. “Give Oggie a call.”

“Thanks.” Smokey started his truck. “See you around, Sheriff.” He waited for Ryan to step back before pulling out of the parking lot. He tossed the card in the seat beside him, more depressed than ever. He’d love to work on a ranch again, but his health was declining rapidly, and it wouldn’t be right to apply for a job based on the kind of foreman he once was.

Smokey drove through town and pulled into the grocery store parking lot. Elliott Simmons was the only loose end he had left on his road to redemption. He couldn’t make people forgive him, but he couldn’t let that stop him from trying.

Elliott had reached out to him after Ezra kicked him off the ranch, had even offered physical comfort to help ease Smokey’s broken heart, and he’d repaid him by drinking himself into oblivion every night. It wasn’t Elliott’s fault. Smokey had always been a drinker. It was only natural for him to crawl into a bottle of whisky and live there for the better part of a year and a half. Unfortunately, Elliott had paid the price.

Smokey got out of the truck and slammed the door harder than needed. He took a deep breath before entering the grocery store and was immediately met by Jeff, Elliott’s teenage son. “Hey.”

“Mr Sharp,” Jeff said in surprise. “I didn’t know you were back in town.”

“Just drove in a few hours ago. Is your dad here?”

“He’s in the back.” Jeff set the box he was holding on the floor. “He missed you, you know?”

Smokey didn’t, as a matter-of-fact, he couldn’t imagine Elliott had given him a second thought after throwing his drunk ass out. “No, but it’s nice to hear.” He took a second look at the growing man in front of him. “I’m sorry if I scared you back then, but I promise I’m sober now.”

“Don’t tell me, tell Dad.” Jeff picked the box up and smiled. “It’s good to see you again.”

“Thanks, you too.” Smokey walked towards the back of the store feeling lighter than he had in a very long time. He entered the storeroom and prayed Elliott would be as kind as the son he’d raised. “Hey.”

Elliott glanced up from his clipboard. “Hey,” he returned, an expression of shock on his dark brown face. He took several steps, putting him directly in front of Smokey. “You’re back.”

Staring down into his old friend’s dark eyes, Smokey realised how much he hated himself for disappointing Elliott. “I came to tell you how sorry I am for what happened between us.”

“Don’t do that. I’m sorry about how it ended, but not all the memories are bad ones.” Elliott reached up and brushed Smokey’s cheek with his hand. “I’ve missed you.”

“I don’t know why you would, but I’ll take it.” Smokey leaned into Elliott’s touch. If only he could go back and live his life over. Maybe he would’ve fallen in love with Elliott before Ezra managed to get under his skin. A lump of regret formed in his throat, prompting him to pull away. “I should probably let you get back to work.”

“You staying in town?”

There were two places to stay in Cattle Valley, the lodge or the B&B, and both were too expensive for Smokey’s limited funds. “I have a lead on a job, but I’m not sure how much help I can offer the guy.” He looked down at his hands. According to the doctor, the rheumatoid arthritis that was quickly crippling him was an inherited disease that could be marginally managed but not cured. As if his mother abandoning him as a child wasn’t enough, he would forever endure a constant reminder of the slut who’d loved men and drugs more than her own son.

Elliott glanced at Smokey’s gnarled fingers. “I think you have more to offer than you give yourself credit for.”

This was a wonderful story about how the acceptance and love of one special person can change many people's lives for the better...I wish there were more places like Cattle Valley where people of a...

Share what you thought about Alone in a Crowd and earn reward points.