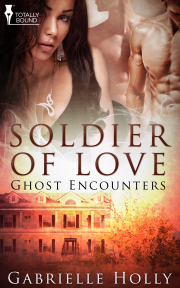 Book 1 in the Ghost Encounters series

When Toni Bianchi decides to chuck her high-stress career and mooching noncommittal boyfriend to become an innkeeper in a tiny tourist town, she doesn't realise that she's trading in one set of problems for another. The inn is a crumbling money pit haunted by the handsome ghost of its former owner—Civil War soldier John Buckman. As the hauntings get more frequent — and much more personal — Toni wonders if she's just imagining things.

At her wit's end, Toni calls in the popular ghost-hunting TV show "Paranormal Research Team" and immediately falls for its sexy star, Thomas Becker. Toni, Thomas and Buckman's ghost engage in an otherworldly ménage that helps the dead cross over and leaves the living wanting more.

Reader Advisory: This book contains one ménage a trois scene.

It was well past sunset and Toni Bianchi stood shivering in the stinging rain, up to her ankles in icy mud, her ridiculous Civil War costume clinging to her curves. She glared at the decrepit pickup truck—its bed made over to look like a mid-nineteenth-century military chow wagon—and wondered at exactly which moment her life plan had gone astray.

Admittedly, her 'life plan' was a bit fluid. Toni had always believed that spontaneity made life—and her—more interesting. But, as her wet curls clung to her neck and her toes grew numb, she was beginning to rethink her philosophy.

"Impulsive," she muttered to no one. She'd had yet another knee-jerk reaction. This time, as a result, she'd found herself ankle-deep in unfamiliar muck.

Toni's ability to think on her feet and execute snap decisions had made her successful at managing luxury hotels. She'd become something of a legend in the business for her ability to pull together grand-scale events in record time. She could simultaneously shuffle appointments, juggle contractors and sweet-talk caterers. The exhilaration of a looming deadline became an addiction. Toni's inability to snap out of crisis mode in her personal life had made her disastrous at managing relationships.

Six months ago Toni had finally buckled under the stress. She had walked out on "Sparky"—her mooching, noncommittal boyfriend—and her cushy salary without so much as a backwards glance. She'd sold her sports car, her furniture and her condo, cashed in her fat stock portfolio and rolled the proceeds into a one-way plane ticket and a down-payment on a new life in a tiny tourist town.

She'd been duped by the fine folks of Soldiers Orchard, Iowa, who had flimflammed her into believing that the answer to her troubles lay in their tiny Midwestern town. The night she'd decided to trade in her hectic life, Toni had typed the words "peaceful", "friendly", and "opportunity" into her Internet search engine. She'd been directed to the Soldiers Orchard Realty website and was greeted by a lovely pen-and-ink image of a tidy brick Federal-style inn. Five divided light windows were spaced evenly along the second story, each neatly framed with a set of proper black shutters. A pair of identical windows flanked each side of the arched double door entry. The caption below read, "A Diamond ‘Inn' the Rough! A Rare Investment Opportunity! Historic Civil War-era charmer in booming tourist town awaits a handy person with an entrepreneurial flair! Come discover friendly, peaceful Soldiers Orchard. The town council will provide a generous tax incentive to the right buyer. You provide a little elbow grease to make this fixer-upper sparkle."

"'A little elbow grease,' my ass," she grumbled as she slogged through the deep tire ruts and wrestled open the carriage house door.

The 'carriage house', much like ‘the inn', was deceptively named. Both conjured up romantic images of bucolic rural living and friendly folks stopping by to say howdy and chat a spell over iced tea and molasses cookies. The buildings were, in fact, a pair of decaying two-hundred-year-old money pits—which Toni had purchased, sight unseen, based on a misleading line drawing and an equally misleading real estate agent.

Now, a couple of centuries after it had been built, the carriage house had begun to lean. Toni yanked on the weather-beaten door but it ran aground on a hill of mud before it could be opened wide enough to clear the way for her battered truck. Everything about this financial boondoggle was a struggle. Try to fill the sink with wash water and the faucet crank came off in your hand. Flip a switch in anticipation of electric incandescent light and something deep within the crumbling plaster and lathe walls sputtered and hissed and moments later the entire inn went dark. The roof leaked, the foundation seeped and—according to a parade of plumbers and electricians—every major household system needed a complete overhaul. As she stood in the bone-chilling rain, trying to get the carriage house door to simply do its intended job, Toni wanted nothing more than to get out of the cold and into a hot tub. 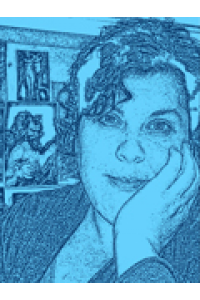 Share what you thought about Soldier of Love and earn reward points.

Buy Now: £1.99
A Triple Scoop of I Scream
Gabrielle Holly