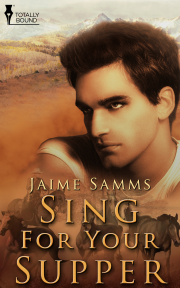 Sing For Your Supper

Hunger can drive a man to do just about anything in order to satisfy it, but when it's hunger of the heart, will past relationships keep three men wanting more?

Taylor has left home, chased out by his family because he's gay, and pursued across the prairies by the man who violently assaulted him in his own home. Now he's homeless, friendless and using his charm and skills learned on his knees before his father's farm hands to pay for his meals.

Matt sees something more than a desperate whore in the young rancher who comes to his diner in hopes a quick blow job will buy him a meal. He sees past Taylor's current circumstances to a man who just needs a clean break.

Matt sends Taylor off to his friend Jim's ranch hoping the older man will see the same things in Taylor and give him the opportunity to start over. No one expects the visceral attraction between the rancher and his new hire.

When Taylor's past catches up to him, and he realises he's put both men in jeopardy just for trying to help him, he thinks maybe he deserves to be branded the fool he is.

Publisher's Note: This story has been previously released as part of the Saddle Up N' Ride anthology by Totally Bound Publishing.

According to my map, there should have been a town here. I’d passed a closed gas station five minutes back, and a general store with a curling, paper “out to lunch” sign taped to the window. The crumbling, yellowed tape holding it in place looked like it hadn’t been taken down in months. The doors had been locked up tight.

I glanced at my gas gauge and felt the tension in the back of my neck crawl up toward that spot behind my left eye. I made a point of rolling my shoulders over in a useless attempt to ease the stress. The old Jeep I was driving wasn’t exactly a stellar gas saver, and the needle edged toward the big red ‘E’ awfully fast. I didn’t have to look in my wallet to know filling the tank was going to be problematic.

“Where the hell is ‘Redcliff’?” I glanced again at the map lying on the seat beside me. There was a tiny black dot about the point on the map I was driving through, but the gas station and store seemed to have been plunked down in the middle of nowhere, like tornado casualties deposited on the side of the road.

I rubbed a hand through my hair, trying to ignore the tightening in my gut. The gas tank wasn’t the only tank needing refilling. I was going to have to find a place to stop soon then make the decision—feed myself or fill the tank. I wasn’t going to be able to do both.

I still fell asleep with that image of the red-hot metal coming at me, Pete’s hands vice-like around my upper arms, Luke Driscoll’s leering face. I couldn’t remember what they’d been babbling about. The branding iron seeking my flesh, and the nasty taste of Luke’s spunk still in my mouth, had been about all I could focus on at the time.

Just the memory made my hands shake. Sweat trickled down my back and under the waist band of my jeans. Luke had been the one to lure me into that trap, swaying his tight ass and offering...

The highway blurred before me. It took a minute to clear my vision enough to reveal I was on the wrong side of the tarmac. I eased back to my own side of the road.

The guy had been my friend. Or so I’d thought. He’d certainly acted the part for months, and had no compunction about shoving his dick down my throat. In fact, he’d acted like it was us against the narrow-minded idiots I called family. But no. None of it had meant anything. He’d been bait. Willing bait, eager to take any opportunity I’d offer to get off, but bait, just the same.

I yanked on the wheel, veering off the highway onto the shoulder. Six months, and I couldn’t get the asshole’s betrayal out of my head. Couldn’t think past it.

Clouds of dust billowed past me on a warm breeze. The highway stretched out, straight and empty in both directions. I’d learned days ago that emptiness was an illusion in this heat. The shimmering waves of air above the pavement concealed oncoming cars pretty effectively. I sat for another minute, staring off into the desert of wheat fields, but I couldn’t sit there long. I had to get my ass somewhere, or who the hell knew how far I’d have to walk with empty pockets and an empty gas can.

I shut off the Jeep’s engine. I couldn’t stop shaking as the memory played through. It always played through, whether I wanted to remember or not. It was funny the little details that stood out...

Luke was younger than me by a few years, but a lot bigger. I remember taunting him that one day, he’d want me up his ass, and it had seemed that day had come. I had already counted it another conquest when he turned on me. I remember the rust-coloured cloud of dust lifting up around him when he spun, landing a roundhouse to my jaw and a wicked left into my gut.

Splayed out on the barn floor, the next thing I remembered was the scent of Irish Spring soap and not being able to breathe around his cock. It hadn’t been anything but violent, and he’d said as he spewed down my throat, that it served me right for trying to corrupt him. Getting his kicks was one thing, he’d said, but he wasn’t a fag. It’d be a cold day in hell before I ever got near his ass.

I’d pretty much lost the desire for it at that point.

He’d sat back to zip himself up, the sound loud in the still barn, and was still sitting on my chest when Pete had come in.

I’ll never know how Pete reconciled Luke pining me and raping my mouth constituted me assaulting the younger man, but that was the excuse he’d used to justify his actions that night. The only thing that saved me gaining a permanent reminder how much Pete hated me was our middle brother, calling from the barn yard, wondering where he was.

Alan. Pete’s shadow. Pete’s echo. My unwitting saviour. I never did find out if he knew what he’d saved me from, or if he would have tried to defend me from it himself. I only know Pete was quick to tell him what a degenerate I was, and he was quick to go to our father for mediation.

Share what you thought about Sing For Your Supper and earn reward points.