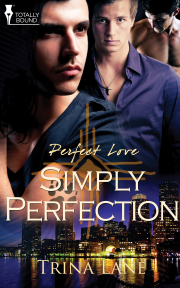 Book 4 in the Perfect Love series

Three men whose life trails converge must find a way to forge a new path together if they are to celebrate the love destined to be theirs.

Niall Roberge has patiently waited years to find the two men who are destined to hold his heart forever. He believes his prayers have been answered when he meets Dr. Matt Lincoln and Trevor Mitchell.

Matt has hungered for the closeness of a ménage relationship and is amazed at the instant connection he shares with Niall after being disappointed so many times before. Trevor has led a solitary life and is leery of entrusting his heart to two men who are capable of breaking through the protective walls he's managed to build with a single touch.

Matt Lincoln sat at the small table inside the bistro, waiting for his date to show up. He looked at his watch with a frown. Jaime was twenty minutes late. As Matt took a sip of his water, he thought, not for the first time in the four months they'd been dating, Jaime was frequently late. There'd been a time or two when Jaime hadn't even shown up at all, only to call hours later with profuse apologies and promises for it to never happen again. Each time Jaime swore his work had kept him late and there was nothing he could have done to prevent it, but deep inside Matt knew those were lies. Jaime worked as a buyer for one of the major department stores in Brookline. It's not like there were fashion crises that happened at all hours of the night.

Maybe Matt was being unfair. After four short months, more of it spent texting than actual time spent together, Matt couldn't have a real understanding of the demands Jaime's job made on him. Hell, maybe Jaime had a devil of a boss, like in that movie, where he was forced to run out for steak and coffee at the drop of a hat.

Matt looked at his watch again. Twenty-five minutes late. He'd told his patients countless times to value themselves and their needs in a relationship. Maybe he should listen to his own advice.

This is the last time.

His cell phone buzzed on the table and Matt unlocked the screen to find a text message from Jaime.

Matt's fingers flew over the touchscreen-We need 2 tlk. Call me

He dropped the phone onto the table in disgust at the same moment the waiter stepped up to the table.

The young blond, who'd introduced himself as Tim when Matt first arrived, had a crease in his brow and the pair of sweet brown eyes tightened.

"No, sorry. I just got stood up for dinner and hit up for a booty call in one fell swoop."

Tim's eyes widened and his jaw dropped. "You got stood up?"

Matt's laughter went no further than between them, but the tension in his body floated away into the open space of the restaurant. "Thank you. I'm flattered but think I'm a bit old for you. The waiter's face turned a charming shade of pink.

"Oh come on, you can't be that much older than me. Besides there's nothing wrong with a little seasoning, in my opinion. Not that I'm trying to hit on you or anything, I'm just saying."

"I can't decide if that's a compliment or an insult."

Tim looked over his shoulder and quickly turned back to the table, pad at the ready. "I'm sorry, sir. I've let my mouth get away from me. Will you still be dining with us this evening?"

Matt looked over Tim's shoulder and saw a middle-aged, pencil-thin man with a permanent scowl on his face staring in their direction. He'd been so eager to try this place after Logan and Clay raved about the food and service. "You know what - yes. I'll have the flattened lemon chicken with za?atar and Turkish cheese pancake. I'd also like a glass of the Boutari Moscofilero."

"Excellent choices. Do you wish me to remove the other place setting?"

"Please. Who wants to be reminded of unpleasantness with a good meal in front of them?"

The waiter removed Jaime's place setting with a little wink, and Matt had to smile. Tim seemed like a good kid, and Matt would make sure to leave him an extra large tip for the ego stroke.

When Matt's wine appeared, he took a sip. The cool spicy flavours and aroma filled his senses. It was perfect. Matt nodded his head in appreciation. Despite dining alone, Matt was determined to make the most of the evening, and come tomorrow he sort out his love life -or lack thereof.

4.5 out of 5!...a fun and entertaining story that I really enjoyed. It's well-written and plotted, has a smooth, fast pace, and is filled with interesting and intriguing characters...a story that...

Simply Perfection was a really good read for me...It is very easy to get caught up in the lives of these three men...I found myself smiling, laughing, crying and yelling right along with, and at, these...

Share what you thought about Simply Perfection and earn reward points.

Other books in the Perfect Love seriesView Series Page