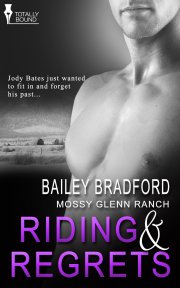 Jody Bates just wanted to fit in and forget his past, but you can’t escape everything.

Jody Bates had a hard life as a kid, but he’s moved past that and is making a home for himself at the Mossy Glenn. Sometimes he smarts off, but he’s young, and he’s learning.

What he hasn’t learned yet is that you can never completely escape your past.

Jody has a few blank spots, things he can’t quite remember. Like a lot of kids, he did some stupid things and figures he’s lucky to have come out relatively unscathed. Sure there’s a scar here and there, but on the whole, he’s doing just fine.

But something that happens brings about an enormous change in his life. Jody finds himself with a kid he didn’t know he’d fathered and memories trying to surface about the drug-filled night the child had to have been conceived. Jody, at twenty, is overwhelmed and more scared than he’s ever been in his life.

Noel Cuthbert needed a change. He was tired of the bar scene, tired of getting dumped. He seemed to have a six-month expiration date per relationship. The last guy almost broke him in more ways than one, and moving across the country had sounded like a brilliant idea when he’d first thought of it.

Now he’s in Ashville, Montana, and his Aunt Gertie is doing everything she can to talk him into staying. She needs his help, and Noel needs to be needed.

And he’s never seen anyone who needs him more than the young man who walks into Gertie’s daycare with a screaming toddler on his hip.

Noel Cuthbert parked his Honda Fit in his Aunt Gertie’s driveway, frowning at the lack of protection for his baby. “This won’t do at all.” There wasn’t a garage or even one of those cheesy metal carports. Just…open space. “Ugh.”

So far, he wasn’t impressed with Montana. “The last best place my ass,” he said, referencing one of the many slogans he’d heard used for the state. “Does seem like it’s the last place, period. Nothing but mountains and cows and pickup trucks.”

Well, he’d wanted to come, so he needed to shut up. Noel turned the car off and unbuckled. It was almost dark, and he kind of wanted to see the sky. That was one thing he’d definitely enjoyed on the week-long drive from California. He’d seen some amazing night skies. Something told him that Montana would offer him one that was simply stunning.

“State has to have something going for it.” He got out and gathered his laptop bag from the passenger seat. After he had his luggage, too, Noel headed up the sidewalk to the house.

The sidewalk itself was indicative of the whole neighbourhood. Worn, cracked in places, in serious need of weeding. Looked almost like it’d be easier to tear the whole walk up and re-pour new cement for it, rather than patch the cracks.

Not that Noel was volunteering, no way. He wasn’t built for manual labor. His gently sculpted muscles had taken forever to find beneath the flab he used to carry. That was the hardest he could work, and while he was proud of his slimmed down body, it’d really only caused him more trouble than not.

Noel sniffed. Who’d known that trying to get himself in shape would attract all the shallow assholes right to him? It’d been flattering at first. After all, he’d been the shy, fat boy who’d been teased in school up until then. To find men coming up to him and hitting on him once he’d lost weight and toned up some had been kind of addictive.

And okay, he’d maybe developed a bit of an ego for a while there, but that had been well and truly demolished after the last disastrous relationship.

“Ugh. Just don’t even go there,” he muttered to himself. He’d gotten used to his own chatter on the drive. The quiet had been unnerving when he’d grown sick of his playlists.

Beside the sidewalk, Noel noticed dead plants. Some kind of flowers, though he didn’t know what type they were. Other than dead, obviously. Crumbling edging, uneven and appearing to be made of faded brown or black plastic, ran parallel to either side of the walk. The rest of the yard seemed okay, if in need of a mowing. Rose bushes surrounded the porch, and at least those plants appeared to be thriving. Over-thriving, even. Noel was pretty sure they needed to be pruned, or maybe groomed with a blow-torch.

He heard the squeak of the door just before Aunt Gertie stepped outside. “Noel Cuthbert, you get up here and give me a hug!”

All of the troubles that had been riding on Noel’s shoulders fell away, at least for a few minutes as he rushed up the stairs. They groaned beneath his feet and he hoped that the old wood wouldn’t give way on him. The porch itself wasn’t any more stable. The wooden slats were bowed all over, and a couple were even missing.

“Aunt Gertie.” Noel stopped in front of his aunt. She wasn’t much shorter than his five-ten, maybe five-eight or so. They were close enough in height that he didn’t have to stoop to hug her, anyway.

“Come here, boy,” she said gruffly as she reached for him.

Noel barely had time to set the bags down before he was pulled into her surprisingly strong embrace. “Hi.”

Gertie smoothed her hands in circles over his back. “I’m sorry for whatever hurt you, honey, but I’m so glad you’re here.”

Noel almost laughed at that, but he was afraid he’d end up sobbing if he opened his mouth just then.

“You don’t have to tell me, not ever, but if you want to, I’ll listen. You know I will.” Gertie kissed his cheek then, keeping one arm around him, leaned back enough to push the chunk of hair back off his brow. With the dimming light, it was impossible to make out the colour of her eyes, but Noel didn’t have to. He saw her eyes every time he looked in the mirror, the grey-rimmed green identical, just like the shape of their eyes and the thick, dark lashes framing them. He’d always looked more like Gertie than his dad or mom.

“Whatever it is, we’ll make it better,” Gertie vowed fiercely. “No one gets to hurt my baby boy.”

Noel, at twenty-five, was hardly anyone’s baby anything, but the words still warmed him and for the first time in ages, he truly felt loved.

“Thank you, Aunt Gertie.” He had to stop speaking then as his eyes and nose burned with the threat of tears.

“Oh, honey, someone’s done a number on you. If I ever do find out the name of that man, or, God help me, men, I’m gonna go to prison.” She grinned in a way that was all teeth and anger. “Be worth it. No one gets to hurt you.”

Noel sniffled. He was not going to cry. He hadn’t cried since— No. No going there ever again.

“I ought to smack Richard upside the head, and Marcy, too,” Gertie continued. “Your parents are about useless. It’s a miracle you, Josephine and River turned out to be such good people, considering.”

“It’s because we had a fabulous aunt to help us when we were growing up,” Noel told her. “If you hadn’t lived with us all those years, there’s no telling how many prison sentences we’d all be serving.”

Gertie chortled at that and stepped back a foot or so. “Now, I could be modest, but it’s true that I stayed in California for you kids. Once you moved out, there wasn’t a reason for me to live in that hell-hole with those two parents of yours. I guess they’re still alive.”

“Last I heard.” Noel wasn’t even hurt by the fucked up relationship, or lack of, that he had with his parents. “I don’t keep in touch. Neither does Josie or River. I’m assuming the parents are still doing whatever it is they want to with no concern for us.”

Gertie tipped her nose up and sniffed. “You know, we weren’t raised up to be such selfish shits. Your daddy was always like that, though. Richard would do whatever it took to have his way and get what he wanted. Never did care who he hurt. I figured when him and your mom hooked up, they’d kill each other, they were so alike.” She waved a hand. “Well, whatever. They ain’t ever gonna change, and you kids came out great despite having a couple of sociopaths for parents. Now, come in here to the kitchen and let me feed you. You’ve gotten plumb scrawny.”

While there were plenty of tears to go around in this installment, they were both sad tears and happy tears and I found the overriding theme of the book to be extremely hopeful despite the heartbreak both...

This is a sweet love story that starts out with two men looking for a bit of comfort from each other but develops into so much more. The road they take isn’t always smooth but the...

Share what you thought about Riding and Regrets and earn reward points.