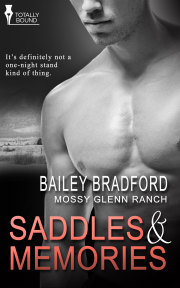 Salt Johnson has had his heart broken, or at least his ego dented, but he's about to meet a man who wipes away every bad memory Salt ever had.

Saul 'Salt' Johnson had a crush on the wrong man. No surprise. He doesn't have much experience when it comes to relationships despite his age. Being a cowboy in Montana means keeping in the closet, which has left Salt with a long line of one-night stands. Getting hired on at the Mossy Glenn changes all of that, and he's beginning to see that maybe he can have more than he's been settling for.

He just doesn't expect to find it with another one-night stand.

Andy Calder spent years taking care of his brother Destry and helping to raise his nephew, Ty. Now both are gone—Destry passed away and Ty being raised by Andy's spiteful younger brother. Andy hasn't forgiven himself for being manipulated after Destry's death. He just hopes Ty is happy. Andy's working hard to build up the company he'd started with Destry, wanting to leave Ty a legacy he could build on. Things just aren't going as planned, and when he decides to blow off some steam with a sexy, rough cowboy, they end up connecting in a way neither of them ever expected.

It's definitely not a one-night stand kind of thing.

Jesus, it was hot. Saul 'Salt' Johnson couldn’t remember a Montana summer ever being so hellacious. Sweat was running down his back, tickling its way past the waistband of his jeans and making him want to scratch indecently. His brow was soaked, above and below the brim of his straw hat. Salt’s eyes stung as much from the sweat dripping in them as from the God-awful bright sun.

There wasn’t a cloud in sight in that bright blue sky, either. Salt could see the ranch land for miles, and past that, in the distance off to the south, the ridges and peaks of the Absaroka Mountains. He’d seen them once, up close-like, and had been awed by the majestic beauty of the mountains.

It’d made him feel tiny and inconsequential at the same time, driving home the fact that he wasn’t anything important in the grand scheme of things. He’d live and die, and his body would rot, his bones turn to dust, but those mountains would still be there, reaching up into the sky.

Salt didn’t take it personal, though. Man wasn’t meant to be more enduring than those mountains. All a person had to do to see that was turn on the TV news or look at it online. Always fighting and killing, suppressing and hating. Salt didn’t get it, but he reckoned he wasn’t supposed to. Besides, he’d never been a particularly deep thinker.

The heat surely wasn’t helping that any, either. Salt was thinking his brain might just be baking in his skull. He lifted his hat off, took his bandana from his neck, and wiped his face from hairline to chin.

The east pasture was showing signs of drought, never a good thing on a ranch, especially one just starting out. He’d heard the Mossy Glenn had been something to brag about years back. The last owner had run it into the ground, and maybe not many people could see beyond that, but Salt could easily envision the way the place must have looked before. New buildings with fresh paint, a good, strong fence line, grass so green it made you yearn to take a nap on it and fresh water flowing in the stream that cut across the land.

That water was still there, but flowing was a generous description of it. Trickled, that was what it did, but at least they had something in the stream. There were others not so lucky.

Salt quit woolgathering and got to his task. The stock tank was too low to put any more horses in the pasture. There wasn’t much left of the pond, and the mud could be dangerous on a horse’s ankles for starters. That was why Salt had moved the small herd of Quarter horses earlier. Now he was trying to judge whether it’d be better to have the stock tank filled, or start having someone look for a source of underground water. It just might be easier to do that and get some pipes running to a water trough. Give the horses a fresh source of water.

Of course, that depended on finding a water source. The stream wasn’t an option, but there might be an underground well somewhere close enough to be serviceable.

Salt scratched his cheek, thinking of a dowser he’d seen about ten years back. The woman had used two y-shaped sticks to find a well on a ranch he’d been working back then. There’d been shit-talking by the cowhands, first because she was a she, and second because of the branches and the gossiping about dowsing being witchcraft.

But that lady had found water sure enough, and not one person dared to mutter under his breath around her after that. He wondered if Carlos would be open to having a dowser, preferably that same one, come walk his land.

Might take some time, Salt reasoned, so they were likely going to have to have the stock tank filled. It’d be costly. Everyone raised their prices in a drought, but the horses had to have water.

Filling the stock tank would help the grass stay green, too, or at least more of it than not. Salt gave a nod, decision made. They’d keep the tank filled, but if the ranch could afford it, it wouldn’t hurt to check for another water source or two.

He heard the sound of an approaching vehicle and figured it’d be Rocky. She’d quickly become his best friend, much to Salt’s surprise. While he was easy-going around other people, friendly and all that, he’d never really had close friends.

When he’d worked other ranches, he’d had to worry too much about hiding the fact that he was gay to let anyone close. A lifetime of keeping a distance between him and anyone else should have held up under Rocky’s attempts at friendship, but they hadn’t. Maybe he was just getting old.

Okay, at forty-five, he wasn’t exactly ancient but he’d sure have thought he’d be more set in his ways. Then again, Rocky was a force to be reckoned with. Lord knew there wasn’t anyone on the Mossy Glenn who’d snicker over her being a woman and live to talk about it. Cowboys could be some of the biggest misogynists, Salt could admit that. Didn’t make them all evil, just ignorant in some places.

He turned and watched the battered white Ford F-250 coming down the road. Rocky waved to him and he flapped a hand in return. Then he checked the two-way radio on his hip. Volume was up and it was working, which meant Rocky hadn’t tried reaching him on it and failed. He had driven the other truck out, too, so he didn’t need a ride. That pretty much meant Rocky was coming out to chat, a rare but not totally unheard of thing for her to do.

Salt took the time to wipe his face down again while Rocky pulled up beside his truck. He strolled over as she was getting out. "What you doing out here, woman? You get lost again?"

Rocky flipped him off as she guffawed. "Aw, fuck you, Salt. I figgered as long as you been out here, I’d better make sure you weren’t buzzard food."

Salt was about to point out that there weren’t any buzzards when he glanced up and saw that there were three of the birds circling way up in the air. "Huh. Guess they’re waiting for me to vacate so they can drink. That or the smell of the stock tank is tricking them into thinking something died." Lord knew the mud reeked.

Share what you thought about Saddles and Memories PRINT and earn reward points.