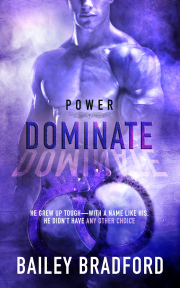 Book 3 in the Power series

Forest is absent-minded, oblivious and so adorable, Dominant Quarry Light can’t help but to fall for him.

The only problem is, that benefit had never appeared, and after having his heart and hopes crushed twice, Quar has decided he’ll stick to just scening with a sub now and then.

Fate has other things in mind, namely in the form of one Forest Tilden.

Forest is absent-minded, oblivious and so adorable, Quar can’t help but ask for his number after he stops to help the poor guy. Forest’s car picked the right day to bite it. He’s going to get more than a little mechanical advice from Quar. Together, they might get the future they both long for.

Not that he’d ever been a believer in fate before then, and he probably wouldn’t put any faith in it after tonight, either.

He stood with his back to a wall. All the tables were taken, but he’d found himself a spot where he didn’t think he’d be in anyone’s way.

And he could see all of the open area of the club. He tried not to stare at anyone.

It was hard not to gawk, though. There were men and women naked or close to it here and there. Lots of leather, not just on the Doms and Dommes. He spotted a sub wearing white leather chaps and a thong kneeling by his Dom.

Forest was wearing sort of tight jeans and a Rogue One T-shirt. Not the height of fashion, but it was what he was comfortable in. As nervous as he was tonight, he needed whatever comfort he could find.

A sub cried out and Forest jerked his head toward the sound. He watched as a Dom spanked the sub with a paddle. A half-dozen or so people were moving closer to observe the pair. Forest assumed there was nothing wrong with him doing the same. He left his spot against the wall and walked a few steps closer.

“Like what you see?” someone rumbled from behind Forest.

Forest jolted and spun around to find himself nose to chest with a man wearing black leather. “Uh.”

“You need to learn some manners, boy,” the man said as he reached for Forest. “Bet a whip can teach you those.”

“J.D., back off.” The voice delivering that order sent a shiver down Forest’s spine.

He turned toward the Dom and sub he’d been watching a moment earlier, and found the owner of that magnificent voice staring at him. Oh, dang. He’s handsome! Not model-perfect, but rough-hewn and masculine.

“He’s not a prize, J.D. I’m sure if this gentleman wants your attention, he’ll say so,” Quar—what kind of name is that?—replied. “No terrifying unwilling subs, you know the rules, and if you can’t follow them, you also know where the door is.”

“Think you’re hot shit because you’re one of the owners,” J.D. muttered. “You ain’t even a cold turd. You don’t control me.”

Forest bit the inside of his cheek and wondered if he should make a run for the door Quar had mentioned. He took a step back so he could keep an eye on both men.

“No, but I do control what happens in my club,” Quar countered. “And if we’re playing a game of I saw him first, what’s he driving?”

J.D. scowled. “What’re you talking about? I’ve been watching him in here.”

“Okay. Then I saw him first. I was in the parking lot when he pulled up. Following your logic, I’d have first dibs.” Quar gestured at Forest. “But again, that would be up to…” He arched an eyebrow at Forest.

“Forest, sir,” Forest mumbled. The ‘sir’ slipped out before he could think about it.

Quar nodded. “And would you like to have J.D. show you around? I hate to put you on the spot, but you’ll have to be upfront with him.”

Forest hated confrontations. He gulped as he slid a foot away from J.D., which put him closer to Quar. Both men waited on him to answer. An uncomfortable knot born of anxiety grew in Forest’s gut. He wished Quar would speak up for him. Forest was certain Quar knew his answer.

But Quar only nodded again when Forest dared to look him in the eyes.

Then Forest felt it—a warm touch to his hip. He knew it was Quar, unless J.D. had grown stretchy arms. That press of fingers gave Forest the strength he needed to speak. “I-I don’t want to hang out with you, J.D.”

Quar stepped around Forest, putting himself in between him and J.D. “The sub has the power, J.D. Respect that or leave and don’t come back.”

J.D. said something Forest couldn’t quite make out before stomping away like a pissed-off toddler.

“I’ll have to have one of the other owners speak with him about our rules,” Quar said as he looked at Forest. “I’m Quar, well, Quarry Light, by the way. Odd name, I know, but my parents are quirky. I’ve got two brothers with odd names, too—Slate and Coal. Contrary to how it may seem, our parents do actually love us.”

Forest laughed as the knot in his belly dissipated. “Forest Tilden. Are they interested in mining or rocks?”

Quar’s smile warmed Forest all the way down to his toes. “Protested mining practices, and yeah, both are geologists. Good call.”

The praise made Forest want to preen, but he didn’t.

“So, I really was in the parking lot when you pulled up,” Quar said. “And I heard the mini-explosion under your hood. Saw the smoke, too. I noticed you seemed hesitant to come in. Most of us here are decent people. You don’t have to be afraid to check things out, but if you’d like, I can give you a tour and answer any questions you might have.”

“Oh, wow, sir—” And there it was again, that ‘sir’ slipping out before Forest could censor it. “I almost didn’t come inside. If the car hadn’t done that sputtering thing, along with the smoke, I probably would have left. But…” You can do this, Forest. Ask for what you want. “I’d like to have a tour. I have questions, but I don’t know if I’ll have the guts to ask them.”

Share what you thought about Dominate and earn reward points.