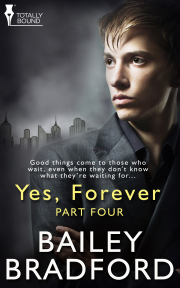 Depression grabs John by the ankles, and Benji's hot and cold turns are driving John deeper into hopelessness.

John and Benji begin a strictly sexual relationship. Benji is calling the shots, and John knows if he wants any of Benji at all, he has to follow along docilely.Except his mood plummets, and when it doesn't seem to improve any, and after he makes a series of mistakes at work, John has to face the fact that he might be having a recurrence of depression.An ass chewing by his boss and one psychiatrist's visit later, John has his diagnosis and a prescription for new medication to help him out. There is no easy cure, he knows that, but he won't turn down the help the medicine can give him.A steamy, powerful encounter between John and Benji changes things between them, and Benji is going to cut him off and run, John knows it. He's not going to give the man up so easily, though, not now that he's found one of the things that makes Benji tick…

The saga continues and poor John is struggling but he may finally be learning something about himself and real honesty may lead to getting him the best treatment. He also has gained a bit of insight...

Share what you thought about Yes, Forever: Part Four and earn reward points.