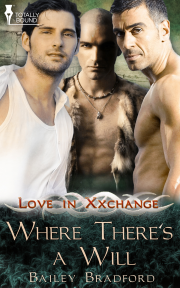 Where There's A Will

Book 9 in the Love in Xxchange series

Three men who've given up on love find it in the most unexpected place.

A rough cowboy, a sassy spitfire, and a bartender—they sound like the start of a joke, but there's nothing funny about the way Carlos feels when a sexy spitfire of a man blows him a kiss.

Carlos came down to Texas from the Mossy Glenn Ranch in Montana to deliver some bad news to his former boss Nick. Just one problem, his GPS unit is a lying POS. It keeps having him drive in circles and nagging him to turn in impossible places.

Then a man blows him a kiss, and reawakens a part of him Carlos thought was dead and gone. He's a middle aged cowboy, tired and unemployed, yet when he stops for directions and sees the sexy spitfire getting jacked off by one very handsome, stacked bartender, it's a jolt to his libido.

When Will and Troy invite him to play and make it clear they aren't a couple, they're just strangers like his is to them, Carlos just can't resist.

But each of them have secrets, pain and desires, needs and hopes. Will is hated by most the town residents, Troy can't accept his own needs, and Carlos has let his past control him for almost two decades. Can they find what they need together and in themselves? Is such a thing possible?

All in all, Will was pretty damned content, at least when it came to work. He had a pretty cushy gig going now, one that didn’t tax the conscience he usually kept hidden away. Sometimes being a private investigator called for him to do things that just skirted the edges of ethical, or at least it felt that way to him. Having to spy on a guy who’d been through hell had sucked, but Will had been paid to do it—paid well, honestly—and even though he’d felt kind of shitty about it, he’d figured it was better that he be the one hunting down James Stratton than some other PI who wouldn’t have hesitated snatching the dude and dragging him back to his hoity-toity snotty parents.

At least Will had outright refused to do that, and had even threatened to alert James Stratton’s friends if Mr and Mrs Stratton brought someone else in to abduct James like they’d said they would. He wasn’t the brightest damn crayon in the box, but even he could see that James was in a good place—i.e., away from his insanely overprotective parents. Maybe there’d been a time when Will would have done what the elder Stratton’s wanted, but with age came wisdom and all that shit. He’d had some life lessons that had taught him to listen to his conscience for the most part, so he’d stayed on the job and bullied Mr and Mrs Stratton, because that was the only way to handle people like that. They sure didn’t understand that their way wasn’t the best way.

Will snorted. Yeah, that was familiar. Sounded kinda like his own folks, except they weren’t wealthy. Middle class, which in today’s economy could be financially flush one moment then scraping for the mortgage payment the next, but definitely not wealthy. Still, his dad had that same rigid personality as Mr Stratton, that I’m right and anyone who doesn’t agree is too fucking stupid to see how intellectually superior I am type attitude. His mom, however, wasn’t like Mrs Stratton, not with her nose so damn high in the air she’d drown if she got caught out in the rain.

No, his mom was more the quiet, skittish type who went along with whatever Will’s dad said. If Will didn’t know better, he’d think his mom was an abused spouse, but she wasn’t. His dad doted on her; nope, Wilma Leaks was just a quiet, easily spooked person who was perfectly content to always let someone else lead, even if it was in a shitty direction. And not a single one of her kids—all boys, poor Mom—had turned out like her. Will kinda thought his dad would have bullied it out of them if he or any of his four brothers had been as shy and demure as their mom.

“And why the fuck am I thinking about this stuff now?” Will muttered to himself as he reached for the volume button on the car stereo. There was a reason he had a killer sound system in his little Mini Cooper. Will had a tendency to brood and sink into a funk if he gave himself half a chance, especially when it came to thinking about his job working for his dad or…well, when he thought about his family much at all, because they were kind of a mess. He figured most families were, though. After all, look at the Strattons. They sure did hurt their own son doing what they thought was best…or what they thought was best for them.

The case bothered him, like a constant itch between his shoulder blades. Really, he’d almost quit once or twice, had even gone so far as to haul ass out of town, only to be caught speeding. But it looked like something had changed finally, because while he was still employed by the Strattons’, his job description had changed from being invasive and spying to more along the lines of just keeping an eye on James Stratton. Will could do that, and not feel quite so skeevy about it. And if he also got to eyeball Glenn, well, that was good too. The older man was just hot, but Will wouldn’t have tried to seduce him for the world. James deserved something good in his life. But Will could look, just not as obviously as he had before.

“Enough already,” Will sniped at himself. He’d had so many moody moments he was seriously considering investing in some Midol or something. “Jesus. One shitty case and I start doing that whole introspection crap. Maybe I should go fishing or hunting or something—” Will laughed and flipped the volume up until the bass made his heart thump in his chest. He was so not the fishing or hunting type. “More the club and random fucking type,” he muttered, grinning when he couldn’t even hear his own voice. Loud music was good; caused the few brain cells trying to make him stress to pulse and probably explode or something. He stopped at a four-way and played with the buttons until he found a Prince song he just had to shriek along with.

Will wasn’t a shy person at all, and singing and bouncing to a beat in his car was something he did regularly and shamelessly. What did he care who saw him? Especially here in this small Texas town of Truett? No one knew him, and the people who knew of him didn’t like him, so if they saw him and laughed, who cared? Besides, it was Prince and who could resist that part where the little dude about broke the mic screeching? Not Will, that’s for sure!

He pulled away from the four-way and bounced in his seat, working a little shimmy up to his shoulders as he scraped his throat raw trying to match the singer’s vocals on the last couple of lines. He wasn’t half bad, and damn but he could wiggle his ass even sitting down! Will bobbed his head and narrowed his eyes as he hit the last couple of words before letting out a breathy, growly “Kiss,” delighted at the perfect timing of an oncoming car. It passed him just in time for Will to pucker up and blow a big kiss towards the driver, and Will couldn’t help laughing afterwards at the cowboy’s expression.

The man had had his window down, so yeah, Will had been able to see his weathered features, which had been damn sexy in that Marlboro Man way. Add the shocked look on the man’s face, his dark eyes going wide and the way he swerved his big old truck when Will glanced in his side mirror after he passed the dude, and yeah, it was pretty funny. Until the cowboy hit his brakes and pulled over to the side of the road. Then it was kinda on the scary side, and Will instantly regretted his impulsive action, because, yeah, small town Texas, big older cowboy…

Sometimes he could really be a dumbass, Will thought. Scary visions of being chased down by the cowboy flashed through Will’s head as the truck began a u-turn. Will squeaked and shot a glance at his glove box…his tiny glove box that held an equally tiny gun. The big grey truck completed the turn as sweat broke out on Will’s palms and brow, and above his upper lip.

Will eased the gas pedal down, not wanting to appear scared or anything else that would make him seem weak, or like…like prey. Then the truck lurched forward and Will thought, fuck it! He floored the gas pedal and shot down the road.

I absolutely love Bailey’s writing style.  The author really knows how to paint a picture with words.

I love that this story is a bit complicated. It is a we...

Three men given up on dreams of having love and being with the right man find each other. It all starts as a game but before much longer they are deadly serious about each other and are giving each other...

Share what you thought about Where There's A Will and earn reward points.