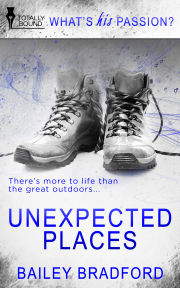 Love finds you in the most unexpected places.

Carter Hausemann loves his adventures in the great outdoors. He never feels as free and happy as he does when he’s hiking up a mountain or over a desert trail. After a childhood spent locked indoors, he craves the sunlight on his face and the blanket of moonlight.

Unfortunately, he has to work, so his hiking trips aren’t as frequent as he would like.

He has a new adventure planned, but little does he know, his real adventure will start at a worn-down looking club in Odessa, Texas. Carter’s dreams of finding his perfect men will become more than fantasy, starting with one sexy leather-clad man, Eddie Canales. What starts out as a night of debauchery turns into so much more.

“Hey, Carter, you headed out to Grayson’s?”

Carter Hausemann bit back a groan. He hadn’t gotten away quick enough to avoid Mark Watson. Carter turned to watch him approach the elevator. Mark was an attractive guy, but he wasn’t someone Carter wanted a long-term anything with. Or even a quick fuck, for that matter. Mark skeeved him out.

“Actually, I’m not,” Carter told him.

He desperately hoped someone else would join them for the elevator ride down from the twelfth floor. Mark could be pushy to the point of obnoxious if they were alone.

“I’m going home to prepare for the hiking trip I’m taking over the weekend.” Not that it was any of Mark’s business, but Carter hoped it would get the man to back off.

Instead, Mark stopped just a little too close, but not so much that Carter could call him out on it. Well, he could, but Mark would likely tell him he was being paranoid—even though they’d both know better.

“Hiking again?” Mark raked him with a calculating gaze Carter had seen too often. “Surely there are better things to do with your time?”

And that attitude was one of the reasons Carter would never want to hook up with Mark. Besides being a co-worker, he always had something bordering on snide to say about Carter’s love of hiking.

Carter shifted his briefcase into the hand closest to Mark, forcing him to move back or get whacked on the knee. As tempting as it was to be a dick and tell Mark to fuck off, Carter wouldn’t do it. He was certain that, eventually, Mark would lose interest in him.

“Nothing beats the great outdoors.”

“Nothing?” Mark asked, skepticism layering over his features. “Uh huh. I’ve seen the Odessa Meteor Crater hiking trail and don’t see how anyone could want to bother with it more than once, yet you seem to practically live out there on the weekends.” Mark cocked his head and gave Carter a borderline leer. “If that’s the most fun you’ve had here in Odessa, maybe you’ve been doing some things wrong, because I can think of at least one thing that should top the great outdoors.”

Becca was his boss, and he’d never been so grateful to see her as he was at that moment. She got on the elevator with him and Mark after murmuring greetings to them. Carter made certain he stood on her right, as Mark was to Becca’s left.

“Are you ready for your trip? This one’s going to be different from your usual day-hikes out here. Think this will be a big adventure?” Becca asked him. She pressed the button for the ground floor.

Carter smiled warmly at her. He liked his boss, was glad to be working on her team. “Hopefully it will be, yeah, though not the get-eaten-by-a-bear kind of adventure. As to being ready, almost. I’m quite excited about the weekend trip exploring parts of Big Bend. I’ve been wanting to see it ever since I moved here.”

“You just have to pack,” Mark added, eyeing him as if gauging whether or not Carter had lied about that.

“Exactly,” Carter agreed. “I was given a list of recommended supplies for the trip after I signed up for it. This’ll be my first weekend hike there. I’ve been all over New Mexico and Colorado.”

Becca turned to him, effectively cutting Mark out of the conversation. “You know, your enthusiasm is inspiring. I think I’ll talk to Lee about taking the kids hiking soon. Plus, the exercise will do us all some good. Let me know what you think about Big Bend.”

Carter nibbled his bottom lip, running through what he did know. The elevator reached the ground floor. The doors opened and Mark hovered. Carter focused on Becca. “After you.”

Reviewed by Crystal's Many Reviews

By the end of the story, I didn’t want it to end! I am dying to find out if Carter and Eddie are able to figure things out, or if Carter will be left wondering about his future.  For this be...

I found this short story really hot, lots of lust but also with a very likeable story line. We learned why Carter had a love for the outdoors, his fantasies of rough sex and more than one partner. Which...

Share what you thought about Unexpected Places and earn reward points.

• I love being outdoors, unless the temperature hits the triple digits, then not so much. Hiking, which is Carter Hausemann's passion in Unexpected Places, is also one of mine. I try to get to New Mexico to hike a few times a year, usually in Gila somewhere. The Silver Creek trail there is gorgeous. The Cat Walk over in Glenwood was an amazing hike, too, but it's been destroyed in places due to mudslides.

Take a sneak peak at Unexpected Places in the latest issue of BTSe Magazine!