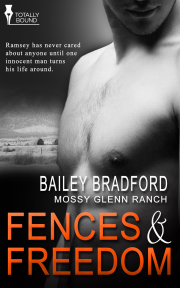 Ramsey Carmichael has never cared about anyone or anything except writing the next story, until one innocent man turns his life around.

Barney Rader can’t shake the label he’s always carried—that of the town’s poor kid. It’s been him and his mom ever since his dad died years ago. He’s struggling to make a living and bring home enough money to keep him and his mom going. After months of trying, Barney gets hired at the Mossy Glenn Ranch, and the first thing he learns is that he wants Ramsey Carmichael. Bad.

Ramsey Carmichael has fucked more men than he can remember, and Barney is one tempting piece of ass. But while Barney might be naive, he isn’t stupid. Before Ramsey knows what hits him, he’s tangled up with Barney—and re-examining his life. Ramsey doesn’t like what he discovers, but turning his life around is a lot easier said than done.

Sometimes he thought too much, if such a thing were possible. Barney Rader had been awake and staring at the ceiling in his bedroom for too long, his mind racing around from one thing to another. He was used to keeping his own counsel and had to talk or think things through by himself. He always had.

Growing up an only child had been lonely, especially for a boy who hadn’t had the best of social skills. Not that he’d lacked the upbringing for it. It was just a fact—Barney could bumble, stumble and stick his foot in his mouth along with the best of them. That didn’t keep him from trying, however. He didn’t want to end up the old geezer on the block who was always throwing a shoe at kids who dared to step on his grass. If he lived to be an old geezer.

There was always a chance he could starve to death first. Jobs were scarce, and Barney was a big guy. He required a lot to feel full. Or he could end up like his dad, dead before thirty from a lightning strike. Barney still remembered that day. His dad had said he was going to run outside and make sure the windows on the truck were rolled up because a surprise storm had hit. Barney had wanted to go, too, but his dad had told him to stay inside.

Barney had, and from the screen door he’d seen the blinding flash of light, heard the earth-shattering sound of thunder. It’d certainly shattered his and his mom’s world. Barney didn’t like thinking about that day. Everything had changed thanks to one split-second in time that Barney wished he could change.

He needed to quit dwelling on it. It’d happened fifteen years ago exactly, which was why Barney’s thoughts kept drifting to his dad. Barney definitely didn’t want to see the memory he had of that instant, and usually he couldn’t. It was a burnt-out spot in his brain. Only in nightmares did he see more than that ball of white light.

Barney grunted and got out of bed. He couldn’t laze around. Today he was supposed to go weed Mrs Jackson’s garden for twenty bucks. Not much, and the job was sure worth more, but she lived on her social security check, and anyway, Barney needed the money. After that, he could stop by the diner and see his mom. Usually he got a free meal if there was a messed-up order. If not, then he at least got a fifty percent discount. Plus, he got to see his mom.

He was, admittedly, a bit of a mama’s boy. Money wasn’t the only reason he still lived at home. Barney supposed he had some issues. Maybe he was clingy. Well, whatever. Him and his mom needed each other. She didn’t make enough at the diner to pay the rent all the time, much less the other bills like electric and water. Barney helped as much as he could, but finding a steady, full-time job seemed to be a fantasy rather than a real possibility.

“Pretty sad when I’m fantasizin’ about a job instead of a person,” Barney muttered as he made his way to the bathroom. He gave himself a passing glance in the mirror. Nope, didn’t wake up looking like Prince Charming. His unruly blond hair stood up all over the place, and his cheeks had that ruddy red tint to them. His flat, broad face wasn’t chiseled into any kind of sexy angles that he could see. He was just a big, beefy blond guy who looked like he could pull a plow himself.

After peeing, he flushed then washed his hands. His teeth were next. Barney barely dampened his toothbrush before putting just a dab of paste on it. As much as he’d like to shower, that’d have to wait. He’d need a shower at the day’s end and they couldn’t afford a big water bill.

Barney tried to compensate with a liberal amount of deodorant. The dollar store carried a decent brand, so he could at least be less stingy with it. Plus, no one was going to hire him for any kind of work if he smelled rank.

His hair… Barney sighed and tried to brush it into some semblance of decency, but it was hopeless. He needed to have it shorn down to his scalp, that was what he needed to do. Then he wouldn’t have to wear the ratty ball cap he had.

Yeah, he would. A sunburnt scalp would suck.

Well, it was a darn good thing he wasn’t competing in any kind of beauty pageant because he sure wouldn’t win. “Do they even have those for guys?” he wondered to himself.

Being an only child had led Barney into hundreds, maybe even thousands of such conversations. Sometimes he even answered himself.

He took his pair of clean overalls out of the closet. Some of the younger kids in town made fun of him for wearing them, but Barney didn’t care. He laid them on the bed before putting on a faded, thin blue T-shirt.

Once he’d gotten dressed, Barney put his cap on. His work boots needed some more duct tape around them or he’d be walking on the soles of his feet instead of the worn ones of his boots. After he’d used the last of the silver tape on his boots, Barney left the house. Breakfast would have been nice, but he wanted an early start to the weeding so the heat wouldn’t be too bad.

His mother had the early shift at the diner, so Barney locked the front door when he left. Anyone who really wanted in could jimmy the lock but no one would bother. Everyone in Ashville knew they were poor. Sometimes Barney thought poverty had a scent to it—besides his lack of showers—that clung to him and his mama no matter what they did.

Outside, the morning sun was just peeking over the mountains in the distance. Barney tugged his cap down and ignored his growling belly. He trudged down the steps and let his mind drift over the half-hour walk to Mrs Jackson’s. He kept his thoughts away from his dad, and away from Fred Jr, the boy he’d had a crush on for just about forever. Barney still felt guilty for not stepping in and whipping the tar out of Fred Sr. If he had done so a few years ago, maybe Jr wouldn’t have been beaten nearly to death.

It seemed to Barney that something had broken inside of Fred Jr that day months ago when he’d almost died from his daddy’s fists. Fred had turned mean after that, or maybe crazy, starting fires and shooting a police officer. All that Barney knew for certain about Fred Jr now was that the sweet boy Barney had crushed on was long gone.

Share what you thought about Fences and Freedom PRINT and earn reward points.