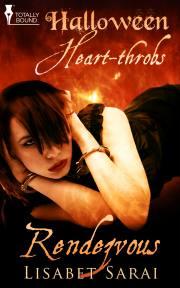 For Rebecca, Halloween has always been special, an opportunity for her to cast off her sensible, ordinary self and assume a new look and a new identity: someone extraordinary, sensual and seductive.

When Halloween night finds her stranded by a breakdown in a seedy motel nearly a hundred miles from her friend's annual party, she's terribly frustrated and disappointed. Then she discovers that her room is haunted by the invisible but unquestionably virile ghost of a rake who seduced local women nearly half a century earlier. Gradually, the ghost unmasks Rebecca's secret desires, fulfilling every one.

By the time midnight tolls, Rebecca has come face to face with more magic than she had ever imagined.

This book contains scenes that some readers may find objectionable

It was as though I'd been cursed.

First, my boss sent me on an out-of-state sales trip for the day. That effectively nixed my plan to leave work early and help Christie get ready for her party. Then, as I was rushing to get back to the city, the trusty Taurus blew a gasket on an empty stretch of I-35 south of Emporia. The mechanic told me that the problem wouldn't be fixed before noon the next day.

The next day? I couldn't believe my bad luck. I was stuck until November 1st in some dinky town nearly a hundred miles from Kansas City. If the car had been my own, I would have found a bus or a cab home and come back after Halloween to pick it up. But of course it was the company's car, and I knew I'd catch hell if I abandoned it in some no-name garage.

The motel was the last straw. Maybe I could have consoled myself in a nice modern Holiday Inn or even a Super-8: taken a long hot shower, relaxed on the king-sized bed, and wallowed in self-pity while eating take-out pizza and sampling the mini-bar. The Ranch Motel, though, was the kind of relic that you’d think only exists in horror movies. The fake pine panelling was warped by damp. Staring at the wall, you felt that you were looking in a fun-house mirror. The furniture was pure Ozzie and Harriet, right down to the twin beds with their faux-colonial bedposts. The shower head dribbled even when shut tight; streaks of red stained the bottom of the bathtub. Rust, of course, but I couldn't suppress a little shiver at the gory appearance.

The grizzled desk clerk shook his head when I asked about restaurants, bars, any kind of local entertainment. “Closest food is the diner in Cottonwood Falls, eight miles back. But they don't deliver past six.” He looked alarmed when he realised that I was on the verge of crying. “There's vending machines 'round back, Miss.”

Seeing that this did not reassure me, he reached under the counter and brought out an unopened half-pint of cheap scotch. “Here, you can have this. Help you relax. And we've got satellite TV, too. Works most of the time.”

I managed to swallow my tears and take the bottle. “Thanks. What about breakfast, though?”

“If you're awake by six tomorrow, I can run you into Emporia at the end of my shift.”

“Thanks, I'd really appreciate that.” I paused at the screen door, surveying the empty parking lot. “Expecting anyone else tonight?”

“Nope. Might get some late-night trucker, but they usually want a place with better —amenities, I think you call 'em.”

“Yeah, that's right. Amenities.” I tried not to be sarcastic. The old guy was working hard to be nice.

I strolled across the gravel on the way back to Room 7. It was crisp and breezy, but warm for October. A golden crescent moon hung near the horizon, across the fields of stubble that stretched in all directions. If I strained my ears, I could hear the distant hum of traffic on I-35. Otherwise, it was as quiet as the grave.

An appropriate comparison for Halloween. I threw myself down on the chenille spread, tears threatening again. Damn, damn, damn. Why tonight, of all nights? I checked my watch; it was just seven. Christie would be in costume already. She'd be lighting the candles, dumping the brandy into the witches' brew punch, laying out the tarot cards in preparation for her guests' arrival. I wanted to be there, more than I'd ever wanted anything.

You have to understand. For me, Halloween has always been special. When I was a child, I'd count the months and then the days. I'd spend weeks working on my costume, thrilling with anticipation of the moment when I'd actually put it on and become someone else. For a few glorious hours, I'd be a witch or a black widow spider, a gypsy or a pirate or a creature from outer space. On November 1st, I'd already be planning who I'd become on the next All Hallow's Eve.

I haven't changed. I still believe in magic. The air is still full of possibilities on Halloween. As I've gotten older, I've realised that some of the thrill is sexual. On Halloween, I become someone more exciting, more daring, more willing to take risks. I exchange my dirty blonde hair and B-cup breasts for raven tresses and a voluptuous cleavage, my suits and sensible heels for fishnets and stilettos. On Halloween, I flirt, I fascinate, I bewitch. I draw my lovers to me, attract them with the pure power of my lust.

Of course, I hadn't actually had a lover for nearly a year, since Jim packed up and moved to San Francisco. On Halloween, though, anything could happen.

To miss Halloween was a tragedy. To wait for another year, for my next chance... I couldn't bear it. I buried my face in the lumpy pillow and wailed at the injustice. What had I done to deserve this?

I cried until my eyes burned and my throat was sore. When I finally sat up again, the disappointment had settled in my chest as a dull ache. I poured several inches of the clerk's scotch into a flimsy disposable cup, and swallowed it in two gulps. The liquor soothed my throat but smouldered in my belly. In fact, I felt warm all over.

I stripped off my blouse and slacks and then helped myself to more of the scotch. Well, at least I could do our traditional midnight toast, even if it would be solitary. I considered calling Christie, but couldn't bring myself to that, not yet. I'd do it later, when I was drunker, and it didn't hurt so much.

5 out of 5! Rendezvous is a sexy Halloween story from beginning to end. Lisabet Sarai has created fantastic chemistry between her characters, with steamy dialogue and a fantastic setting.

Share what you thought about Rendezvous and earn reward points.