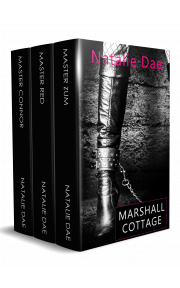 Pain of the pleasurable variety was all I needed—and Master Zum provided it.

I visited Marshall Cottage for one thing only—to be pleasured by Master Zum and the exquisite pain he offered. Actually, that was a lie. I visited to see him, to be touched by him in ways that told me he wasn’t just there for sex. Love, that’s what I wanted from him, to go along with the adoration I was so willing to shower on him. He was alluring, commanding, and I tingled all over every time he was near. I needed him, longed for him, and our time together was never a disappointment.

Nipple clamps, they were the order of the night—among other things. Could I handle them? Could I reach that sweet place I wanted to be in while he administered his brand of pain?

It had been hard to adjust to Master Red as he was known, who lavished praise and endearments on me as easily as scattering confetti. They sailed down, covering me, filling me with awe, and at first I’d wondered whether that was just his way. But something told me I meant far more to him than I’d imagined.

I needed the pleasure-pain he could give me—and if I were honest, love too. I couldn’t live without it. Or him. So when he took me into the voyeur room and made it clear he intended for us to put on a public show, I was excited that we were going to the next level. There were so many more levels after that and I wanted to experience them. I was ready for whatever he had to give.

And I intended to enjoy taking.

I needed a Master to satisfy my cravings. Would Mr M find the perfect man for me?

Master Connor was everything I’d ever wanted. How could I only visit him once a week without getting heavily involved? The truth was, I couldn’t. He was my dream Master and I aimed to be his dream sub. The thing was, I knew I’d fall in love with him, given half the chance. How could I not? He was charming, a good-looking man any woman would want as their own—and I quickly realised I wanted to make sure no other woman would have him. Did I have the courage to believe his words, though? He seemed sincere…

There was only one way to find out. Let myself agree to love him and see where the future took us. Otherwise, all he’d be was a one-night stand…

There were only so many days I could go without seeing Master Zumbadwey. I’d privately named him Zum, had never found out his first name, but that didn’t matter. He was my drug of choice, the one I’d found could satisfy all my needs without ever having to ask me what I wanted, needed. In short, he struck my arse, pinched my nipples and kissed me like there was no tomorrow.

I was due to meet him in five minutes beside the grandfather clock in its transparent casing, the innards lit up with a lilac neon light. Said clock stood proudly in the foyer of Marshall Cottage, although why it was called a cottage was anyone’s guess. Far from that, the building was more like a hall or mansion. Grand it was, and in years past had been lived in by some lord or other. I wondered once whether that lord would be turning in his grave to know what goings on occurred in his former home now. Seedy, debase acts, some would say, but I found them all rather delicious.

I sat in my car at the edge of the driveway, scanning the other vehicles. Zum wasn’t there yet. He was always late, but that wasn’t a problem. I found waiting for him a superb aphrodisiac. The tension, the apprehension…oh, I fucking adored it.

The moon and stars were out in force tonight, clearly visible seeing as there was no cloud coverage. It seemed as though nothing else existed if I stared at the sky for long enough, my vision tunnelling so that all I saw was infinity, much like what happened when I entered subspace. I’d be going there tonight hopefully, Master Zum pushing me, testing my boundaries.

I glanced at the clock on the dash. Four minutes to go.

A car drew up on the opposite side of the drive. Mercedes. Black. Windows tinted to what I’d assume were barely kissing the legal limit. A woman got out of the driver’s side then walked towards the building. I got a good look at her owing to the harsh light that blazed from the front of the cottage, one of those efforts used at football fields, except it wasn’t so big. She stood head to toe in orange PVC, her short dress as shiny as her long, black hair. She was a sight to behold with the red-bricked cottage for a backdrop. An extremely out-of-place character from Downton Abbey, slender, appearing more so because of her killer, gold-coloured heels. She exuded sexuality.

I adjusted my corset—black with red laces, the type that didn’t extend past my waist—and waited until she’d gone inside. Once she had, I got out of my car and surveyed the area again for Zum’s car in case I’d missed it, me standing tall on seven-inch black heels that tapered into daring thinness. With the chill of the air springing goosebumps on my bare legs, naked arse and shaved pussy, I smiled at how daring I was, planning to enter the building with my lower half nude.

I can come here naked if I want to…

Share what you thought about Marshall Cottage: Part One Box Set and earn reward points.