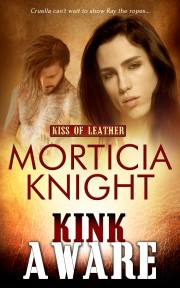 Book 9 in the Kiss of Leather series

Working at Rogue Ink is a dream job for Cruella, especially being around the hunky co-owner, Ray. Even though the money isn’t great, the eye candy and Ray’s caring heart make it all worthwhile. When Cruella risks rejection by inviting Ray to be their partner for a shibari class at Kiss of Leather, they’re thrilled when Ray accepts.

Cruella’s invitation both excites and terrifies Ray. He wants Cruella, but does he also want to become more kink aware? Still, he could kick himself for not already making a move on the sweet and beautiful Cruella, so maybe this is his chance. His protective instincts have gotten him into serious trouble before, so he’ll be sure not to make the same mistake with Cruella. They’ve made it clear they can take care of themself.

Cruella fears that Ray won’t accept their genderqueer identity and Ray aches to be the strong man Cruella needs. However, when Cruella’s dark past intrudes on their blissful present, Ray’s definition of strength might turn out to be harsher than Cruella is willing to accept.

Reader advisory: This book contains a brief scene of violence, references to eating disorders and the mention of a past abusive relationship.

Cruella eyed Ray from behind the desk at Rogue Tattoo, Piercing and Body Mods Studio, their gaze traveling to the tight as fuck, chocolate brown leather pants he wore, then drinking in the sinful way the supple fabric hugged his ass. When Ray reached up to hang his latest tattoo art award next to the entrance, his T-shirt lifted. Cruella held in a moan as Ray’s movement revealed the dimples at the small of his back highlighted by dragons facing each other above the tempting indentations. Cruella bit their lip then lifted their gaze to track Ray’s colorfully inked biceps that bunched and rolled as he completed his task.

What Cruella wouldn’t give to run their hands across the rounded, muscular butt of the man they’d been lusting after for… Almost a year? Even before they’d begun working the reception area at the shop, they’d been getting inked by Ray.

Back when I was still living with Tucker.

Cruella sighed, then returned to sorting through the new shipment of body piercing jewelry that had arrived that morning. Working at Rogue for the past six months had been amazing. They needed to focus on the pros instead of pining after one of the co-owners. They’d made a wonderful new friend in Liam, finally had a steady income and gotten off the streets and was surrounded by cool people. But more importantly, they weren’t treated like a punching bag the way they’d been before.

Be happy with what you have.

Ray stood back from his project, staring at the picture as he tilted his head. He regarded Cruella. “Does that look straight to you?”

It was hard to tell from the angle where Cruella sat, so they came out from behind the desk, tugged at the bottom of their black, stretch mini-skirt and took a few tentative steps toward Ray. They were careful not to stand too close. The temptation to touch was becoming harder to resist.

“I think the barest of taps on the bottom left corner, and it’ll be perfect.” Their voice tended to be soft and a bit breathy under normal circumstances, but whenever Ray was nearby, it became more pronounced.

Ray gave Cruella what they were sure was an appraising glance before returning his attention to the picture. He did as Cruella had instructed then moved back again. He crossed his arms and smiled, nodding his head.

“Yup. That’s much better.” Ray shifted on his feet then coughed into his fist before returning his attention to Cruella. “So, I was wondering if maybe—”

“Hi Cruella, hi Ray.” The automatic bell on the door went off at the same time as Liam’s voice sounded. His gaze darted between them. “Oh, sorry. Should I come back later?”

Cruella ducked their head as their cheeks heated. Ray mumbled something then sighed.

“Of course not, Liam. These are business hours, and anyway…” Ray let out what sounded like a growl of frustration. “Well, anyway, I have stuff to do.”

His face flushed and Cruella hoped, wished with all their might, that maybe Ray was flustered because he’d been about to ask them out. Even if it wasn’t anything more than hanging out for a beer, it would at least be something.

Maybe if he spends time with me, I can figure out if he’s someone I might want to start something up with. Cruella sighed. If he’s even interested in taking things that far.

Cruella had spent over a year waiting for Ray to make a move. They figured it was due to Ray being their boss. He’d always been very respectful and responsible, cared about doing the right thing.

Unlike some people I used to know.

Like Cruella, Liam tracked Ray’s hurried steps as he made his way up to the inking and piercing part of the shop above reception. Liam regarded them with a fallen expression.

“No, hon, you didn’t.” Cruella shrugged at the futility of it all. “There was nothing to mess up.”

They turned and went back to the desk to take a seat again. Liam was the only person who knew Cruella had a crush on Ray, but that was only because he’d guessed. Cruella had been keeping that juicy piece of info to themselves ever since the moment they first eyed the sexy tattoo artist.

Liam took a furtive glance upstairs, then rolled the other office chair next to Cruella. He leaned closer and brought his already quiet voice lower as he spoke, “I keep telling you he likes you. I mean, you know, wants to go out with you. On a date, I mean.” Liam huffed as he frowned. “You know what I’m talking about.”

Liam’s anxiety wasn’t nearly as pronounced when they spoke alone. Since Cruella tended to be quieter as well, Liam seemed less nervous around them. But when Liam did need a moment to take a breath, or had to abruptly leave the room, Cruella always understood.

“I do, baby, I do.” Cruella ran their long, purple fingernails through their hair. “And if I can figure out a way to ask him to hang without it sounding like a date, I will.” They locked eyes with Liam. “Ever since the situation with Tucker, I’m a lot more careful.”

Liam sucked in a sharp breath. “B-but Ray…he… he would never…” Liam’s breathing took on a frantic edge, and being mindful not to touch, Cruella caught Liam’s gaze again.

“Look at me, Liam. I’m not implying anything bad about Ray, all right? Let me explain.” They regarded him with concern. “If you need a minute—”

Liam shook his head, then let out a long exhale. “No. I’m okay. I was remembering your ex and I started thinking about all the bad things he did to you, then I thought about how Ray is so good and kind and funny and that he’d never do anything like that, and…and…” Liam rubbed the back of his hand across his forehead. “Wow. I shouldn’t have thought you meant anything bad about Ray. Don’t be mad?”

Cruella gave a light laugh. “I’m not mad, hon. Listen. I’m more careful because of my heart. I’m not being a big chicken, I promise. I want to meet another guy, I want to love again. But I don’t want to waste my love on someone who isn’t ready to be with someone like me, or who starts to hate themselves because they do, then…” Cruella lowered their head. “Then take it out on me.” They inhaled, lifting their gaze. “I don’t need to apologize to anyone for who I am. And I sure as hell don’t need to explain myself. If a man can’t handle that, then whatever. I don’t need them.”

“You’re right, Cruella.” Liam nodded. “I’ve begun feeling that way about my anxiety. Neal is always reminding me that it’s no one else’s business what I’m going through, and I don’t need anyone’s unsolicited advice or opinions, either.”

Cruella smiled, pleased to hear the conviction in Liam’s voice. His fiancé Neal had been such an amazing source of support for Liam. Watching them grow together as partners, both in love and business, had been a joy to witness.

“I admire you for learning that at such a young age, hon.” Cruella bit their lip. “Back then, it really mattered to me that people like me, accept me. I made it too much about what others thought rather than how I felt. More from men than others.” Cruella shrugged. “But I had a fucked up family, as you know, so there was also that.”

Liam fidgeted, and Cruella imagined his thoughts had gone to his own foster family upbringing. Rather than get into a contest of who had the worst time of it growing up, they’d instead become the type of friends who understood where the other was coming from without trying to top each other’s horror stories. They’d been down that road before too. At the age of twenty-six, Cruella was more interested in moving forward and not focusing on all the toxic bullshit they’d already been through.

Liam reached for them, squeezing their arm then letting go. The quick touch warmed Cruella. The gesture was rare for Liam, and Cruella understood the strong intent behind it.

“I think we both deserve lots and lots of love and happiness because of where we came from.” Liam averted his gaze as he picked at his jeans. “Which is why I think it would be great if you and Ray—”

Liam broke into a wide grin at the sound of Neal’s voice, and Cruella was relieved at the distraction. While they loved their friendship with Liam, they still weren’t sure when they were going to make the move with Ray and didn’t want to discuss how interested Ray might be.

But, it seemed as if Ray was about to ask me something when Liam came in… Cruella slumped in their chair. It was probably only something like whether I could cover someone’s shift. Cruella was always the go-to for shift coverage. They could barely get by as it was, so accepted whatever was offered as much as possible.

I’ll think of something. They had to admit that Ray was an awesome enough catch that if they didn’t make a move soon, someone else would.

A thread of fear coursed through Cruella at the thought of Ray finding anyone else. That’s it. This week for sure. Cruella tucked their hair behind their ears. Now all I have to do is come up with a credible invitation.

Share what you thought about Kink Aware PRINT and earn reward points.