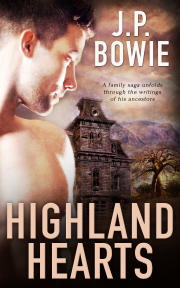 Callum Robertson has inherited his grandfather’s mansion in northern Scotland, but the house comes with a history he knew nothing about—should he be thrilled, or feel threatened as the house seems to lure him in?

When Callum Robertson first sees the old Scottish country mansion his grandfather bequeathed him, his immediate instinct is to sell the antiquated pile for whatever he can get for it—admittedly not much in a downturned market. Then he meets Craig MacPherson, a local farmer with auburn curls and sparkling gray eyes, and suddenly the gloomy old house doesn’t look quite the white elephant it first appeared to be.

Craig tells Callum that it’s rumored the house is haunted but by what or whom no one seems to know. Books flying off shelves then being mysteriously replaced give Callum pause to reconsider his rejection of the idea of an actual ghost haunting the place. When he finds a journal relating to the history of his family, he is, by turn, intrigued then fascinated as the saga unfolds through the writings of his ancestors.

An encounter with what he feels must be the spirit of his great-great-great-uncle Alistair makes him change his mind not only about selling the house, but also about his future with Craig.

Callum Robertson climbed out of his BMW and, with a fair degree of shock, surveyed the property he had inherited from his grandfather, Edward Robertson. The old man Callum scarcely knew of, had never met had bequeathed this—he wasn’t quite sure what to call it, but the word ‘folly’ might have been the one he was searching for. He’d heard it used to describe things that might have been built for decorative purposes only. What he was staring at wasn’t really a folly, despite the several griffin and gargoyle heads that lined the building’s walls and eaves. It could be lived in, he supposed, as he walked toward the several steps that led to an overly ornamental front door flanked by two rather stiff and comical-looking lions.

“Someone goose you?” he asked the one on his left, which stared back at him, a glazed expression in its strangely crossed eyes. Shaking his head, he inserted the large key into the brass lock and turned it. The heavy door creaked open and he couldn’t stop the wry chuckle that slipped from his lips.

“Cue the creepy music,” he muttered.

Once inside, he gaped at the size of the entry hall he’d walked into. The afternoon sun, streaming through the stained glass windows over his head, illuminated the interior better than any spotlight. All shades of greens and blues danced over the oak-paneled walls and marble floors and picked out the crystal prisms on the chandelier that hung in majestic splendor from the vaulted ceiling. To his right, a staircase curved upward to the floor above. It reminded him of the set in the musical Sunset Boulevard that he’d seen two, or was it three years ago, in Edinburgh, or Manchester maybe? He traveled around so much he found it hard to remember particular dates and places after a time.

“Amazing,” he murmured, then entered a large room off the cavernous entry. Obviously the living room, it too sported paneled walls adorned with portrait and landscape paintings. The furniture was shrouded in dust sheets—some, probably high-backed chairs, giving the appearance of silent guardians. Callum was glad he’d left the front door open or the silence would have been oppressive, but from outside he could hear the chirping of birds and the rustle of leaves stirred by a soft breeze that brought a fresh scent into this too long closed up mausoleum.

“What am I going to do with this lot?” he said aloud as he walked back into the entry and started to climb the stairs to the upper level.

“It’s all he had to leave you,” Matthew Cross, his grandfather’s solicitor had told him, “but the good thing is it’s free and clear, no mortgage to worry about, just the upkeep really.”

And that would be fierce. The place was huge. Seven bedrooms, Cross had told him, six bathrooms, a library, a dining room to seat twelve, a fully equipped kitchen and five acres of land. There was even a pool, thankfully indoors. He couldn’t begin to imagine how much it would cost to keep an outdoor swimming pool heated in Scotland. Even indoors it would be a bloody fortune, most likely. Well, he’d have to sell the place, that’s all. Although finding a buyer in a depressed market for a mansion north of Inverness, miles off the beaten track, and, from the looks of things, needing quite a bit of work, might just prove impossible.

He paused at the door to one of the bedrooms. Am I being an ingrate? he wondered as he pushed it open and stepped inside. In the dim light he could make out the shape of an immense four-poster bed that dominated one wall. He walked over to the window and pulled open the heavy brocade curtains letting welcome daylight fill the room. The bathroom was an eye-opener. A huge marbled space with an enormous bathtub on clawed feet, complete with brass fittings that included a hand-held shower.

“Nice…” He had a sudden longing to fill the bath and take a good long soak in sudsy water. Hmm… Much better than that plastic piece of rubbish in my flat. He caught his reflection in the large gilded mirror over the sink and stopped to peer at himself for a moment. He looked tired, he thought. There were shadows under his blue eyes. Too many nights poring over sales sheets and inventories. He ran a hand through his dark, almost black hair, then turned on the tap to splash his face with water. After a lot of rumbling and cranking noises, a thin stream of something brownish-yellow trickled out.

This book simply ticked all my boxes. With excellent characters, whether you like them or not, a back story that completes the picture, romance, steam, supernatural, sadness, hope - it's all here. I lov...

This read was quite a page turner. It is basically a romance with very raunchy and sexy encounters between Callum and Craig, also with a subtle mystery behind the secrets of the Robertson family...It was n...

Share what you thought about Highland Hearts and earn reward points.